How a comeback documentary became something else entirely 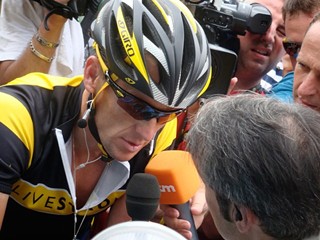 As detailed in the paper this week, director Alex Gibney’s The Armstrong Lie, which documents local cyclist Lance Armstrong’s 14-year insistence that he’d raced without performance-enhancing drugs, nearly never got made.

A film was readied; it was just going to be about something entirely different: Armstrong’s fabled 2009 comeback.

Things changed, for good reason, when news broke in 2012 that U.S. Attorney’s Office would launch a federal criminal investigation into the issue of Armstrong’s sincerity. When Gibney learned the seven-time Tour de France champion was set to sit down with Oprah Winfrey for an exclusive interview in which he’d reveal to the public his long-running relationship with PEDs, Gibney demanded that the two sit back down and, for his own camera’s sake, set the record straight.

The final product – The Armstrong Lie, in theatres Friday – demanded that Gibney shelve one film and restart with a new story, eschewing much of the feel-good “old man climbs the mountain one more time“ sentiment for something far more biting, investigative, and, ultimately, accurate. We spoke with Gibney by phone to learn about how much he had to change from film one to film two.

Austin Chronicle: How much of the film was finished when news broke that Armstrong was going to admit to EPO use?

Alex Gibney: The film was finished, but we put it to the side before Lance admitted to doping, because when there was a federal investigation, suddenly that put the whole thing in a completely different light. When there’s a grand jury criminal investigation, that gave us great pause. We just had to put the film aside and wait to see how everything would play out.

We made some pretty substantial changes, but still, there are some sequences from the original film contained within the final film. We made a very conscious decision. For example, we spent a great deal of time on the 2009 comeback year, even in the finished film. That was a key decision.

AC: How did the original film cover the topic of doping?

AG: The first film was not absent of allegations of doping. I interviewed David Walsh, who is a longtime Lance critic, back in 2009. What was interesting about that was how even Lance and his team knew I was interviewing Walsh. For them, they figured that they had it down. "Sure, bring him on. Walsh can say whatever he wants, but he can’t show us the positive test." I think that was one of the reasons why they let me talk to [Armstrong’s former doctor Michele] Ferrari. It was there, but most of the film was about the comeback. I figured that the comeback was about an athlete wanting to show he was still great, but also, it was a way of Lance trying to reckon with the past. The original film had the title The Road Back. The Road Back was the title, but it was also the road back into the past. It was "How do I put to bed all these past criticisms? I’m going to race clean and show them all."

AC: How many interviews did you have to secure after the storyline changed course?

AG: I had interviewed [former teammate] George Hincapie for the first film, and that interview was a lot different the second time around. I interviewed [former teammate Jonathan] Vaughters, who wouldn’t talk to me the first time around. And I had not interviewed Betsy. Both the Betsy Andreu interviews were done for the second film. I had interviewed Frankie [her husband, another former Armstrong teammate] for the first film because he was covering the 2009 tour. That’s an interesting interview, because there’s a piece of that interview that relates to the doping that’s in the original film. That’s about as far as you could go back then. I asked Frankie, ‘So, in 1999, was there a team doping program?’ Frankie pauses, and he pauses, and he pauses. Then he says, ‘I don’t want to talk about all that.’ That was his way of answering back then. It was his way of saying yes without saying, "Yes." That was as far as we could go back then, but I obviously needed to interview him again in the wake of all that had happened.

I told Betsy at the time: She was one of the few people, and I give her credit for it, who was a critic of Lance’s who would talk to me. She talked to me, but I told her I wasn’t going to interview her, because she didn’t have a direct connection to the 2009 race.

AC: And, of course, you got Lance.

AG: He figured he owed it to me to come clean for my film. He had lied to me, to my face. I also think that Lance is somebody who’s always very interested in his image and wants to have an influence in how it’s recognized. He was motivated, for a couple of reasons, to speak.

AG: He did, and that made me angry. What made me angrier was the fact that I had unwittingly become part of the machine, back in 2009. That, I think, was something that really did piss me off. I haven’t fully reckoned with that before. He had this arrogance that he could continue to speak the lie. He could never get caught. "Say what you want. Talk to as many critics as you want. Nobody’s going to believe them, because I’m Lance Armstrong, and they’re trolls."

AC: What were your perceptions of the doping accusations before the federal investigation began?

AG: I strongly suspected he had doped in the past, but I did figure, look, a lot of people were doping. That view was confirmed. Where things changed was, I was pretty convinced in 2009 that he raced completely clean that year. I would not say I’m so confident about that now. Lance swears that he didn’t, but, as Bill Strickland says in the film, I find that hard to believe.

AC: Could you tell, in 2009, that he was "looking beaten" when he was racing? Do you believe that’s what contributed to your treating the Tour’s conclusion like more of a fan, as you said in the film?

AG: I’m not that experienced of a cycling journalist, so it was hard for me to tell. I was dependent on other eyes to give me that sense, but there were cues. You can see, in his eyes, there’s a moment where you can see him looking off into the distance. He’s reflecting on the fact that he’s not able to kick people’s asses the way that he used to. You can almost see a sense of weakness or sadness. For all those reasons, that was one of the bits of evidence, to me, that he was racing clean. He says to me, "I intended to race clean." I think that’s true. My personal view is that he had an insurance plan, in case it didn’t work out. He was 38. He was old. It was pretty impressive, his performance. But he wasn’t the dominant rider that he’d been before. In fact, he wasn’t that dominant all year.

AC: The first film was billed as "The Ultimate Comeback Story." Do you have another four words to explain the final product?

AG: "The Anatomy of a Lie." That’s what this film is about. Dan Coyle, in the film, says, "It’s not a story about doping; it’s a story about power." It’s about how Lance used the power of his story to make himself very wealthy and abuse the trust of a lot of people and attack people who are trying to tell the truth. That goes way beyond cycling. I remain an admirer of Lance as an athlete, but I don’t admire what he did to other people as he protected his lie.

The Armstrong Lie opens Friday, Nov. 8. Visit our Film Listings page for showtimes and a review.