Unpacking a Wes Anderson movie is like digging through the world's most twee luggage set. 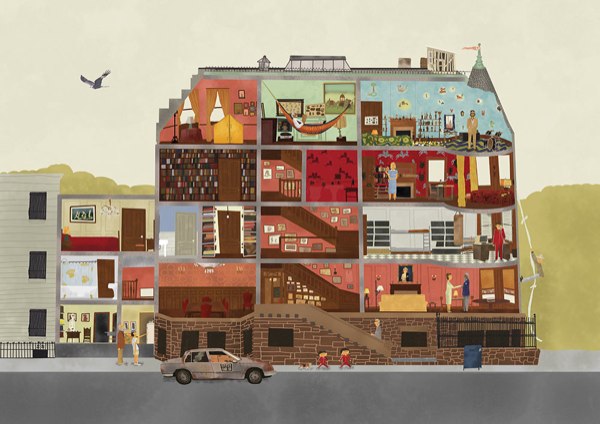 There's the bold sans serif font, the bright hues, the outsized caricatures, the Bill Murrays… You'd hardly be surprised if you found a vintage camera, a phonograph, and a pup tent all perfectly arranged at the bottom of the stuffed-to-the-brim Mary Poppins bag.

We'll write more about the book itself soon, but first there's a chance to watch Seitz work his magic with a case study live and in person: 2001's The Royal Tenenbaums, which followed the titular Tenenbaums through betrayal, misguided parental efforts, conspiracy, depression, addiction, canine drama, a hidden smoking habit, one bizarre wedding, and (miraculously) so much more. Its ensemble cast is captivating, its set pieces perfection, but to analyze down to the level of shots and cuts and Orson Welles influence adds another layer to an already towering cake of a movie. Also: the difficulty in recruiting Gene Hackman, the homage to Two English Girls. Tonight at the Alamo Drafthouse, Seitz deconstructs the film's prologue and joins the audience for a discussion after the screening.

Even 12 years after its release, the most dedicated viewer can still find new spots of joy in rewatching Tenenbaums, but there's rarely an opportunity to have such an experience curated by a veritable Anderson expert.