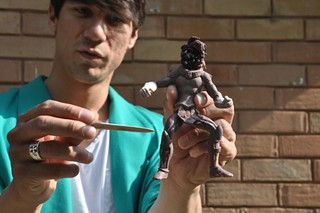 To possess even one artistic bone or whiff of rebellious means of achieving something outside life's neatly drawn box of restrictions is simply to exist truthfully.

For Nathan "Noise" Felix, an Austin indie/punk musician, the dream was to compose a symphony despite his lack of classical training – and then to convince a full orchestra to perform it and record the piece. "I just want this to go where it's supposed to go," said Felix.

No stranger to challenging conformity, Felix fell in love with the composition of classical music when on tour with his punk band. Skip ahead several years and across multiple musical endeavors, including The Noise Revival Orchestra Experience, to a car ride conversation between Felix and his young son, when the symphony composition idea was born. Over the next eight years, Felix bugged friends, read books, and worked late into the night, mostly in secrecy, to write Symphony #1 of The Curse, The Cross, and The Lion.

The album, which drops today, is full-bodied and imaginative – just as any cinematic score or classical music arrangement with a story arc ought to be – and Felix incorporates several genres and a handcrafted storyline, complete with action figures. The symphony's six thematic movements, such as "Funeral Montage" and "Lion's Roar" employ classical crescendos, driving percussion, and emotional string sections that combine with interesting dissonance and patterns usually found in less traditional genres. The unique symphonic form, and the opposing forces braided throughout each movement, played a role not only in the auditory result, but in the writing and recording processes as well.

Felix's self-taught method of composition led to nuanced interpretations and headaches in the recording process, particularly for composer Andre Lousada. In an ode to the frustrations and kicks in the shin felt by musicians and artists everywhere, even after Felix finished writing the symphony, it took a Kickstarter fund and a pile of rejection letters to make the recording dream a reality. Still, Felix believed in his dream to "let the music find its way."

The tale of Felix and his symphony is one of adventure, and in a partnership with local studio Art + Labor, filmmaker David Schulte directed a 19-minute short documentary covering the road to success. Currently entered into the festival circuit, The Curse & The Symphony will premiere in 2014, and in a lucky sneak peek, we were able to witness the fears and glory shared by the entire CCL team on the journey. The film also highlights the influences and contributions to the project by local KUTX DJ Laurie Gallardo and local producer and recording engineer Erik Wofford. See the trailer below.

The language between composer, conductor, sound engineers, and performance musicians was strained, but by allowing the nontraditional elements to survive, the music thrived. The Curse, The Cross, and The Lion is fantastic – fully poised to achieve Felix's goal to "break down walls."