Nutshell Your Screenplay for Success

Austin Film Society partners with the Screenplay Workshop for Seminar 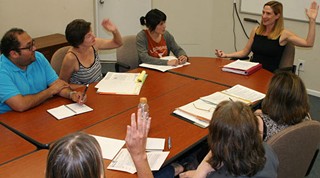 If, like many of us, you're still reeling after attending a full week of story-centric film festivals, your idea mill is either churning at record speed or it has ground to a halt from sheer exhaustion.

Perhaps today's undead sightings and sexy apples will trigger new characters and plots; maybe you have finally collected all those scribbled-on bar napkins. No matter the reason, it is essential to jot the story down, dig in, and determine whether the mystery of grandma's lost necklace is a workable script. But, how? Jill Chamberlain of The Screenplay Workshop offers her tried and true method: The Nutshell Technique. Just break it down and find the guts of your story.

When a friend signed up for a five-week Screenwriting Fundamentals class taught by The Screenplay Workshop’s founding director, Jill Chamberlain, I subscribed to the email blasts. "Someday," I thought, "I’ll get crackin’ on these ideas free-floating in my brain." Scraps here, busted story arcs there – but not much came of my half-assed efforts … until I learned to Nutshell last month.

Austin Film Society collaborated with the Screenplay Workshop, a teaching program utilizing group feedback and Chamberlain’s guidance, to present the Story Structure Seminar one Saturday in September. Billed as “appropriate for all levels of writers, from complete beginners to those who have already finished scripts,” I felt secure in my complete absence of pages or plot. I was a “clean slate,” according to Chamberlain during the class’s brief introductions, and that can be an excellent way to begin, with some instruction.

Chamberlain’s acclaimed method, the Nutshell Technique, is a streamlined process developed over years of writing her own screenplays and consulting on others’ 120-page works. A large percentage of the screenplays she has critiqued “look like a screenplay, smell like a screenplay…but [they] still fail to tell a story.” Instead, Chamberlain says, they just present a situation. The Nutshell Technique aims to pinpoint the heart of the story and eliminate glitches and gaps, and judging from my experience in the three-hour intensive, it does exactly that.

Twenty-one participants – six men and 17 women – sat in a portable building on the new Austin Film Society lot on a torrential rain-filled Saturday afternoon. Each student arrived with a different goal and origin story. One woman traveled from Guadalajara, Mexico, specifically to take this class, and an AFS board member brought his screenplay idea. A few people had completed an entire, or significant portion, of a screenplay; most everyone eschewed laptops for old-fashioned note taking with pen and paper. I will not give away the Nutshell Technique, but I will give a glimpse with a few highlights from my many pages of notes.

Most everything we know of dramatic storytelling stems from Aristotle’s observations, says Chamberlain. Her lecture began with a brief synopsis of comedy vs. tragedy, and the journey a story must tell. It is all about choices for our characters, and the white board classroom notes laid the groundwork for the eight essential items every screenplay must contain to be successful and engaging. Focused on feature films, though also applicable to shorts with a slight modification, the Nutshell Technique bullet-points common errors and explains how to repair them. Writing a screenplay that works means a writer “find[s] the pattern in the noise” and manages to tell a story about life – just with the boring chunks removed, Chamberlain says.

The only prerequisite for the class was a fresh screening of Tootsie, which Chamberlain used to demonstrate the story arc and her process. Straightforward and funny, but definitely down to business, Chamberlain packed information into every minute of the seminar. We worked through a worksheet – or, as I now think of it, the Golden Ticket – and Nutshelled Tootsie, driving home the key points. With an hour or so left, the fully engaged class put pen to paper and individually completed an exercise to lock in the lessons. For the remainder of the class, students were able to share their progress. Each volunteer received Chamberlain's full attention and helpful, specific feedback and suggestions for improvement. The clarity achieved in only three hours was remarkable. Weeks later, my ideas continue to churn, and I have already referred back to my Nutshell worksheet. I ought to laminate this thing.

The last line in my notes reads, in all caps, “MORE!” Lucky for us all, Chamberlain's seminars are ongoing. For more information on the course and registration details, check the AFS website. 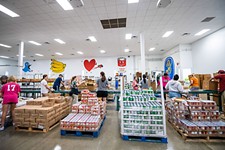