The Comforts of 'Veronica Mars'

Starting without Lowell, the discussion began by putting into perspective how much money the movie accrued via Kickstarter. Put simply, by Warner Bros. standards, it’s not much. Yet Thomas strived for something grand saying, “There are probably smart ways to do a $5.7 million movie, and we did none of them.”

Just as Thomas was expounding on the positive experience of having Kickstarter backers as extras, Lowell hustled into the ballroom with a large award in his arms. Turns out he had good reason for being tardy: He had just won the Narrative Feature Jury Prize for his directorial debut, Beside Still Waters. We'll let it slide.

Following talk of Kickstarted rewards (those T-shirts are coming) was a featurette with interviews and clips from the film set to be released in spring of 2014. It focused largely on the ongoing debate of whether Veronica should be with snobby sexual powder keg, Logan, or eternally reliable nice guy, Piz. Completing the love triangle in the movie is the beau Veronica is leaving behind in New York to come to the aid of a legally put-upon Logan. Lots of familiar faces were seen in the featurette including Wallace, Mac, and, of course, the eternally young and dumb Dick.

Thomas admitted to trying to get as many characters into the film as possible, including a slightly implausible run-in with Principal Van Clemmons. Thomas went on to say that working with the cast "felt like putting on the most comfortable clothes I own." Both Lowell and Thomas gushed over the show's star and most vocal cheerleader, Kristen Bell, calling her a "ball of light."

The Q&A revealed the writer-director's love of Friday Night Lights and its realistic portrayal of youth, but made clear that the teenagers of Neptune, Calif., had maturity beyond their years, so their dialogue in the movie will not seem much different from the show. Thomas likened his dialogue to the stylized discussions in movies like Heathers. In other words expect witty banter with noir undertones, in case you weren't already.

Questioned about his character's maturation, Lowell quickly replied, "Well, I got a fucking haircut." It will be nice to see Piz look a little less … floppy.

The perfunctory question about the future of the show was met with wild positing including the show becoming a "low-budget James Bond." Thomas admitted to picturing Veronica as a modern day Nancy Drew, only a bit more jaded, or course. 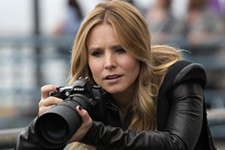 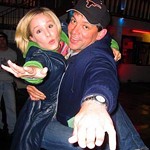