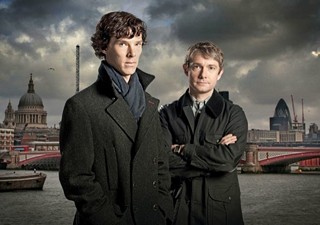 I say, good show! We've accumulated enough British TV news over the past few weeks that we decided it'd be best to put it in one place.

• The long-awaited third and fourth seasons ("series," in the British parlance) of Sherlock and Downton Abbey, respectively, will hit the States via Masterpiece just after the new year. Downton premieres first, on Jan. 5, with Benedict Cumberbatch and Martin Freeman's Sherlock and Watson returning two weeks later, on Jan. 19.

• For those who simply can't wait that long for a good dose of British TV, there's the Doctor Who 50th Anniversary Special: The Day of the Doctor, coming to town Monday, Nov. 25, 7:30pm, just two days after the big anniversary special.