Kickstart Your Weekend With 'The Bounceback'

Local filmmaker Bryan Poyser already did something incredibly difficult: He made a movie. 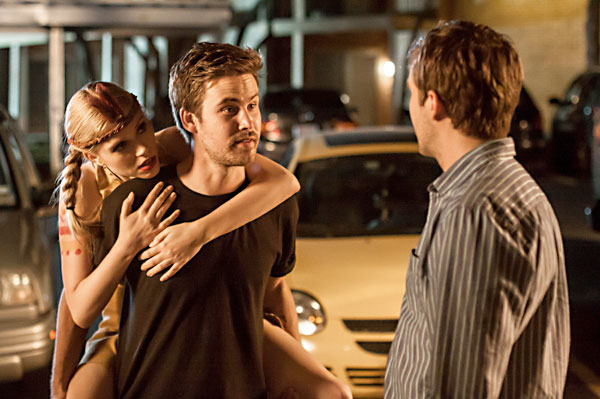 Not just any movie, either: The Bounceback, which premiered at South by Southwest this past spring, manages to have both "a surprising amount of heart" and several extended sequences of Air Sex.

But the harder part, he says, is getting distribution channels lined up so people can actually see the damn thing.

In an ideal world, that'd go a little something like this: Poyser would go about his daily life – sitting and enjoying a beer at a bar, maybe, or meeting up with friends – and people would approach him with cash-stuffed pockets to encourage him, like so many tiny Tim Gunns, make it work. You know, like so:

But as any kid who's ever scrapped door to door with a wagon full of wrapping paper or (who are we kidding – those things sell themselves) knows, it's not always that easy. Next best thing? Kickstarter.

Enter this crowdfunding campaign, which has a goal of $69,000 (insert middle-schooler giggle here) to take The Bounceback on a tour to cities near you, complete with Air Sex competitions and cast Q&As. If that's not enough of a perk, the crew's also offering everything from your very own Air Sex name (Poyser's is apparently Lunchmeat) to private Air Sex tapes, signed screenplays, and digital soundtracks to backers at various levels.