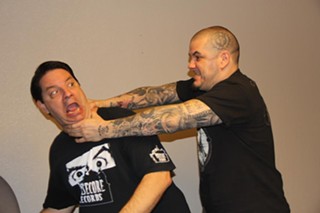 If you ask Corey Mitchell which nation is making the most depraved, disturbing horror movies these days, the answer may surprise you. As always, it's always the quiet ones you should worry about. "The Canadians are taking over," he said. "They have this ability to make the repulsive kind of beautiful."

Along with Phil Anselmo, Mitchell is part of the two-headed monster behind the inaugural Housecore Horror Film Festival.

His top film for the year is Canadian body horror Thanatomorphose. After that, he said, "Found is a very close second, and I'm really excited about The Profane Exhibit." But he calls Thanatomorphose "an experience that you've never had. … Combine David Cronenberg with the Toetag Pictures sense of gore. And it's not just gore for gore's sake. It's meaningful." A cousin to Fantastic Fest anti-zombie picture Halle, the film and its power can partially be credited to actress Kayden Rose, according to Mitchell. "She should be doing mainstream movies and winning awards," he said. "I don't think I've seen an actress going that far over the edge"

Many of the horrors out of the Toronto scene, including Thanatomorphose, feature the work of Remy Couture, the Canadian effects artist whose work and legal trials are chronicled in Art/Crime. That's another Mitchell recommendation, in which director Frederick Maheux examines how Couture's work was so graphic, extreme, and realistic that he was investigated for producing snuff films. That plays with another of Mitchell's top picks: Jovanka Vuckovic's The Captured Bird, executive produced by none other than Guillermo del Toro.

There's another doc, this time from well South of the Canadian border that Mitchell recommends: In fact, this one is pretty close to home. Slow Southern Steel, examining the modern Southern metal scene. Co-directed by Chris Terry aka vocalist CT of Rwake (whose concert film A Stone, A Leaf, An Unfound Door: Rwake at Maryland Deathfest also screens this weekend) tells the whole story of the NoLa metal story. "It's not just about the music," Mitchell said, "It's about the culture and racism and misogyny" – most especially how the scene has been misportrayed as a stereotypical redneck nightmare.

But don't think CT's picture got in just because it features bands appearing at Housecore. "There's no brother-in-law stuff," said Mitchell. "Even if you know us, your shit's got to be good." He initially rolled his eyes when he saw that one of festival co-founder's Phil Anselmo's security guard is a producer on Cut/Print, but soon changed his mind when he saw it. "It's perfect. It's got a lot of humor without being a horror comedy, and it's brutal."