How to explain how giddily charmed I am by The Michael J. Fox Show and left utterly cold by Robin Williams vehicle The Crazy Ones?

These new sitcoms do not divert in my mind as a matter of taste. And it is not a question of whether you liked Fox or Williams more in their previous careers as beloved comic actors. It's really a matter of principle: The Michael J. Fox Show plays like a pet project of an actor seemingly out of the game because of a daunting disease; The Crazy Ones feels rubbery, cheap, and artificial – a paycheck. 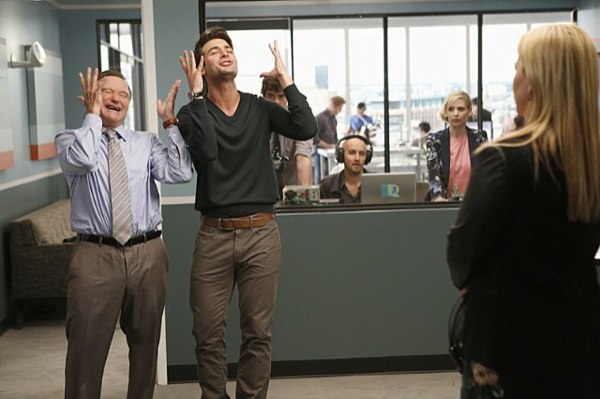 This is not to say that Fox's show is better because it feels more genuine. (His show can be overly broad and gooey, but it has bite.) The Crazy Ones is just so stridently disingenuous, it fails at a bizarrely ontological level: Is it a television show, or is it 22-minute commercial? Williams stars as Simon Roberts, an advertising mogul who runs a Chicago firm with his daughter, Sydney (Sarah Michelle Gellar). So far, each episode has centered around a campaign for a major, name-brand client like McDonald's or AllState. The show plays very fast and loose with media's church and state: The plot is the ads and the ads are the plot. The pilot was literally about snagging Kelly Clarkson to sing a jingle for McDonald's.

It's a shrewd mechanism to set the plot inside an advertising agency, because product placement would be an inherent part of the show's calculus – a quintessential having of their cake and eating it, too. But the plot and characters are so thinly sketched, they're porous. You see right through them to the ads: Behind Simon's desk in his office is a vibrant, floor-to-ceiling splashwork of various brands' logos; their sheer volume screams right through whatever exchange between characters is happening in front of it. The Crazy Ones feels crass because it eschews playfulness and just decides to play along. Creator David E. Kelley has meddled with this kind of fusion between directness and parody before (remember Ally McBeal?), but where his past hits have been spiky (if craven), this is pure hokum.

Which is disappointing, because it's assembled a spirited cast to play what feels like afterthoughts of characters, including James Wolk (Mad Men’s Bob Benson) as the randy copywriter with a nice haircut and dimpled smile and usually fantastic straight man Hamish Linklater as a the nebbish creative guy. Their vaguely raffish ping-ponging off Williams feels askew – his intractable honking clown nose act thrusts itself to the forefront of all his scenes. He doesn’t have any chemistry with Gellar, whom the show doesn’t seem to know what to do with; they’ve at least sped up her dialogue delivery in recent episodes to mime the cadence she mastered in Buffy. But what a mighty time we live in when Sarah Michelle Gellar is hired to play the uptight blonde who can’t take a joke.

Will Gluck (Easy A), meanwhile, has the good sense to get the obvious joke out of the way: As it should, The Michael J. Fox Show puts Fox’s Parkinson’s front and center. There were moments in early episodes where its self-awareness verged on ghoulishness, but it has wisely scaled back. It shares a lot of the same au courant sitcom framing devices as Modern Family (namely the mockumentary confessionals and saccharine episode-closing narration), but without the undercurrent of familial cruelty – you actually believe that this TV family loves each other.

Mike Henry (Fox) is a respected New York news anchor who returns to work after being diagnosed with Parkinson’s. The show skillfully treads a tone that is never exploitive and really, Michael J. Fox’s manic, meta energy comes from a similar headspace that made Tina Fey’s 30 Rock such a cutting cultural riff: Mike’s producer, Harris (a perfectly smarmy Wendell Pierce) sees Mike’s return to TV as easy, sympathetic ratings gold; Mike begs him not to air promo clips of him walking in slow motion with uplifting music. Such a sequence set to Enrique Iglesias’ “Hero” shortly follows. 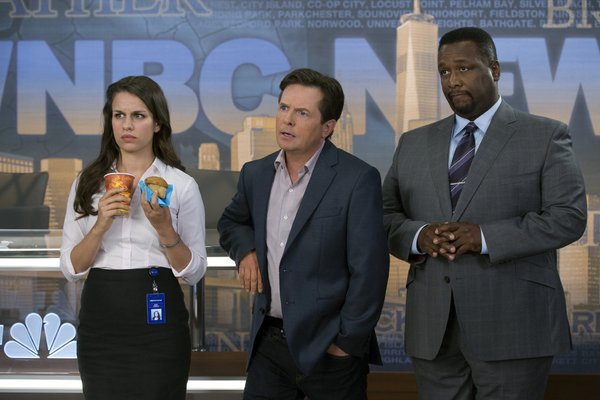 Is it an easy, even obvious joke that works on more than one level? (Mike’s return to TV is just like Michael J. Fox’s return to TV!) Sure. But broad comedy like this works when the cast is game and it’s executed with a wink. Fox and his new TV wife, Breaking Bad’s Betsy Brandt, have an easy relationship marked by playful teasing, sardonic rapport, and a sense of mutual respect – their interplay is like a buddy comedy nested within the show.

Their kids? Eh, they’re TV kids: impossibly precious and whip-smart, but they’re blessedly never grating, either. I like the freckled youngest son Graham (Jack Gore), who just sort of hangs out on the edges of scenes, look cute, and squawks snappy rejoinders. And like Gluck’s Easy A, the show has teeth, but is restrained enough to never draw blood. With the addition of Anne Heche as Mike’s conniving and crazed old rival, it’s already credibly stretching its wit.

Michael J. Fox has already been picked up for a full season (NBC was so high on the concept, it picked it up before seeing any footage) and with how ratings are tracking for The Crazy Ones, you can expect CBS to give the order for more episodes soon. Both shows’ respective networks have resisted pitting the actors against each other by scheduling them in competing timeslots. But it wouldn’t matter; there’s already a clear winner.