The Flesh and the Faith of 'We Are What We Are' 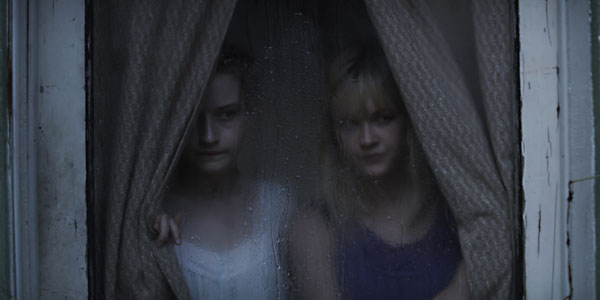 American gothic: Julia Garner and Amber Childrys in We Are What We Are, Jim Mickle's remake of Mexican horror Somos lo Que Hay

When director Jim Mickle eviscerated vampire tropes with 2010's Stake Land, horror fans lauded the arrival of a radical new talent. So there were some raised eyebrows when he announced he was remaking We Are What We Are. According to Mickle, he was the person that took most convincing this was a good idea.

When the proposal came to remake the Mexican genre festival favorite (also known as Somos lo Que Hay), he was leery of doing a remake. After all, there are more than enough pointless, big-budget do-overs of perfectly good movies as is. It was only when production house Entertainment One laid out their plans that he got interested. "They said, 'You can do whatever you want with it,'" he said. "That gave us carte blanche, so we came back and said, 'We aren't interested in doing a remake or translation, but if you let us do our take on it.' They said, 'Yes, that's what we want.'"

Like Stake Land, Mexican director Jorge Michel Grau's cannibal thriller was the toast of the 2010 festival circuit. Yet somehow, Mickle kept missing it. However, he heard all the buzz."I felt like I knew so much about it, even though I hadn't seen it." When he finally saw it, "it was nothing like that."

After the epic roadtrip scale of Stake Land, the idea of a family drama – no matter how twisted the family – appealed to Mickle. He transferred the action from Mexico City to upstate New York and changed the protagonists from two brothers and their sister (Francisco Barreiro, Alan Chávez, and Paulina Gaitán) to two sisters (Julia Garner and Ambyr Childers). After their mother dies, they try to keep a centuries-old family tradition going under the watchful eye and menacing hand of their father (Bill Sage).

Mickle already has one big supporter of his relocated tale: Grau. While he works on a prequel, dealing with the family history, "Jorge is doing a sequel of our characters."

AC: One of the fascinating aspects of Somos lo Que Hay was that it was an urban cannibal movie. Usually they're either suburban or rural. So how did you set on remote New York for your version?

Jim Mickle: That was the first step. Before the producers came to us, they had talked and brainstormed and said, "We were thinking about maybe New Orleans, because we need somewhere that needs a rich, deep, long cultural history." We don't really have much of that in America. [Writer Nick Damici] and I looked at each other and thought, well, I've been there, but I don't know any fucking thing about it. What I loved was the sense that Jorge was making a film about the place that he knew, people he knew. It was such a cool way to do it, so as soon as we started talking about New Orleans, we knew we don't know anything about this. It would feel dishonest to make a movie off this guy's film, which was so personal, honest, and unique, and to do a "let's make it up" idea. So that instantly meant we had to lock it into something we've known, so our pitch to him was that hopefully we're going to do send something as personal back to you.

I know upstate New York and have a place there and spend as much time as I can there. Hurricane Irene hit and wiped out our little town. It went from on Saturday, this great getaway weekend, and the next day it was a mini-Katrina. The power was out, we were stranded, and everyone we knew lost their businesses. It was the same place we shot Stake Land, so we had made this post-apocalyptic story, and all of a sudden it looked like that. At some point, I started filming stuff, knowing that we wanted to shoot a movie here. Not to exploit it, but to remind people. It missed New York City, so everybody thought it didn't do anything, but it destroyed this tiny little town.

We were trying to find the things about the original that we liked, and how are we going to turn that? One of the things was the whole lower-class urban thing, but we don't know anything about that. But we do know what it's like to be in a tiny rural town that got devastated and is trying to rebuild itself. Maybe that will be our replacement. Same thing with Michael Parks' character. You've got this detective who's facing corruption charges, and we don't really know that. My dad's a small-town doctor, so what if he's a small-town doctor, looking for his daughter? It's taking those beats that we like and either making it personal or just flipping it, like the genders. It became this great exercise.

"Religion is really the only thing that makes people feel strongly enough to kill people and wipe their hands because, well, God told me it's OK."
Jim Mickle on the shared faith of the Parker family in we Are What We Are.

AC: It's like that phase of British films, where you feel that modernity is pushing at the edges of traditional communities. Films like The Wicker Man, but before that with Whisky Galore! and The Titfield Thunderbolt. You're getting that now with things like The Devil's Rejects, and the same here, that there's not enough shadows to keep the old ways hidden.

JM: I liked not knowing the specifics in the original, but we wanted to make you care about these two girls. If we can set up these two characters as monsters but not make them the villains of the story, then we've got something interesting. It's not just a cannibal movie. It's a coming-of-age movie. To do that, we had to give it a really identifiable and relatable background. We talked it through, and religion is really the only thing that makes people feel strongly enough to kill people and wipe their hands because, well, God told me it's OK.

I was obsessed with Mormonism for a while, and wanted to make a Mormon horror film. Just this idea that this guy in the woods, only 200 years ago, looks in a hat and sees some stones and comes out and says, "I can marry all the young girls." And then it's this giant institution with a presidential candidate. It was such a young religion, you could really track the basics of how it went from one guy to millions of people around the world. I just thought was such an insane, crazy, scary sociological idea.

Nick's very history based, so we went back and looked at a lot of documents about the Donner Party. You read those diaries, and it felt like being able to weave all these things we were interested in and scared by.

AC: It's oddly timely, since there's recently been a skeleton disinterred from Jamestown showing clear marks of being butchered for meat. It's an element of American history.

JM: In Mexico, what Jorge dealt with in the original was a very lyrical, fantastical thing. I'd just come from a film festival and hung out for a week, and I was always infatuated that he always spoke about things as if he lived in a Guillermo del Toro way. I saw it not long after, and I felt there was still and element of that it in the original. That idea that fantasy is connected to everyday life. What struck me was how rigid and literal Americans are, and how we can look at history and religion and assign these very clear black and white roles: "That's the way I was taught; that's just how it is." Especially in interpreting the Bible. One half of my family are really religious. I love them, they're to me the greatest people of faith in the world because they're sweet and lovely and compassionate. And yet there's this other side of it that it seems so absurd to me. What's that line between cult and religion? I just find that fascinating.

AC: There's a rich strand of American movies dealing with cults, like The Sacrament, Martha Marcy May Marlene, Sound of My Voice, where people seem to be saying, "We've indulged this stuff long enough."

JM: I wonder if we've woken up to the Middle East and fanatics over there. I think the public is going, "OK, back to America," then looking inwards and going, "Oh, we have our own fanatics." It's not just "they're crazy, we're totally normal."

We Are What We Are is in theatres now. Find our review and show times on our listings page.