Captains on Deck at Wizard World 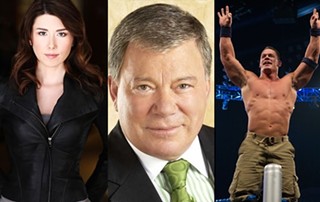 When Wizard World Austin Comic Con beams into town next month, there could be a power struggle over who gets the captain's chair. Two former captains of the USS Enterprise, Scott Bakula and William Shatner, will be exploring strange new worlds. Well, the Austin Convention Center.

For the fourth year, the traveling celebration of everything geek-friendly will be settling down in the capital of Texas. Originally designed as a way to dip a toe into the Austin scene, every year it's gotten a little larger, and now it's shaping other shows on the convention's calendar. In the last year, spokesman Jerry Milani said, "We added three shows – Portland, St. Louis and Nashville – and the model we use is Austin."

In its 2010 debut, the ATX Wizard World outing was the smallest on the circuit, but has expanded every year. After last year's show, New Yorker Milani was stuck in Austin as Hurricane Sandy pummeled the Eastern seaboard. Unable to get a flight home, he hunkered down in Austin for a few extra days, then headed to set up the next show in New Orleans. He laughed. "We are the first people ever on record to go to New Orleans to avoid a hurricane."

This year, the three-day Austin convention will be trailblazing again. For the first time, there will be a film competition for local filmmakers (see details here).

Its celebrity guest list includes film icons like Bruce Campbell and the ultimate leviathan of the comics industry – the one, the only, the incomparable Stan Lee, founder of Marvel Comics.

As always, there'll be some muscle power courtesy of the WWE. Last year, it was the straightedge superstar CM Punk. This year, it's former champ (and Make-A-Wish Foundation mainstay) John Cena and the Bella Twins in attendance, plus former WWE women's champion and pro-wrestling trail blazer Amy Dumas, better known by her ring name of Lita.

There will also be a whole bunch of new guests. "Some of them have never been to one of our shows before, and some have never been to any shows," said Milani. Those additions include the Karate Kid himself, Ralph Macchio and Kelly Hu (X2, Arrow) and the unstoppable James Hong, who has appeared in everything from Blade Runner to Kung Fu Panda. "He's a delight," said Milani "He's really sharp and really funny."

There'll also be some familiar faces, such as the hilarious double act of The Walking Dead's Michael Rooker and Norman Reedus, but they'll be bringing some reinforcements: Laurie Holden, who played the tragedy-stricken Andrea, (and is known to more seasoned genre fans as the unreliable Marita Covarrubias from The X-Files), and Chandler Riggs, aka the increasingly disturbing child of the zombie apocalypse, Carl Grimes.

But there's little doubt that having two former captains from the Star Trek franchise will be the weekend's big event. Last year, Austinites were treated to a reunion of the Next Generation crew. This time, it's the first and last captains of the Enterprise. Bakula has been a mainstay of genre TV, first as the time-hopping Sam Backett in Quantum Leap, and then as Jonathan Archer, commander of first ship to bear the name Enterprise. As for Shatner … it's Shatner. Bon vivant. Raconteur. Humble egomaniac. There are few opportunities to share a room with a true behemoth of modern culture, and this will be one of them.