ABC's new show gets the comedy kiss-of-death: It's boring 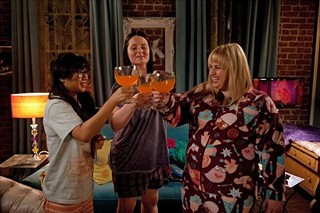 Unfortunately, the story of how Super Fun Night, the new comedy created by and starring Bridesmaids and Pitch Perfect standout Rebel Wilson, made it to air is more interesting than the show itself.

Originally developed as a multi-cam sitcom at CBS for a fall 2012 debut, it quickly added Conan O’Brien as an executive producer. After CBS passed on the project, it was retooled at ABC as the single-camera comedy that begins airing tonight.

But tonight’s “premiere” isn’t actually – ABC swapped the pilot with the show’s second episode as the “series premiere.” It’s never a vote of confidence when a network messes with a show’s episode order. In the end, it doesn’t really matter for the viewer: Neither the joyless original pilot nor this lopsided second episode would be a good introduction to any show, though it being the latter seems like an especially misguided move. We’re thrown into the show, about up-and-coming lawyer Kimmie Boubier (that’s BOOB-E-AY) and her two best friends’ pact to stop being boring and start having “super fun nights,” without any introduction.

Now, greater shows have been made out of thinner plots (Friends and Seinfeld being prime examples), but it would have helped Super Fun Night to have first aired an episode that helps orient the viewer to the internal dynamics of the characters, who behave more like outlines of stand-up material than actual people: Boss With An English Accent, Brittle and Competitive Work Frenemy, Brash Butch Best Friend, Quirky and Socially Impaired Asian Friend. But they also aren’t charmless enough to be unfunny—so they’re just boring, which in comedy, feels so much worse.

Wilson sort of sputters out in this role. Bizarrely, she’s using an American accent, which she seemed fine using in Leslye Headland’s Bachelorette in a smaller supporting role. But here, where she’s in every scene, she seems distracted trying to maintain the accent and do whatever slapstick the show puts her through. It’s hard to tell whether Wilson’s performance is so muddled to the point the show loses all its energy or if the show is just awful. I suspect it’s some permutation of both.

As with her Fat Amy character in Pitch Perfect, Super Fun Night is over-reliant on making jokes at the expense of Rebel Wilson’s weight. What helped in Pitch Perfect was that Amy had gumption, her native Australian accent, and agency: She created the nickname “Fat Amy” so her bullies couldn’t. On Super Fun Night, the fat jokes feel lazy, a panic-button response to punch up a scene. The show’s underlying conceit is about a group of women banding together to shake themselves out of their collective rut – a potentially bold riff on Lean In-style motivation swatted away for scenes of Rebel Wilson struggling to put her Spanx on. In tonight’s episode, Kimmie and her friends go to a piano bar to help conquer Kimmie’s fear of public performance. It’s no spoiler that she finally gets up on stage and sings, but it’s a boring victory.