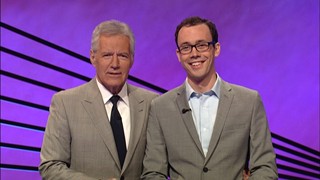 If Austin’s seemed smarter of late, it might be because two of our dearest residents have spent the past two weeks dominating Jeopardy! and all the highly intellectual trivia masterminds who come with it.

The two residents are named Jared Hall and Neal Pollack – yes, that Neal Pollack – and together, they’ve turned in one of the greatest one-two question-and-answer punches in any city’s illustrious history: Over a 10-day span, the two combined won nine total episodes.

Hall, a 24-year-old researcher at the University of Texas who earned his Master’s degree from the LBJ School of Public Affairs in May, was the first of the two to emerge from the Jeopardy! Thunderdome victorious, winning six times over two seasons (he taped two episodes in April before coming back for his final five, which included a loss, in July). A Cedar Rapids, Iowa, financial analyst named Matt Volk dethroned Hall during that seventh try, but Pollack came in and reclaimed the crown for our fair city one day later, coming from more than $8,000 down to win $26,000, besting Volk ($25,000) and also-ran Loni Geerling ($24,000).

Pollack, who many will recognize as that mildly erratic author and part-time punk god whose books journey into the satirical and often come out a little demented on the other end, described his three victories as “a big mess,” yet still managed to walk away from the show Friday afternoon with $60,798 in hand. Hall, meanwhile, executed a much more traditional path toward victory, achieving a “Lock Win” (meaning he had more than double any contestant’s earnings by the end of Double Jeopardy) in three of his six victories. By Sept. 20, when Volk knocked him out, he’d already earned $181,001, placing him ninth on the all-time earnings list of Jeopardy! contestants.

“Jared’s a cool customer,” Pollack noted Friday afternoon, a few hours before watching his Jeopardy! run go down in flames. “He wins without a lot of panic, whereas I’m flailing all around.

Hall will almost assuredly go on to compete in this year’s Tournament of Champions, which takes the top 13 competitors as well as the winners of the College Championship and Teachers Tournament, though he’s yet to get the confirmation call. Pollack’s technically eligible – you need to win three games in order to get into the pool – but he’s facing long odds, which is quite a big bummer. It’d be fun to see these two Austinites face off, flicking at their triggers and trying to form appropriate questions for the clues that Alex Trebek throws out.

“When his first two victories aired in June,” Pollack remembers, “I looked at my wife and said, ‘I may have to play that guy.’ She said, ‘Oh, you don’t want to play that guy.’ I could beat him in the right circumstances, but it would have been hard. Until the end of his run, he was really in control of the situation. At the same time, for me, it was really great to watch him work.

“I have an enormous respect for the way he plays the game. He’s definitely going to the Tournament of Champions, and he’s got a chance to win it. He won $180,000-something, and that’s one of the best totals of a non-Tournament player of all time – in the 30-year history of the game.” 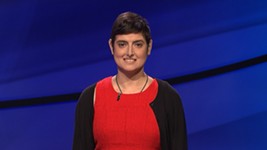 A Jeopardy! Champ and Champion for Cancer Research
Austinite who passed away in December pledged her winnings to research