There's No Escape From Tomorrow

Director Randy Moore on fair use and Disney princess culture 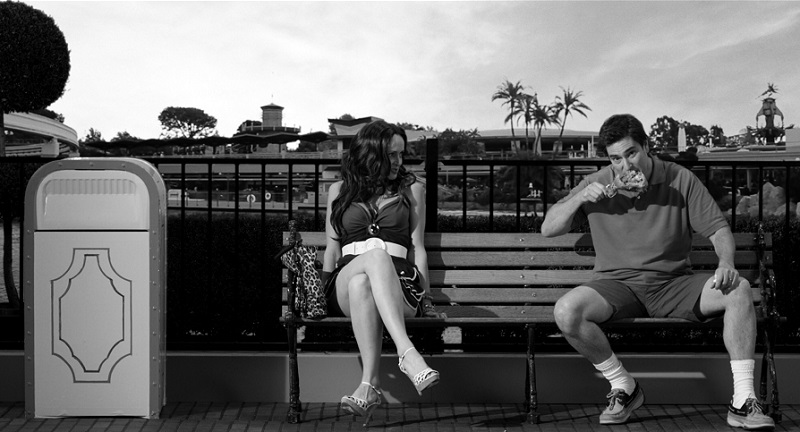 Escape From Tomorrow, the movie shot bootleg-style in Disney World and Disneyland, is a searing social commentary on the power of the House of Mouse. But for director Randy Moore, it's been a personal experience that's had a physical impact. "I was 215 pounds when I started the movie, and by the end I was 168."

Like many Americans, he has an emotional and visceral relationship with the parks. As a child, he would visit his father during summers in Florida. "It would become a ritual every time I would see him. We would go to Disney World and EPCOT, and that was the house that I knew my father in." As he got older and their relationship evolved, his relationship with the park changed. "Not that it became a sinister character in my life, but I started to see through the cracks in the veneer."

As a father himself, he has taken his own kids there, and as they took the same rides he had ridden as a child, it became "this really surreal ghost town. … All of a sudden, I had these rushes of emotion and memory from when I was there with him."

There was another family influence on the picture: Moore's wife was born in Kurdistan, and did not have the same instinctual response to the Happiest Place on Earth that so many Americans have. Moore said, "I got to look at the park and the fever and the craziness of it through her eyes."

Austin Chronicle: You shot in the parks, while other filmmakers have talked tangentially about them, like Wally World in National Lampoon's Vacation.

Randy Moore: I love that movie, but that was a road trip movie about getting to the park, rather than the experience of park and the whole corporate religion that surrounds Disney. Its tentacles are spread into every part of our existence, from early childhood. It's everywhere. You can't escape it. I was in Tokyo at the top of a skyscraper last year, and for some reason overlooking the skyline there was this strange, golden Mickey Mouse, slowly rotating. It's such a huge force. I almost feel like, if you magnified Americans' DNA, you could almost see tiny little Mickey Mouses in the strands. It's got into us so deep. So there was really no other place for me to do it. It wouldn't be easy to shoot there, but I guess I'm up for a challenge.

RM: I went into it with more of a feeling that this is something I should be able to do. I didn't consult with lawyers. If I had to give a class to aspiring filmmakers, I would definitely tell them not to follow that advice. I just felt in my gut that it's OK to critique intellectual property. We showed it at Sundance, and then we brought in lawyers. I made a point that I was not going to show any lawyers until we had our first cut, because I knew the moment that I showed it to lawyers, I knew things would start to change, and I wanted to have one pure cut, just based on the way I wanted it to be. Fortunately, we didn't have much problem convincing companies that the picture was protected under the Fair Use Doctrine.

AC: Disney isn't the only corporation within the park. There's a whole sequence dealing with the presence of Siemens at EPCOT, with the German engineering firm acting like strange rebels in a corporate cold war.

RM: Siemens, on their website, says, 'We make the technology that brings the magic to life,' and I just thought, that's great, that's so ripe for a conspiracy. They shine with lasers the word Siemens on top of the giant geodesic dome after this huge fireworks show every night. The fireworks show is sponsored by Siemens; that ride that's inside the dome is sponsored by Siemens. It's a strange entity in and of itself, in the fact that they've paired up with Disney. It just made ideas spring up left and right.

AC: Of course, this all means that you have a lot of established iconography that you can subvert, like the two French schoolgirls who are very reminiscent of young but sexualized Disney's princesses.

RM: As the father of two young daughters, that seems to be a little worrisome that their grandest ambition is to be a princess. If they enjoy doing that's fine, but it's strange that no one seems to be making more of that.