And if you weren't before, you are now 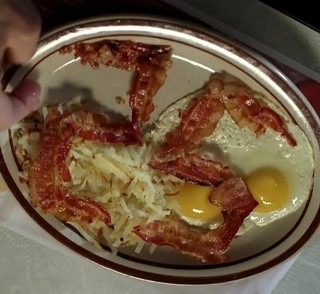 In case the title didn't give it away: Spoilers ahoy!

The series finale of Breaking Bad airs Sunday night, and I'll be sitting there at the edge of my seat along with millions of other watchers … maybe not quite as it airs, but at 4am or whenever Amazon decides to deliver the next episode to my inbox.

I've been with those millions almost all along – I started in at some point in season two, I think, and, like so many others, devoured everything that had aired to date in way less time than I'd care to admit. I've laughed, I've cried, I've screamed Vince Gilligan's name in vain as his executive producer credit popped up at the worst possible cliffhanger at the end of episode after episode. I've defended the hype, rewatched seasons with newcomers, and become immersed in obsessive (and, let's face it, borderline unhealthy) discussions about what's going to happen when.

Really, it doesn't matter what I think – Gilligan and his writers have already done their duty, and Aaron Paul and Bryan Cranston seem at peace with the conclusion – but a show's cinematographer doesn't get to say something like "Every single storyline will be buttoned up, and there will be no loose ends" without expecting fans to analyze every last scene in psychotic detail.

So here we are, with 25ish questions that pop to mind midway between the ultimate and penultimate episodes of one of the greatest series on television. (Apologies in advance if you'd long forgotten about any of these details and are no longer content to let them lie. Don't say I didn't warn you.)

• Now that Walt has led the sheriffs to his tucked-away town in New Hampshire, law enforcement is getting close, and it's starting to look like a game of Clue: Who's going to catch him, where, and under what circumstances? In the inimitable words of Jesse Pinkman, he can't keep getting away with this.

• He was last seen at the bar, but his stool was empty in the closing scenes of last week's episode. Thanks to the flash-forward scenes, we know his ultimate destination is New Mexico, but who does Walt go for first?

• How's his cancer progressing? It certainly seems worse, but was that inevitable or does it have more to do with his intermittent chemotherapy?

• Did he ever watch Mr. Magorium's Wonder Emporium?

• Does Walt survive the finale?

• What ever happened to Jesse's family? Is his little brother still smoking pot? Something worse?

• What about Badger and Skinny Pete?

• Jesse presumably spilled in his tell-all about Brock's poisoning by way of ricin. Will that make whoever the second vial is bound for easier to diagnose?

• Speaking of Brock, what happens to him now that his mother is dead?

• Do lovable sociopath Todd and paranoid businesswoman Lydia get together and live happily ever after eating pints of Americone Dream together?

• Regarding Lydia, how much has the DEA figured out about the Czech Republic distributor? They were onto Madrigal Electromotive, anyway…

• Will she remember her father or get his money?

• Does Saul ever get to run that Cinnabon in Nebraska?

• What ever happened to his bribe-accepting office manager, Sweet Tits aka Francesca?

• Will the feds find Hank and Gomez's bodies? Will Marie get any closure on her loss? She was awfully quiet in the last episode; was that just the calm before the storm?

• Gomez and Hank were the only ones who knew where Huell was. Now what?

• Anybody going to figure out about the junkyard owner?

• If, as some people suggest, Walt is heading for the neo-Nazis with the weapon, who's going to end up with the ricin?

• Will Walt confront Gretchen and Elliot?

• Was he upset by their undermining his role in Grey Matter, or more upset by the fact that "his" meth was still out there, implying Jesse had been cooking again?

• Last but most assuredly not least: Has Walt Jr. aka Flynn been getting a satisfactory variety of breakfast at Louis' house?

Or maybe it'd be safer to just forget all of this and let the finale do what it's going to do. And hope against hope that Walt enters witness protection and lands on Malcolm in the Middle, Todd lives on as Landry on Friday Night Lights, and Jesse can ever be as happy as he was on The Price Is Right.

The House Is Rockin’
A final tune for ‘Breaking Bad’