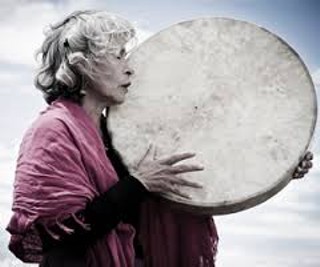 Arise, with its vibrant and artistic cinematography, takes a less dogmatic, more compassionate route than many of its environmental activist counterparts, despite their shared message of the necessity for urgent change.

By celebrating the women of this movement, their cultures, and the already thriving and significant work being accomplished toward goals of Earth democracy, biodiversity, and gender equity, Arise is an important film for its promotion of global unity and progress though the support of women and girls, and specifically, Mother Nature.

In addition to various components of environmental activism, the Earth's cultural diversity is well-represented in this documentary by filmmaking mother-daughter duo Lori Joyce and Candice Orlando. The film introduces several women from around the globe who work doing everything from establishing restorative seed banks to transforming dumps to city parks. In an ideal example, an all-girls school in Kenya uses a bio-latrine that converts waste to methane gas used to power the school's kitchen stoves. Actress/activist Daryl Hannah narrates by bridging portraits with ethereal poetry, some lines resonating more than others; music by artists such as Elephant Revival and Michael Franti flows through the film's background. As we learn in the film, respecting and upholding the connectivity between humans and their environment – both local and global – is essential to the physical and social manifestations of both entities.

In the portraits, Dr. Vandana Shiva, founder of Navdanya Farm, says, “organic farming can do miracles” and specifies that women are the backbone of agriculture in India. Winona LaDuke, an American Indian and environmental activist, spoke of her multifaceted purpose that includes a focus on preserving her native Anishinaabe culture, ceremony, and foods, such as wild rice. Honoring the “foremothers” is as important as forging an eco-friendly future in intellectual capital such as solar panels and wind turbines. In Colorado, Beverly Grant, founder of R & B's Mo' Better Green Farmers Market, speaks to the “part of [women's] divine design” that is, by nature, a caregiver.

In the South Bronx, Majora Carter fortified her role as environmental activist and role model for young girls by recognizing early in life that her roots as a woman of color raised in a poor neighborhood give her the strength she needs to make significant change. In addition to defending the Earth and its people, “your life is something special you need to protect as well,” she advises. Monica Chuji is an Ecuadorian Quechan activist that sees direct links between nature and human rights. Starhawk, an activist in San Francisco, says, “Permaculture is the practical application of the belief that the earth is sacred," and describes the need for a “mosaic of solutions” for healing the ecosystem. Bata Bhurji informs the audience of the Barefoot College in Tilonia India, founded by Bunker Roy. Enrolling predominantly women, the school focuses on teaching skills, such as solar training, to women of rural villages who would most likely otherwise never attend school. The transformative self-confidence of the women and the useful lanterns that illuminate their villages have a lasting impact on both humans and the planet.

Dr. Theo Colburn, a renowned activist living in Colorado, started her career in environmentalism much later in life than many of her peers. Her contributions to the research of endocrine disruptors and toxic chemicals' effect on human, however, are outstanding. In an explanation involving fracking, tumors, and breastfeeding, Colburn says, “We should be electing people who represent the people and not the big corporations." Maggie Fox of the Climate Reality Project said, "Change always begins with people" and mentions that when women see a problem, the connection to life requires they act. "The rate of climate change has awoken the most powerful voice – the voice of women," she said. In Kenya, Jessica Posner works diligently facilitating the academic and social progress at her all girls school. It is innovative models and integrated solutions that will change the world and reduce or eliminate "extreme poverty and gender inequity," which are "inextricably linked," she explained. Aida Shibli, a Bedouin peace activist, tells her story and her contribution to creating communities for mutual support and her work to "gather women and collect their wisdom" to enable peaceful solutions.

Though Arise, made by women, about women, specifically highlights the bond between environmentalism and feminism, the film is a colorful introduction to these missions, created for everyone, regardless of nationality or gender. Both movements indicate the need for a global shift in values to combat the pressing need for environmental and cultural reforms that transcend borders, a dire strait mentioned by many of the women, and yet Arise balances evidence with emotion, yielding a film suitable for teaching, exposing, and gently informing.