Can James Spader and Megan Boone pull this off all season?

What makes the premiere of NBC’s The Blacklist so promising, so worthy of tuning in for a second episode, is that every time I was ready to write this thriller off as a rote also-ran, it flipped the script.

Though the pilot, directed by Joe Carnahan (The Grey), plays into plenty of the genre’s tropes, it eschews a few in gutsy fashion. Its greatest success, though, is creating an environment for James Spader to be the egomaniacal sleaze he’s best at. 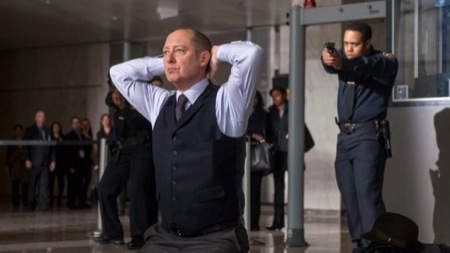 James Spader stars in The Blacklist.

Spader plays Raymond “Red” Reddington, a master criminal-for-hire who decides, for reasons unknown, to turn on the criminal community and starts helping the feds catch members of his blacklist, an elite group of bad guys that belong to a higher echelon of evil than the FBI’s Most Wanted list. But as evil geniuses on television do, he has quirks; he’ll only work with Elizabeth Keen (Megan Boone), a fresh-out-of-Quantico criminal profiler whom he’s never met. When he demands to speak with her, and only her, it’s her first day in the field, and it’s a doozy: Reddington tells her that a supposedly dead terrorist is plotting to kidnap the daughter of a high-ranking American military general.

The pilot moves at a nice clip, quickly throwing Elizabeth (and the audience) into the action as she works through Reddington’s cryptic clues to not only find the terrorist, but also understand his motivation. There’s an interesting, consumer-grade psychoanalytical angle to how Redding operates: He instructs Elizabeth “to stop thinking like a cop,” to stop thinking “objectively” when it comes to catching the criminals on the blacklist. This is instructive for the audience, too; the show portends, as loftily and boldly a pilot can, that while this may look like the kind of drama cast from the mold of shows like Bones – mischievous genius teams with brassy beauty – it isn’t interested in intervening moments of levity.

The show it most resembles, at least from the outset, is actually J.J. Abrams’ Alias. But while Reddington and Elizabeth’s relationship establishes a spiky, adversarial tone not unlike the cold, reluctant partnership between Sydney Bristow and Arvin Sloane, these two form an allegiance out of necessity, but also out of obsessive interest. Spader, who for years vacillated between being a sleaze and a cad in The Practice and Boston Legal, is in a role where gets to utilize his full grimace without the show trying to soften his edges. He finally gets to be a true villain, and you can see that he’s reveling in the opportunity. There’s something about James Spader, perched in various cells, chambers, and holding rooms, doing malevolent line readings that feels perfect. Boone, though, is still an interesting question mark, because it’s in her scenes where the show indicates it wants to take risks. Yes, Elizabeth is saddled with a humdrum, long-lost, deadbeat criminal dad complex that will undoubtedly play into future plots, but she’s also at the center of some surprisingly tense moments in the pilot. The show seems willing to veer off, to have Elizabeth not behave like so many other women in procedural dramas are made to; where she would normally be weak or overpowered, she’s strong. Boone, with those eyes that flicker between vulnerable and carnal, has a promising, convincingly layered debut.

It’s hard to know – especially judged solely on a pilot, which are often produced on a much larger budget and are typically poor representations of what a show will actually be like – whether The Blacklist’s central conceit of Reddington and Elizabeth working together to hunt down members of the blacklist will become plodding. (Though it certainly presents plenty of possibility, there’s a fascinating problem happening this fall season where new shows are either too tightly structured or underdeveloped, both instances resulting in series more boring than they have any business being.) But like Fox’s Sleepy Hollow, which debuted last week, The Blacklist seems so confident in itself, you want to see if they pull it off.