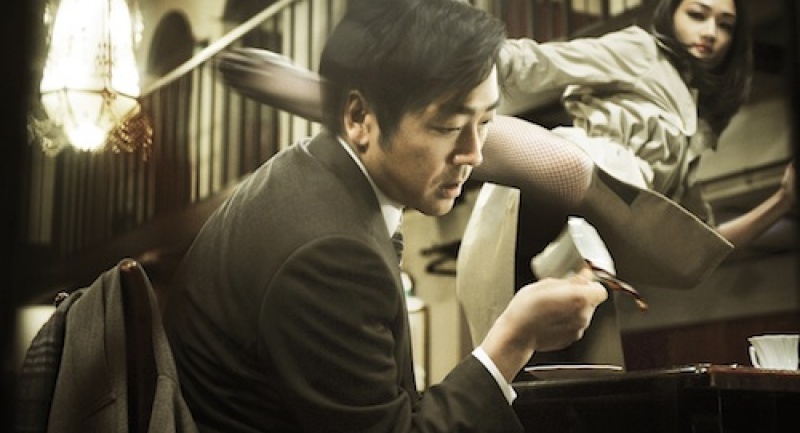 And it just gets funnier and weirder. The kinky, glorious, hilarious R100 at Fantastic Fest.

Update: Drafthouse Films announced Sept. 26 that it had acquired R100 for theatrical and VOD release in 2014. It joins Borgman, The Congress, Nothing Bad Can Happen, and Why Don't You Play in Hell as a Drafthouse Film that showed at Fantastic Fest.

When a pleasant date in a restaurant ends with an ecstatic roundhouse kick to the head delivered by a domineering woman in bondage gear, it's clear that Fantastic Fest fetish comedy R100 is going to crack the whip at its own pace.

If you don't know what pinku eiga is, please, do not Google it randomly, and sure as hell don't do an image search. It's the coverall name for Japanese fetish cinema, often showing kink as something (mostly) harmless, often as a metaphor for the human condition. Or just as really, really weird and self-aware smut.

Take the case furniture store worker Takafumi Katayama (Nao Ohmiri.) He signs up to join an S&M club in which a one-year membership buys you a very peculiar service: Latex-clad queens will randomly appear in your life and submit you to some form of submissive play. It's sort of like Fight Club, but only one person is doing the hitting. Or spanking, or kicking with six-inch stilettos. Or tying someone up, blindfolding them, and doing impersonations of their friends and family. The experience for the audiences: One man's secret vice is everybody else's hilarious kink.

The title, R100, is a reference to Japan's rating system. Katayama's increasingly bizarre and oddball moments of pleasure and fulfillment, indicated by a Zen-state smile and a ripple of the air, are so unusual that they redefine unacceptable content. As the sessions become more bafflingly unique and random, he heads to the one thing he lacks in his life: joy.

This is when Matsumoto pulls the rug from under the audience's feet. Bar the traditional family shared bath, R100 is actually nudity-free, and the random moments of S&M play are so quirky, so obtuse that you ask yourself (to quote Web Soup), "Wait, is that even a thing?" Is this perversion, or something much sweeter?

The comedy comes from the endless succession of dominatrices or queens, each with their own bizarre specialty. Matsumoto gives each their own little twist, and flips from hidden-camera style antics to one oddly elaborate dance routine. To reinforce the situation, he repeatedly ruptures the fourth wall to show the censors during a screening of the movie, trying to work out exactly what they're watching. Never before has a Greek chorus seemed so little in control of the narrative.

Matsumoto isn't just endlessly, willfully, bizarrely funny. He's also capable of surprising tenderness (a major subplot is presaged simply and to great effect through the appearance of a pink toothbrush.) It all adds to Katayama as a rounded character, rather than allowing him to be some guy that gets his rocks off by being accosted by dominatrices.

Much like Big Man Japan, R100 builds up the insanity until a third act turn into the gloriously perverse. Arguably, it's a little more controlled than his kaiju spoof, which becomes positively headscratching. Or maybe that it's writ so large, in such a ridiculous and pleasingly tortured stretching of the idea, that it gets away with it. Either way, it's genuinely and perversely hilarious.