Ecstatic Highs, Then Bluer Than Blue Can Be

Mood Indigo, a Michel Gondry romancer, will make you wish you’d paid more attention to high school French class: It’s such a colorful whirr of geegaws and doodads and other strange delights that pausing to read the subtitles means you’ll miss some of the spectacle. 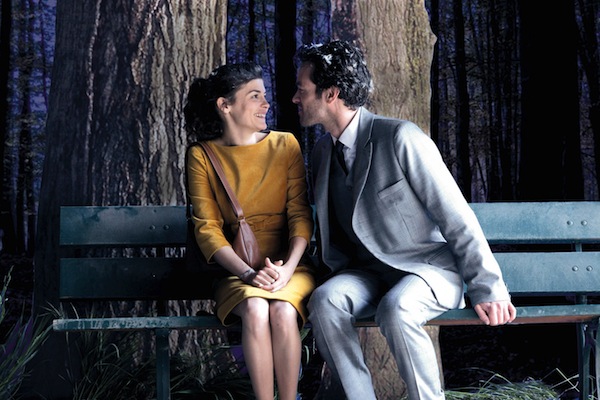 It’s a simple enough story (adapted from the novel L’Écume des jours by the French surrealist Boris Vian). Independently wealthy Colin (Romain Duris) falls in love with the lovely, wide-eyed Chloé (Audrey Tautou), and for a short while they live an especially charmed life, surrounded by witty and attentive friends. The blindingly charismatic Nicolas (The Intouchables’ Omar Sy) is counsel and in many ways caretaker to the daffy pair, while new lovers Chick (Gad Elmaleh) and Alise (Aïssa Maïga) bond over their shared love of the philosopher “Jean-Sol Partre.”

This lovey-dovey stretch is nothing short of enchanting, with Gondry’s signature homemade aesthetic perfectly suited to the totally nutter inventions that are commonplace in this particular world: an overenthusiastic doorbell that has to be squashed like a cockroach, a “pianocktail” that assembles an apéritif as you twinkle the ivories (“you get a nostalgic taste from minor chords”).

The social mores are just as cockamamie, as when a dour priest insists two couples race in miniature cars to the wedding chapel; he’s only marrying one of them today. Surprised at the opportunity, a secondary character jumps at the chance. “We can change the whole narrative, become the heroes!” she beams. 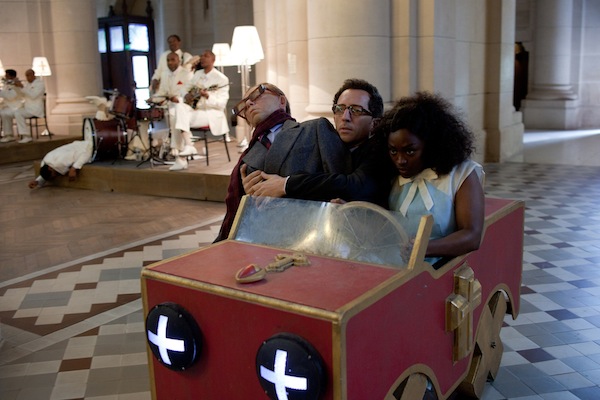 That moment punctures Mood Indigo’s elaborate artifice, to moving effect, in a gentle reminder that every person has a story to tell. (Indeed, that particular character drops out of the film abruptly – perhaps a victim of the 30 minutes that’s been excised from the French edit to the international version that screened at Fantastic Fest?) Disappointingly, Colin and Chloé are the least interesting characters in the movie, given little to do but be tail-waggingly in love. They inspire great affection but less emotional attachment, which undercuts the tragic turn the film will eventually take.

A collaborative spirit dominates this first half – the sunny one, full of wonder and hope – wherein Colin drains his bathtub and in the process waters his downstairs neighbor’s plants, and a celebrity chef talks through the TV to personally coach Nicolas through an eel dish. There’s also the matter of a curious room of assembly-line typists (using mechanical typewriters, bien sûr – there’s no room in Gondry’s loving temple of antiquated technology for something so secular as a power plug). The typists appear to be writing the story of Colin and Chloé, and they experience a kind of contact joy from nearness to the happy lovers. 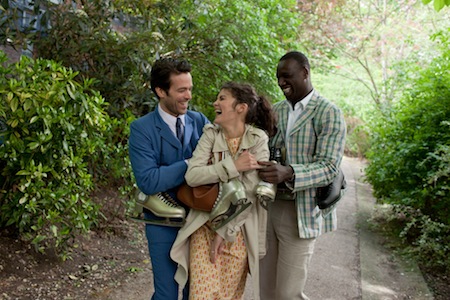 And then it all goes dark, quite literally. As a strange illness takes over, the color is leached from the film stock until finally everything is rendered in blacks and grays. The spirit of togetherness goes out with the light: Colin’s focus tightly narrows to Chloé, Chick’s devotion to Partre becomes all-consuming, and Nicolas begs to help shoulder the sadness. And there is so much sadness. The film’s cut to the credits was a bit of a shock – you’re seriously gonna leave us here? – and it’s hard to imagine any American film getting away with this kind of plummet, from giddiness to slit-your-wrists gloom. That may very well be why Mood Indigo still hasn’t secured a U.S. distributor. I hope somebody with a fat checkbook opens it up soon. As a straightforward narrative with conventional satisfactions, Mood Indigo misses the mark, but as an evoker of so many moods, it’s transportive. 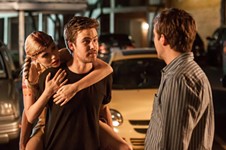