Easily the most tightly packed day of the Fantastic Arcade, day three found the fest hitting its stride. Highlights from the day included a high-energy panel from Vlambeer, a soothing demo of Panoramical, and an off-the-wall science experiment with Kyle Reimergartin. Read on if you're into John Stamos or death or both. 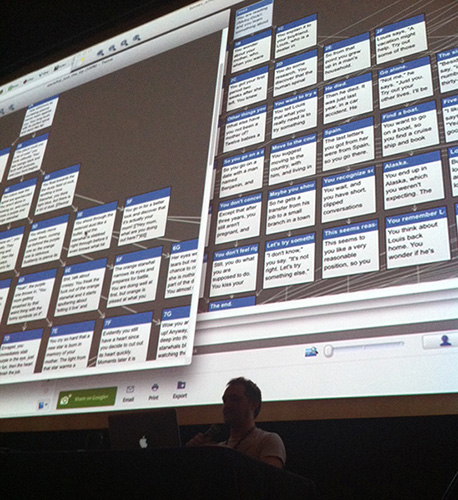 Jerry Belich in front of exploded versions of Choosatron stories

Lesson 1: There needs to be more John Stamos fan fiction

If the Fantastic Arcade advisory board were more uptight, the Choosatron might never have made the cut. Its video game credentials are certainly suspect. The game doesn't even have a video element. Instead the contraption is a choose your own adventure story that gets printed in real time like a really long and engrossing receipt. You too can go home with your very own self-directed story. (Mine is already on the fridge like a grade-school report card.) The creator of the little mechanical/electrical story-makers, Jerry Belich, discussed the many stories being written for his contraptions. One story involved waking up as Full House's own John Stamos. It's like the author reached into my dreams and put my deepest desires on paper.

Lesson 2: Not every panel needs to be a "panel"

Presenting to a packed theatre, Vlambeer – the developers behind Ridiculous Fishing and Super Create Box – did not disappoint. Opening with a demo of their upcoming game Wasteland Kings, Kozilek grabbed his guitar for live accompaniment. From there the game's artist Paul Veer and programmer Jan Willem Nijman proceeded to create a new enemy for the game right before the audience's very eyes (see the Vine above for a time-lapsed drawing lesson). Granted the alligator they created shot bullets out of its butt rather than its gun, the attempt was entertaining and invigorating regardless.

Kyle Reimergartin also evaded expectations with something approaching performance art as he demoed his surreal and almost absurdist game, Fjords. Taking on a persona that was both Mr. Wizard and salesman, Reimergartin seemed to be selling tickets to Science Mountain and his guide to that world, Science Mountain Journal of Life and Science. I left a believer.

The crowd chanted for blood as participants embarked on the last of the daily Spelunky challenges. Their cries were answered (repeatedly) as the highly skilled Spelunkers repeatedly fell to several extremely difficult levels. Even local Spelunky legend Saam Pahlavan couldn't traverse the spider-laden path to victory last night.

Lesson 4: Gone Home is the CSI of video games

Steve Gaynor of the Fullbright Company and local indie Randy Smith of Tiger Style Games kicked off the day with a discussion of environmental storytelling. Fullbright just released Gone Home to critical acclaim even though the game's lack of action and direction left some internet denizens to decry the title a non-game. Games like Spider and Waking Mars from Tiger Style have similarly managed to tell stories in the background as players are engaged in the action on the surface. They aptly called their style "forensic storytelling," and while neither panelist delivered a snappy one-liner while putting on sunglasses before a Who song played, it was still an engrossing conversation.

Lesson 5: Panoramical is the feel-good hit of the Arcade

Amidst the incessant bustle of the Alamo Lakeline lobby is an oasis. The Panoramical arcade cabinet has large earphones and a custom A/V control system set up specially for the Fantastic Arcade. The experience consists of an ambient soundtrack and abstract landscape users control with a series of nobs and sliders. The effect is hypnotic and soothing, a welcome experience after three days of festival action. Panoramical's co-creator, Fernando Ramallo, took the stage to showcase a new set of paired sounds and visuals helping people come down easy from the Vlambeer high they had experienced just prior.

Today is the last day of the Arcade at the Alamo Lakeline, culminating with a Samurai Gunn and VideoHeroeS tournament before the Fantastic Arcade Awards at 6pm. It's all still free and open to the public, so bring the family and your bloodlust.