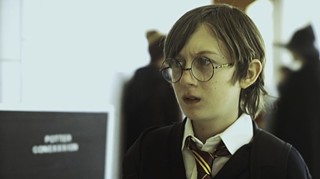 It's called "Slash," referencing the term associated with homoerotic fan fiction involving two popular genre characters doing sexy stuff with/to each other. The "slash" is a placeholder connecting the two people "coupling." It came into vogue (well, micro-vogue) around the cancellation of the Star Trek TV series, when people felt the show's premature demise cut short some opportunities for (unintended?) romance. Everybody needs a happy ending. Even Kirk/Spock. See? There's the slash.

On a more historical scale, fan fiction (and slash) has been around in some form pretty much since the advent of mass publication and popular fiction. Even the Brontë sisters wrote fan fiction about characters they nerded out on as little girls (Google it if you don't believe me). And they turned out alright – mostly. That being said, the primary demographic for modern slash writers tends to be housewives in their mid-40s. This explains E.L. James, and I'm sure we all know by now that 50 Shades of Gray is simply erotic Twilight fan fiction bereft of any copyrighted characters (total sell-out!).

It's important you get up to speed on this stuff before that 50 Shades movie comes out. Because every pseudo-intellectual jerkface at that stupid party you didn't want to go to anyway will be pontificating on the sexual subcurrents and hidden origins of that horrible, horrible book/movie/interactive-area-rug. I read it. I know.

I've been familiar with slash fiction for years. I'd read quite a swath before I began this project – 100% for the sake of mockery and comedy, because it's really funny (particularly when its about stuff like Thomas the Tank Engine).

But when it came to this movie, I decided that I wanted to approach it as an insider: not to deride, but to embrace. (Because, honestly, glass houses.) I went deep down the rabbit hole. I got on the forums. And I came away with a few important lessons:

• I read correspondences between slash writers that was heartbreakingly honest and raw. For so many people, this stuff is the only method they have to express their sexuality to the world.

• Fan fiction is a form of wish fulfillment in itself. It tends to proliferate more with failed TV shows and limited film series – stuff where the story was cut short before it could reach some sort of natural conclusion. The fandom writers are giving themselves the closure the networks or publishing houses robbed them of.

• Consider Star Trek again, which is still a major branch of slash fiction: It was a really progressive show in its day. First interracial kiss. First Soviet/American cooperative work environment. It seems fitting that it should also be home to stories of progressive sexuality.

• But I'm writing in terms of focused, intelligent slash fiction. That said, there are plenty of mouth-breathers in the field too. One creepy thing I discovered in my "research" is that there seems to be an inverse relation between how innocent the source material is to how depraved the sex in the fan stories turns out. Just Google "Thomas the Tank Engine slash" and see what I mean (shortly before you claw your eyes from their sockets).

Fan fiction writers, and especially so the writers of slash fiction, need to be confronted on their own terms. There's a low-fi quality at work here. Something very cobbled together, and in a strange way, dangerous. Dangerous in that sexy way that something can be when you don't quite know where it's coming from or what its intentions are.

And that's the feeling I attempted to capture in my movie. It's the final part of the puzzle regarding my attraction to the subject. I'm a low-budget filmmaker. Many of my efforts have that cobbled-together look and feel. Sometimes that's by necessity, but often it's my intention; it's an aesthetic I genuinely enjoy. It's effortless when its unconscious. And that's slash, right there. When you sanitize something so pure, it becomes safe, and safe we all know equals boring. You will never feel the titillation of the unknown, that tiny tingle of ecstatic fear, when you see a glossy, studio-produced 50 Shades of Gray movie. It will be clean and polished and filled with pretty people who blush appropriately anytime the conversation goes south of the anatomical equator.

It's hard sometimes to see past the ridicule and the derision. But if you can, you might be able to locate that old familiar bell of discovery. You know the one. Go ahead … jingle it.

Clay Liford is an Austin-based filmmaker with two features you can rent online, Earthling and Wuss. His short film "My Mom Smokes Weed" played at a bunch of film festivals including Sundance, so it's probably at least semi-decent. "Slash" is his first movie with any sex toys in it, and he's currently adapting the short into a feature film (albeit without the Harry Potter, because he doesn't like fancy courthouses).