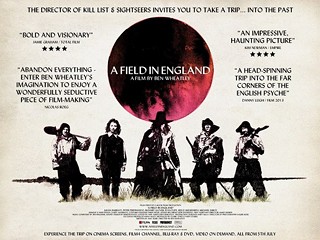 First, credit where credit is duly devious: Brit auteur Ben Wheatley's A Field in England managed the unlikely feat of giving me a minor anxiety attack midway through.

That's probably the very highest praise I can give to the director of previous Fantastic Fest favorites Down Terrace, Kill List, and the Drafthouse Films-produced The ABC's of Death. Think about that, though. When was the last time a film – genre or otherwise – not only metaphorically raised your hackles but also literally spiked your heart rate into the jangly tachycardia zone? That's, well, freaking fantastic.

On the face of it, A Field in England is a seemingly straightforward story about a trio of men trooping off to an ale house in the midst of the English Civil War, and the grimly fiendish nightmare that befalls these damned souls once they encounter Wheatley regular Michael Smiley. But that description pales in comparison with the actual mind-warping surreality that plays out (in gorgeous black-and-white, no less) even during the film's opening moments. Screenwriter Amy Jump and the genuinely visionary cinematic strategies of Wheatley blow your mind out of your unsuspecting skull; a backflashing musket ball couldn't scramble your gray matter any better. (And the results would neither be as sumptuous nor as painterly as Wheatley's infinitely arresting camera eye.)

As in Bastrop, Texas, so too in 1648 Surrey, England. Psilocybin mushrooms are devoured in haste, which offers the characters entre into both heaven and hell, possibly simultaneously. Comedy, chaos, and a veritable smorgasbord of astonishingly beautiful camerawork (by Laurie Rose) and editing (Wheatley and Jump) ensue. But Wheatley affords his audience no simplicity or easy answers even in this most verdant and English of countrysides. Shot in a mere 12 days and released on multiple platforms and British television simultaneously, A Field in England feels like a film both Ingmar Bergman and Ken Russell could drool over. Indeed, Wheatley introduced a screening of the Catholic Church's least favorite movie of all time, Russell's The Devils, as an equally malign-yet-breathtaking precursor to his own film.

There as here, god, politics, and the devil rain down nothing but moldy crumbs for an all-too-starving – or in this case, thirsty – mankind. The lesson? Just one among many: Be careful what you eat, lest it eat you back.