Fantastic Arcade Gets the Closing Party It Deserves

Devolver Digital and Wild Rumpus team up to let loose

Fantastic Fest often feels like little more than a reason to party. Isn't that the reason we love it though? This year the Fantastic Arcade (the gaming arm of the Fantastic Fest) finally gets the party it deserves with a little help from its friends.

Affectionately known as You Guys Like Tequila?, the party is hosted by local promotion and publishing machine Devolver Digital and UK multiplayer-game-party professionals The Wild Rumpus. Together, the two will add gaming antics to the usual music/dancing/drinking equation that usually balances out to a pretty raucous good time.

If you aren't too gamed out from the weekend of Fantastic Arcading, Wild Rumpus is bringing a handful of games to keep people interacting with or without booze. 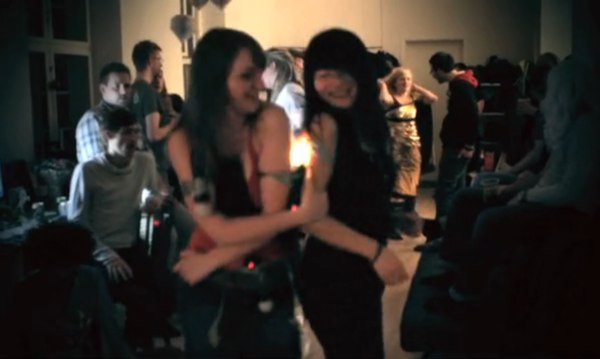 Two players showing their skills at Magnetize Me.

Magnetize Me comes from the Copenhagen Game Collective and involves one player with several motion controllers strapped to various body parts (let's try and keep it clean, people). The other player is outfitted with two magnets of varying color. Music plays, one of the controllers lights up with a color corresponding to a magnet, and the fun begins. The two must connect the appropriate magnet to the controller and dance without losing contact. Rack up points by staying together with the rhythm and with each other until the colors change and/or move. Repeat until you get tired or things get too awkward. This video might make things a little clearer.

If two-player piñata always sounded really fun, but not entirely safe, then here are video games to the rescue yet again. Super Piñata Pro puts players in a virtual, pixelated realm where bats fly to see who can pummel the candy-stuffed creature (and each other) best.

It sounds like a standard game: Rush your ball to a goal and protect your own, but look at video footage from Go Nuts!!, and it's obvious that there's more to it. The name itself probably gives you the most insight into way the game is played. Glitchnap will be putting Vines tagged with #fantasticarcade into the background of the game itself. I've already done about a hundred self-Vines as a way of gearing up for the fest, so expect to see a lot of me.

This one is the wild card of the show. Little is known about Smesport, possibly because the game was named not too long ago. All you really need to know is the man behind the game is Michael Brough, creator of what should be your mobile game obsession, 868-HACK. Prior to that he made Vesper.5 that only allowed players to move once a day. Surely Smesport will be a little more fast-paced.

Additionally, Phil Fish, creator of the magical exploration game Fez, and indie gaming's most polarizing character will be DJing. Also supplying some of the jams for the evening will be local audio-gurus Gl33k and … YOU! Their upcoming release, Cosmic DJ, puts the sounds in your hands via an iPad. Don't worry, there will be a rep from Gl33k on hand to ensure that your beats keep the dance floor crowded.

The event is being held at the Empire Control Room & Garage which boasts a myriad projector setups for maximum video insanity partially provided by Fantastic Arcade head honcho Wiley Wiggins.

All in all it's going to be a feast for the senses. A feast you might not really be hungry for after four days of gaming at the fest, but a few drinks in and you'll be happy you're surrounded by dancing and gaming partners old and new.