Has Fantastic Fest Gone Too Hog-Wild? 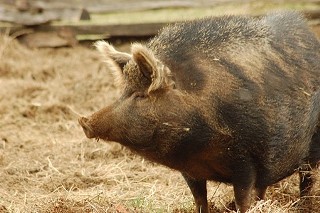 We're of the mind that bacon – and by extension, all pork products – should be a staple food.

Bacon milkshakes? Hell yes. Bacon fondue? Just ladle that nomgasm into our gaping maw while we recline on a white silk chaise longue. Bacon-fu? We're pretty sure in a Shaw Brothers film somewhere. If not, the situation should be rectified posthaste.

That said, the social media brouhaha brewing over a special event slated for this year's Fantastic Fest has some Alamo Drafthouse and FF fanatics crying oink. Specifically, it's the Helicopter Hog Hunt, during which five lucky (and, at $1,400 and change, presumably wealthy) fest attendees will get the chance to cull Texas' notoriously out-of-control feral hog population via helicopter and semi-automatic rifles.

"On Wednesday, September 18th -- the day before Fantastic Fest 2013 officially kicks off -- Tim League's goin' a-huntin'... and you're invited to join.

"… we're gonna arm you with a semi-automatic assault rifles, put you in a helicopter and let you dust all the hogs you can from up on high in an awe-inspiring airborne attack. These aren't stocked farms or ranches, either; these are serious problem pigs that need to get real gone real quick.

"As you can imagine, it ain't cheap to fly around in a whirlybird, shooting guns at pigs, but it sure is a helluva lotta fun, and do you really think you'll ever get the chance to do this again? Plus, the hogs you kill will be the main course at the Fantastic Fest 2013 closing night party! How about THAT for braggin' rights?!"

Indeed. The online blowback commenced immediately after the event's press release/invite hit inboxes, with the major concern, thus far, being the notion of non-professionals killing live animals for sport, and then for dinner. No one's arguing that the state's insanely hungry and invasive feral hog population isn't a major trouble and multi-million-dollar financial disaster for farmers, land owners, and lovers of A.A. Milne books and the film Babe. (You can check out a sampling of the ongoing pro/con discussion here.)

The crux of the matter seems to stem more from the unnerving factor that the helicopter hog hunt somehow blurs the line between the Festival's sense of reel and real. That said, you can bet fans of Russell Mulcahy's 1984 Ozploitation classic Razorback are ecstatic.

I'm not going to take sides here. Tim League is a born showman and the kind of ballyhoo-master not seen since the days of the late, great William Castle. (And hey, PETA, let's not forget the millions of flies that gave up their lives while generating buzz for the Alamo South Lamar's premiere of 2005's Amityville Horror remake.)

As for the eatin' part? I spoke with Geoff Peveto, co-owner of the porcine-themed restaurant Frank, to ask how wild boar stacks up – noms-wise – to farm-bred piggly wiggles.

"Hudson's Meat down on South Congress makes a wild boar sausage that we use at Frank on a pretty regular basis," Peveto says, adding: "It's great. There's nothing wrong with a wild boar as far as it being a legitimate food source. It has a little bit of a twinge of gaminess to it, but it's really good. I think Hudson's sells a smoked jalapeno wild boar sausage on their regular menu."

Stay tuned to all our Fantastic Fest coverage at austinchronicle.com/fantastic-fest.