DVDanger: 'The Lords of Salem'

Or, in defense of Rob Zombie as a filmmaker Who said maternity care was great in Massachusetts? Rob Zombie's The Lords of Salem

I have a serious question: What is it about the fact that Rob Zombie makes horror movies that drives so many people crazy?

Case in point: This week's DVD release of The Lords of Salem. I feel like I have to defend the fact that I like it. Not that I have to put up a defense of the film – that's not my job, that's why Anchor Bay has a PR office – but that I have to explain why I think Zombie should be allowed to make films.

Lords is, like everything Zombie has done, a creative throwback. From his time as head maniac in psycho-sleaze rockers White Zombie and de/refiningtheir retro-rock aesthetic, to his music videos referencing The Cabinet of Dr. Caligari and A Clockwork Orange, through his five live action films (all steeped in vintage cinema lore and gore), and even his Ralph Bakshi animated homage El Superbeasto. At every step of his career, Zombie has shown the roots of his EC-meets-Giallo aesthetic.

And his latest movie does the same. In it his wive/muse Sheri Moon Zombie plays Salem, Mass.-based DJ Heidi, who becomes the subject of an occult conspiracy that began with a curse during the infamous witch trials. Or she's an potentially unreformed junkie whose bad old habits may be wreaking havoc on her sense of reality.

Indie horror is a well spring of creativity and, for me, Zombie is one of its current innovators and unrepentant visionaries: Yet he gets pummeled like no other. If Adam Green pulls together a million dollar budget flick, there's a contingent of film fans that will call it a miracle. And it is, and I like Adam's films a lot, and I am always glad when he's got something new to announce (yes, that means go read my review of Hatchet III.) But, for some bizarre reason, when Zombie does the same thing, suddenly he's the new Uwe Bohl.

OK, so we all know the real reason. He dared to mess with one of the patron saints of horror. He remade Halloween, and then did a sequel. Where the Zombie hatred started: His 2007 Halloween remake

To which I say, oh, please.

One, few franchises have been more mutilated within their own continuity than the further adventures of Michael Myers. The middle arc of the franchise was actually completely ret-conned out of existence by the execrable Halloween H20: 20 Years Later, so lets spread the hate a little more evenly.

Two, Zombie actually had a new idea for the film. The original just goes, "OK, Michael is evil, let's roll with the mayhem." Zombie dares to ask why. That's not the only question he asks. What happened to his parents when they found their kid was a psychopathic killer? How did it affect the family? Where does a movie slasher go when they're not tearing up the neighborhood? Won't their trademark garb get all muddy from hiding in the woods? Love it or hate it, it was at minimum ingenious.

Three, Zombie's version is both subversive and respectful. He rewrites Dr Loomis from Donald Pleasance's haunted medic into Malcolm McDowell's vile glory hound. And if we want to get deep into the mythology, in the sequel Halloween II, Scout Taylor-Compton's version of Laurie Strode (the character that made Jamie Lee Curtis a scream queen) morphs into Jamie Lloyd, the Shape's psychically-connected cousin.

For me, it works. Zombie produced two of the better studio remakes in recent years (it's no The Fly, but it's definitely a step up from The Hitcher.) And then we can talk about his own micro-franchise, the double inferno of House of 1000 Corpses and The Devil's Rejects. His feature debut is a madcap exercise that unapologetically blends together every psycho-sleaze influence on his music and videos, from Munsters go Home to Spider Baby. It's not perfect (having seen the famous Argentinian cut at a festival, there's a good argument for Zombie to go back and re-edit it, but he's repeatedly said he has no plans for a director's cut.) Devil's Rejects may be his masterpiece: A sordid, disturbing evisceration of the American crime spree movie, the anti-Badlands. Blood on the windscreen: Sheri Moon Zombie in The Devil's Rejects

And now we have The Lords of Salem, his long-gestating homage to classic 70s American and Italian supernatural horror. When I talked to Mr and Mrs Zombie back during SXSW, when Lords screened, she explained that it was an 11 year old concept that he has revived and shelved, revived and shelved.

And finally, it emerged earlier this year, and it's gaining a true cult status. Which, frankly, is exactly what it has earned. This is a low-budget flick (smaller even than the studio-indie 1000 Corpses) and Zombie undoubtedly had to cut corners. In fact, if there's one disappointment about this disc, it's that it's so spartan and extras-free. On the commentary track, Zombie says there were longer versions of a swathe of scenes, so why not include them? If you want to know what his original vision was, pick up the novelization he wrote with Halo/Dead Space franchise writer B.K. Evenson. It's clear that Zombie got to write the full story of Satanic molestation for the book, but had to cut his cloth dramatically for the film.

Now let's just stop there a moment. Imagine you write a $5 million to $10 million script, and then you find that you have a fraction of that cash. You have to either dump the project or adapt. A bad film maker just does the same script, but cheap and shoddily. A smart film maker strips the narrative down, rebuilds it, finds leaner, more elegant solutions. And, in Zombie's case, deals with the fact that actor Richard Lynch dropped out due to ill-health midproduction, so he had to completely erase and re-write a major sub-plot.

It's funny, considering how many fans of classic American horror and exploitation flicks hate his films, that he gets to cast so many people who appeared in them. Aside from Haig, Berryman, Wallace Stone et al, Bruce Dern turns up as Salem's resident Dr Loomis, a witchcraft academic who tries to unravel what's happening during Heidi's descent.

This was a set with wet paint, lousy weather, and all kinds of continuity challenges. And yet, what emerges from that grinder production process is a hypnotic and daring shocker, one that doesn't so much captivate you visually but grab you by the eyeballs and shove its disturbing imagery straight into your visual cortex. Zombie crashes back and forth in time, from Heidi's retro-modernity to the fiery purges of the Salem witch trials. Heidi's psyche fractures a little more with each mind-bending excursion, until a final visual assault that abandons low-key reality for high theatrical insanity. 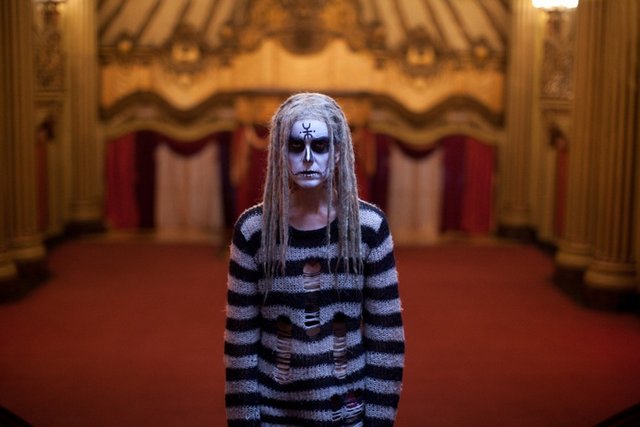 The opera of the occult: Sheri Moon Zombie in The Lords of Salem

It's really Sheri's story, and she's the polar opposite of the swaggering murderous Kewpie Doll Baby in Rejects. As a semi-sober, mentally and emotionally damaged small town rock DJ, Moon Zombie catches the tragedy of her collapse at the hands of lower powers. Zombie puts her through the ringer - rarely graphically, and more through the demonic visions and hallucinations that plague her. It proves that her harrowing depiction of Michael Myers' strung-out stripper mom in Halloween was no one off. She really has the chops for this acting deal.

And that goes for Zombie as a director, who swaps his more lurid instincts for measured shocks. Through his lens, Salem becomes a picture post card image of Autumn leaves and rain-drenched streets, the epitome of New England eerie. Lords is specifically not a period piece, but he catches the nuances of modern 70s nostalgia. Where his earlier films were California Gothic, Lords is shadowed in the dark energy of classic Colonial supernatural horror. It feels like a sibling to The Sentinel and Messiah of Evil (both of which arguably have recognizable hat tips here.) It would make a pretty effective late night triple bill with The Blair Witch Project and another recent Satanic revival, The House of the Devil, and that's high praise in these low places.

The Lords of Salem is out now through Anchor Bay. Catch up with our interviews with Zombie and his stars, Sheri Moon Zombie and Jeff Daniel Phillips.)Next week in DVDanger: Ragnarok comes with The Hammer of the Gods.