The TV show that spoofed cinema, then became a movie, comes home 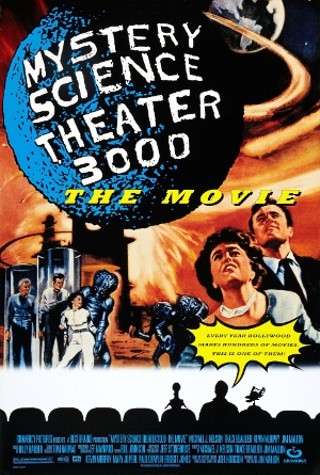 Mystery Science Theater 3000: The Movie: They talk through the film, so you don't have to.

If science and civilization has proven one thing, it's that people shouldn't talk during films. Especially if they're talking over people who are actually being paid to talk over movies. And thus, Mystery Science Theater 3000: The Movie.

For college kids, genre fans and stoners of a certain era, this was one of the truly great timewaster cult shows. A guy is stuck on a space station and forced to watch crappy movies as part of an insane plan by a mad scientist to take over the world. So the token human builds three robots to keep him company and trash these terrible movies: The doting Gypsy, the metaphorically empty-headed Crow T. Robot, and the literally empty-headed Tom Servo.

You have to remember, MST3K was basically doing DVD commentaries before DVD commentaries were a thing. The first show was in 1990, so this was basically just a bunch of guys goofing around over a film. Somehow, it ran for 11 seasons, starting on Minneapolis' KTMA-TV, bouncing through Comedy Central and the Sci Fi Channel.

MST3k: The Movie is arguably an oddity within the show, a low-budget theatrical adaptation of a TV show with a theatrical side business. Considering Shout! Factory is steadily releasing the entire show in four disc box sets (27 and counting), obviously completists will want the movie, and it's not a bad jumping-on point to the series for newcomers. That said, it's not the best, in part because This Island Earth is not the right film for the MSTing process. Evil instigator Dr. Forester calls it "a stink burger" and it's always annoyed fans of the series that This Island Earth is probably the best film that MST:3k every lampooned. Even the cast admit that it's not the best pick. Face it, this is no Manos: the Hands of Fate. In fact, it's arguably a minor classic, a warning letter about the atomic age.

Dr. Cal Meacham (the lantern-jawed and implausibly-named Rex Reason) and Dr. Ruth Adams (future Italian low-budget horror regular Faith Domergue), find themselves briefly caught in the interstellar war between two alien races: The highly cerebral/hydrocephalic Metalunans and the unseen Zagons. Actually, after two acts of science and engineering talk, they finally hitch a ride to Metaluna for 20 minutes of mild peril. Then Metaluna explodes and they go home. It's not Universal's best post-Boris Karloff horror, but the monstrous mutants of Metaluna have become iconic, with their exposed brains and pincer hands.

This release (bizarrely, considering the low-quality of the original film print and the MST3k remix, a Blu-ray/DVD combo pack) includes mix of contemporary and modern extras, mostly explaining why the team made the jump from TV to the big screen. Plus there's a great explanation of how close the team came to making an actual big budget film, rather than just the TV version writ (a little) large(r).

Actually, This Island Earth and MST3K: The Movie have a lot in common. Both were kind of screwed by studio interference (cinema historians will want to watch This Island Earth: 2 1/2 Years in the Making, a splendid making-of doc included here that explain exactly how ill-served director Joseph Newman was in his quest to make a significant, big-budget cerebral sci-fi flick) and both are shorter than they should be. For some unknowable reason, the MSTed version of the film, even with framing scenes and some ridiculous antics on the bridge of the Satellite of Love, is shorter than the original. There's some deleted scenes – or rather, longer versions of what made the final print – that were mysteriously excised, and some low-budget action sequences that hint at the bigger vision that never happened.

It's a strange loop, having MST3K's Muppet Show-level production standards make the transfer to the big screen – and now back to the small screen – with exactly the same sense of dry, snide humor. Of course, some of the jokes are more than a little dated: There's a sequence about killing the Hubble Society, plus Prince gags and a zinger about Patriot Missiles that anchor this clearly in the mid-90s. The extras, especially The Motion Picture Odyssey, suggests that the guys probably ended up regretting getting on board with Universal (Kevin Murphy's fury about having to dump an awesome Bootsy Collins gag is still palpable, 17 years later.)

But yeah, it's still funny. And if you think this kind of yakkity-yak movie comedy began with RiffTrax or Master Pancake, then it's time to set your film abuse history straight.

Mystery Science Theater 3000: The Movie is out now from Shout! Factory. Also available this week:

The Lords of Salem (Anchor Bay) Rob Zombie goes giallo for this throwback supernatural horror (read our review here, plus catch up with our interviews with Zombie and his stars, Sheri Moon Zombie and Jeff Daniel Phillips.)

Now You See Me (Summit) Jesse Eisenberg, Mark Ruffalo and Morgan Freeman all slumming it with a heist flick, this time with added prestidigitation, but it falls short of being Houdini's 11 (read our review here.)

Cockney vs Zombies (Shout!) Like Sharknado, it does exactly what it says on the cover (read our review here, and our interview with director Matthias Hoene and writer James Moran here.)

Evocateur: The Morton Downey Jr Movie (Magnolia) The rise and fall of one of the great/worst controversialists of TV talk shows.

Empire State (Lions Gate) Liam Hemsworth and the Rock flex at each other in this by-the-numbers heist flick.