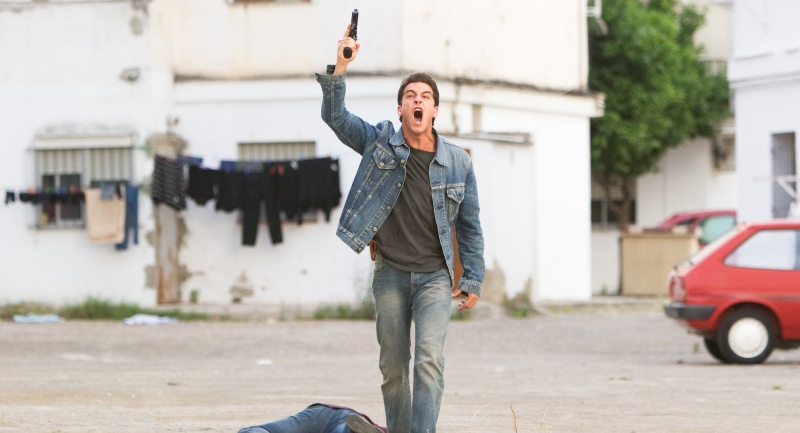 When did police procedurals get so bloated? They used to be models of efficiency. I guess it was Heat that did it, made them bulky and mythical and eternally epic. In some ways, the fact that Spanish corruption drama Unit 7 kicks down the door with such brevity makes it fresh.

OK, let's be clear, I love Heat, and its closest American comrade in blue, LA Confidential. In fact, that Ellroy adaptation deserves serious points for wrangling his multi-year tale of California political and construction history into a manageable movie.

Unit 7 is, in many ways, Seville Confidential, or an Iberian Get Carter or Chinatown. Potentially even Who Framed Roger Rabbit. All of those films are really about what people (and toons) will do to build the city of the future. Here, the unseen driver of events is the drumbeat of modernity. In 1992, Seville hosted the World Expo, a celebration of the best that Spanish culture had to offer the globe. But like the creators of all those stories, screenwriter Rafael Cobos and director Alberto Rodríguez realize that the shiny vision is built on a lot of rubble.

The action starts half a decade before the expo, as construction begins on stadiums, bridges and new tower blocks. The mood is set with swathes of stock footage from the era, as the heavy machinery starts to bulldoze the slums, the abandoned factories, and the unwanted warehouses that just make the place untidy. And, unsurprisingly, there are cops who have been assigned to do exactly the same thing for the unwanted population: The dealer, the junkies, the hookers. Can't have them there when the tourists show up.

The backbone of this offensive are four-man units, and the camera settles on Unit 7, assigned to roust low level dealers. In classic screen detective formula, they'll dangle the odd bad guy off a roof, or throw their clothes in the river, just to make a point. But what if, one day, they change tactics? Maybe some heroin doesn't get handed over to prosecutors. Maybe they start doing a few favors for some junkie snitches. Is it so bad, really, if their arrest record goes up a bit in return?

So far, so The Shield. And if we've seen it all before, why stick around?

Well, because the story of cleaning the streets while getting your hands dirty never gets old. The demolition of old Seville to make way for the Expo will probably ring alarm bells in any city that has demolished everything to make way for a hoped-for future: Like how much of London was redeveloped for the Olympics, or Centennial Park in Atlanta. There's a lot of bad coming down with the good (some in Austin may even make their own internal comparisons to every time the downtown homeless are relocated for a road race or street festival.)

The moral crux of the action is the struggle between fresh faced young cop Angel (Marioa Casas) and tired old street hound Rafael (Antonio de la Torre). Yes, we've seen this equation before, from 1984's French crowd pleaser Les Ripoux through the unforgettable Training Day. But each iteration of that story - of who corrupts who, of where the dirty trail of corruption leads - has a different destination. Unit 7 is no different, and it helps that Casas can flip from callow youth to blazing fury and icy vengeance at the drop of a kepi.

But what really makes Unit 7 an intriguing watch is that it never disappears into narrative histrionics (bar one rather surreal scene involving a bad day for man's best friend.) The corrupt cops gets results, but there's no scene with the chief telling them he'll turn a blind eye to their antics. Instead, their arrest record raises eyebrows and internal affairs interest. Not that they're storming drug fortresses, Bad Boys 2-style: Instead, it's just a few boots to the gut and packets of dope stuck in a suspect's back pocket. It's casual corruption, and intelligently re-sets the calibration on what abuse of power means.

Unit 7 doesn't rewrite the rules. It plays by them with a lot more intelligence and naturalism than most cop films have managed in recent years. Even Rafael's relationship with street-waif-with-a-heart-of-gold Lucia (Lucía Guerrero) dodges the cliches that zip around its head. Even the bad guys aren't overblown. They're mid-level dealers. They know that killing four cops will just bring down the thunder, and so they play a game of harassment and intimidation, rather than some Dr. Doom-esque sinister plan. This is grit and grime writ compact and upsettingly intimate.

Unit 7 is out now on DVD from Kino Lorber. Next week on DVDanger: Retro-horror and a defense of Rob Zombie with The Lords of Salem.