Women on the edge of a supernatural breakdown 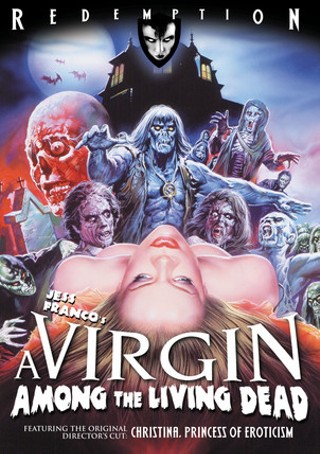 The idea that this comes from the same people responsible, nay culpable, for 2008's alarmingly disappointing Zombie Strippers (seriously, how could they go wrong with a title like that?) is laughable. For that, writer/director Jay Lee seemed a little too in love with hiring his friends and dumping in stunt casting. Here there's only one classic character actor (an almost unrecognizable Tracey Walter as the sleazy landlord.) Instead, he puts two relative unknowns front and center: Jade Dornfeld and Tamara Feldman are Alyce and Carroll, two mid-20s friends who are putting some mostly unspoken falling out behind them. Alyce is an office drone, and it's party pal Carroll who draws her out of her shell. That is, until one pill too many and Alyce realizes that she may have just pushed her best friend off the roof of her apartment. Not surprisingly, the mousy Alyce – who may have had a loose grip on reality before the first frame – starts her own vertiginous collapse into madness. It's not helped when Carroll's ghost starts showing up at the breakfast table. Which is really odd, since Carroll isn't actually dead. Just horribly mutilated by the fall.

This could have been a jumped-up hipster afterschool special, or a bad Greg Araki imitation. Sometimes, Lee undeniably walks too far and strays into pastiche (as with the cartoonesque roid-huffing personal trainer that gets too personal with Alyce). But then he builds up a convincing world of sleaze, personified by Eddie Rouse as Rex, the philosopher-pusher.

But this is really Dornfeld's movie. She doesn't try to make Alyce likable: In fact, from moment one there are subtle alarm bells going off that she is bad news all around. But steers clear of the cliches, and when she finally cracks completely, and starts her own bizarre take on making the world a better place, it all makes sense.

Alyce is a cousin to a personal favorite recent art-gore piece, American Mary. But whereas Mary's decline into butchery has a clinical edge, Alyce is just a creative amateur. More significantly, Mary's downfall and reconstruction is all shown on screen. Alyce comes pre-broken. She feels like a graduate of the European school of derangement (cf Isabelle Adjani in Possession, Catherine DeNeuve in Repulsion, Charlotte Gainsbourg in, well, everything.)

Courtney Love once famously said that Kurt Cobain had Doug Pirner damage. You could say that Dornfeld has Angela Bettis damage – that same kind of perky but broken edginess that made May a cult classic. In Alyce's relationship with Carroll, there's even a degree of sapphic friction that harkens to Bettis' deadly love affair with Misty Mundae in Sick Girl: That Lee makes the sexual tension a key part of Carroll's funeral sequence is a minor and very disturbing miracle. Unfortunately, the cover art for the DVD makes this look like some low-grade generi-horror, when, like Dornfeld's performance, it's so much more.

Proving that you can never judge a film by its clam shell, Zombie Strippers is a much better name for a film than Alyce Kills, but it's vice versa with the quality of the film. It's kind of like the situation with A Virgin Among the Living Dead. It had a bad ass poster. I remember seeing it in the back of video magazines in the Eighties. A plethora of different kinds of ghouls, from Italian-style rotting creepers to a Frazetta-style, medallion-wearing desiccated freak, all portrayed in bloody scarlet and decaying greens: Beneath them, seen in tantalizing curves from above, is a woman, flushed and her back arched. Of course, this has nothing to do with the film, which is a surrealist meditation on crippling grief.

Redemption continues their trawl through the Eurocine archives with this film, which was originally called Night of the Falling Stars but was also lumbered with the lousy title Christina, Princess of Eroticism. It's another emission from the master of the zero-budget erotic horror, Jesse Franco: in part a thinly veiled reworking of Dracula, and in part a meditation on the tragically early death of Franco's muse Soledad Miranda (Video Watchdog editor Tim Lucas makes an interesting argument in his commentary track that the opening shot of a road trip along the Iberian coast is somewhat of a re-creation of her final trip.)

Franco regular Christina Benton is Christina, the titular virgin who sets off from London to rural Spain to see her ailing stepmother before she dies. When she finally arrives at the ancestral home, it becomes pretty obvious that she took a whiff of the same gas they were pumping into the Cabin in the Woods. That's the only reason she doesn't do a runner when she arrives at the family mansion (when has that ever worked out well in a horror?) and found that her kith and kin is Serge Gainsbourg's Addams Family. First sign: If your relatives send a mute servant to collect you from a creepy inn, get on the first train home. Honestly, it would be no surprise if the family physician was called Dr. Acula. Seriously, when you walk in on your cousins licking blood off each other, and your uncle does nothing but play waltzes to your stepmother's corpse, it's definitely time to play the 'oh, my, did I leave the gas on? I must be going' card.

But where Alyce is a protagonist, Christina is a typical Franco passive cypher. Neither path works out well for either of them, but there's a lot of Benton running from one surrealist, bizarro scene to another.

Christina is one of the most infamously mutilated underground favorites, and so Redemption includes two differing cuts: Franco's version, and the more exploitative release with additional material from the producers when they didn't think it was sexy enough. Franco's original 79-minute cut plays with the ambiguity of whether the family is dead, or just dead inside. Of course, that wasn't enough for the producers, who hired his fellow cut-rate visionary Jean Rollin (Night of the Hunted/The Grapes of Death) to bundle together an extra quarter hour of completely unrelated zombie footage.

Armed only with some white face paint and a long wig to disguise the fact that it's clearly not Benton in any of these shots, Rollin at least tried to emulate Franco's style. Ineptly hacked into the narrative, it can be written off as some kind of drama sequence, and probably best so. That said, it does contain the film's most memorable, elegiac image: a torch-bearing hooded goth, a one-woman funeral procession through the family graveyard.

But it's a sadly obvious moment in a film that depends on ambience and mood. That's why Franco's original vision works so much better: It's a long, slow trip to the grave that depends on its pacing. It's the way the ivy-covered valley stands in fetid contrast to the Mediterranean blues of the opening sequence (even if one of the extras does blow straight through the fourth wall with one of the most obvious stares into the camera in cinema history.) It's Christina uncovering the mystery of her own father's death, and exactly why the whole family is so weird.

Working from a print that was seemingly kept in a hobo's bindle for the last couple of decades, Redemption have at least put some serious effort into the extras, as always. Well, all save the hideous English dub. They've even included a five-minute slab of "additional erotic footage" shot by Eurocine producer Pierre Querut (an alarmingly common practice for many such filmmakers, adding in a little bit of extra nudity to entice distributors.) Like the zombies, it has little to do with the rest of the narrative, although it does have the marginal hilarity of one couple who clearly are doing it all wrong. No wonder film historian Alain Petit refers to that happily excised scene as a an open sore on a pretty face.

Arguably the best extra on the disc is the the brief discussion by French cineastes of the three vying versions and the differing roles of Franco, Rollin and Querut. intriguingly the consensus is that Querut shoud have been run out of town on a rail, while Rollin was as much as victim of the system as Franco.

Alyce Kills (Gaiam Vivendi Entertainment) and A Virgin Among the Living Dead (Redemption) are available now. Next week in DVDanger: Call the cops with Unit 7.