Drafthouse chasing chickens for the Italian Stallion next month 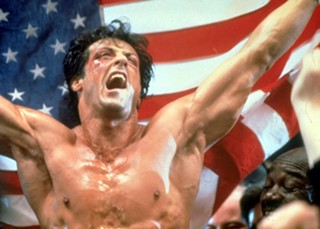 This September, the Alamo Drafthouse will pay tribute to an Oscar-nominated actor and director, whose four decade long career has stretched from 70s social consciousness movies to searing portrayals of aging schlubs. Yes, it's time to praise Sylvester Stallone.

No, they're not kidding. Here's one great reason to remember how under-rated Stallone is. Remember that scene in Rocky, when Rocky Balboa lifts the heavyweight championship of the world above his head? Never happened. That was Rocky II. Spoiler alert: he loses the match in Rocky. Yes, under all the muscle and dumb action cliches, Stallone has offen given his heroes a human, fallible streak. Hey, before Rambo was catching Soviet bullets with his pecs, he was a broken vet reducing to drifting through the backwoods.

It drives Alamo Drafthouse booker/Tough Guy Cinema muscleman Greg MacLennan crazy that the Italian Stallion doesn't get the credit he deserves. "You don't see the marketing for Escape Plan being 'from academy award winner Sylvester Stallone'," he said. So he's planning a five film tribute to the man behind Rocky, Rambo, The Expendables and Stop! Or My Mom Will Shoot.

The plan came up when he was out getting barbecue with one of the bookers for the Alamo's New York expansion. MacLennan recalled his proposal: "You know what we should do while you're here? A big dumb marathon."

As with prior testosterone-fueled tributes to action heroes like Kurt Russell and Jean-Claude Van Damme, the titles will be a surprise until the reels started rolling, although MacLennan does promise one "unrepeatable thing." So don't go in expecting a quick run through the obvious. After all, Stallone has a 40-plus year career to look back on, with everything from broad comedies like Oscar to low-key grim dramas such as Copland and the oft-overlooked Night Hawks, opposite a pre-Blade Runner Rutger Hauer. MacLennan said, "For Russellmania, the first movie was showed was Captain Ron, and then we showed Dreamer wih Dakota Fanning. We're prepared to go weird with people."

As always, MacLennan said, "We have dumb presents to give to people, plus the world's most ridiculous menu items. I get the chefs to throw out their self respect to recreate these childhood dreams." And yes, there will be costumes.

So why Stallone? "Sylvester Stallone's real fucking great," said MacLennan. "You remember Rocky was 40 years ago? And that's still an incredible movie."

OK, not every Stallone movie is an instant classic. In wading through his catalog to select the mystery five flicks, MacLennan found himself "looking at the stylistic choices Sylvester Stallone has made for himself. Like Cobra, wearing a holster and sunglasses while eating a slice of pizza at his desk." Keep an especially keen eye out for "the alarming number of V-necked shirts."

But everyone just remembers the big bang boom movies, and Sylvester has done plenty of those. "It's part of how the industry has treated him," said MacLennan. "Every time he tried to do something different, like Rhinestone, everyone says no, we want more Rocky. So he says, OK, you'll get more Rocky.'" Even when he's been on the ropes, Stallone has always found a way to re-invent himself for a new generation. "He was dead to everyone in the late 90s. … He was gone until he said 'remember me?'" Plus, no-one gets the joke more than Sly. MacLennan said, "He's so self-aware. He wrote Rhinestone and makes himself the buffoon."

But whatever happens, Stallone will always be a master of muscled-up fun. MacLennan said, "There's a reason you can listen to the soundtrack to Rocky or Over The Top while you're down the gym deadlifting 1,000 pounds."

The Alamo Drafthouse presents The Stallone Zone, Alamo Ritz, Sunday Sept. 29, 2pm (and not Aug. 29 as we previously said, Sorry, one haymaker too many to the ol' bread basket.) Tickets available at drafthouse.com.