Gleefully signing up for the Hatchet Army 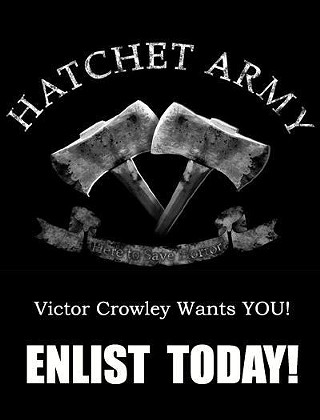 So, if you're planning to read this review of Hatchet III before watching Hatchet and Hatchet II, then here's my advice. Stop, go rent both, and come back. You'll thank me. No, seriously, they're great fun.

OK, while they're away and we're all waiting, just a quick apology for the lack of a DVDanger last weekend. I know, I promised a review of Shout! Factory's stellar The Bruce Lee Legacy Collection, but the release has been pushed back to September 17 due to some disc mislabeling. Don't worry, it's only a delay, it's coming back.

So, anyway, Hatchet III starts exactly where Hatchet II ended. With Marybeth Dunston (Danielle Harris) blasting a massive hole in the face of mass-murdering, swamp-dwelling, blood-and-guts ghost Victor Crowley (Kane Hodder.) Of course, that's not enough to stop the butcher of the bayou and … wait, hang on, I hear something.

OK, so, newbies, back now? See, I told you. The Hatchet flicks are just good old fashioned gore fun. Franchise creator Adam Green came up with this when he was eight, which makes it the Axe Cop of slasher movies.

Do not expect metaphor, subtext, meta-comedy (OK, maybe not too much), deconstructionism, in-jokes and references (OK, there's a lot of that, but in a loving way) or chin-stroking theorizing. This is the polar opposite of the other fascinating contribution to the slasher franchise, 2006's beloved but under-rated Behind the Mask: The Rise of Leslie Vernon. That was a relatively bloodless master thesis on movie murder. This is a deformed monstrous psycho-killer, piled high with prosthetic effects, raining guts and gore on an isolated environment.

Green is, for me, exactly what indie horror auteurs should be. He's flexible, he's versatile, he believes in practical effects (so many rubber entrails, oh so many), he loves what he does, he loves the medium and the mythology, and he's a genuinely nice guy. When he hands out "support unrated horror" badges, it's because he knows what we know: Most studio horror is focus-group-driven bullhooey. In a summer where the mainstream press has been talking about $10 million horrors pulling in $100 million at the box office, he's the standard bearer for the $1 million movie that will gross $10 million in its lifetime. But he's also been busy on his sitcom (really!) Holliston. So this time around he hired his Hatchet/Hatchet 2 cinematographer BJ McDonnell to helm the goregasm. Green wasn't completely AWOL: He still wrote, produced, operated supersoakers full of fake blood, and completes his own mini-character arc as a random passing drunk guy.

It's clear that McDonnell knows the legend and lore, but part threes are always tricky for horror franchises. Friday the 13th Part III arguably manages the triumvirate turmoil best, introducing Jason's iconic hockey mask, but had that hideous old-school 3D schlock factor gimmicking up all over the screen. Halloween III has nothing to do with the other films. I have a soft spot for A Nightmare on Elm Street 3: Dream Warriors (cheesy 80s metal and all) but it's arguably the beginning of Freddy's transition from monster to borscht belt comedian.

It's a tough balance: You have to give the audience more of the same, but not too much more or it's just a re-hash. It's like the third time you make your signature chili: Everyone says, yeah, great, but have you ever thought of using bison instead of beef? Then you change your seasoning mix and they're all like "oh, no, why did you change it?"

Sensibly, Hatchet III has Harris return as the tough-as-nails Marybeth Dunston, the part created for the first film by Tamala Feldman and recast for the first sequel. They could have pulled a National Lampoon's Vacation and gone for a third actress, but if it ain't broke, don't fix it. Of course, that could create problems for Green's threatened supercut of the franchise, but logical consistency isn't necessarily what we're looking for in a Hatchet movie. Green even beats any critics to the punch with a brief excoriation by Sheriff Fowler (Gremlins' Zach Galligan) of every logical inconsistency in the first two films.

Look, we know why we're here. Non-ironic, hilariously gruesome deaths, and a good dose of horror icons. Terry Todd got impressively shredded and skinned at the end of Hatchet II, so don't expect him back as anything other than body bag filling. But we get Harris as the shortest scream queen ever, and it works – there's something oddly lyrical about her dragging a shotgun that's almost taller than her and a squelchy mass of Crowley's scalp into the police station. For Lone Star horror fans, there's a Longhorn along for this latest trip to the bayou: The Texas Chainsaw Massacre 2's Caroline Williams as the snooping reporter who really, truly believes in the Crowley legend. You should also look for a surprise cameo from a Hatchet original. But nothing beats having Sid Haig ramble on as an incoherent, potentially senile, racist swampbilly.

Nothing, that is, except Kane Hodder. That's Green's greatest gift to gore hounds. It seems like Hodder has played every significant iconic slasher except Pumpkinhead, yet he never got to create a killer of his very own. But Crowley – the maimed, mutilated, muscled, hatchet-swinging freak of the Everglades – is all him.

And so to the gore. If Green was paying tribute to classic 80s monster slasher villains like Jason Voerhees and Michael Myers, then McDonnell is throwing some Yoshihiro Nishimura into the blender. It's rare that you'll see this much blood cannon work outside of a Tokyo Gore Police reunion. It's funny, but Crowley isn't the joke. He's the hulking murder machine with a misshapen face. And the ultimate test for any potential viewer: If you wanted to see more of the belt sander from the last installment, then this is the movie for you.

Now, Green. About that supercut …

Hatchet III is available now on DVD, Blu-Ray and unrated Blu-Ray from Dark Sky Films. Next week on DVDanger: Psycho collapse with Alyce Kills, plus some Jess Franco/Jean Rollin hybrid sleaze with A Virgin Among the Living Dead.