News you can use from the local screens scene 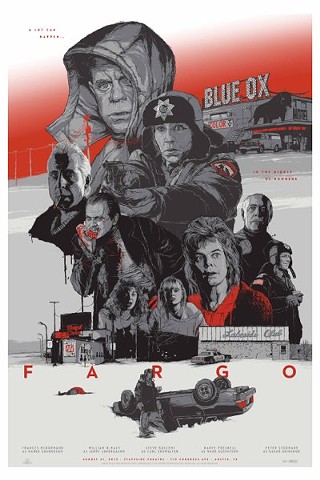 One of Gabz's limited-edition Fargo prints

The Paramount is getting pretty, plus posters, panels, and more.

• The Austin Film Society just announced the three jurors who'll decide what local filmmakers will be on the receiving end of the $116,000 worth of AFS Grants. They are: Jacqueline Lyanga, director of the American Film Institute's annual L.A. film fest; Ry Russo-Young, who most recently co-wrote Nobody Walks with Lena Dunham; and Matt Wolf, the New York-based filmmaker behind Teenage and Wild Combination. Winners will be announced at the end of the month; stay tuned.

• When you think of the Paramount Theatre, what comes to mind? The Houdini hole? The warm glow of the Summer Classics series? The ceiling mural of Saint Cecelia playing a harp ("I see they got my rider," quipped Joanna Newsom)? For most folks, it's the sight that greets them even before then. The Paramount's marquee and the State Theatre blade next door have long been iconic sights on Congress Avenue. But they don't glow quite as brightly as they could. Check out the new fundraiser to help restore the State blade and the Paramount facade to their former glory.

• Speaking of the Stateside, the theatre is hosting a special screening of Joel and Ethan Coen's Fargo on Wednesday, Aug. 21. A Polish artist by the name of Grzegorz Domaradzki (aka Gabz) has worked up a limited edition print for the occasion (see above), and a portion of the proceeds from the sales of the prints will go to the Austin Film Society. There's a limited run of 325 of the above version and 135 in a glow-in-the-dark variant, so don't miss your chance.Visit the Paramount website for tickets and complete details.