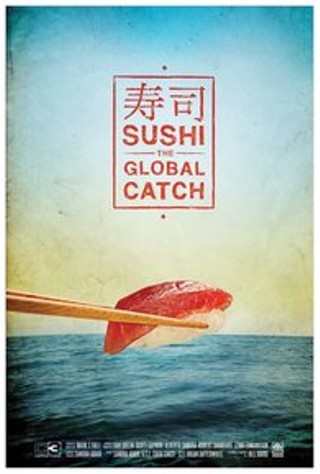 Black-and-white footage contrasts brilliantly with the colorful global interpretations of the fresh-caught superstar of the culinary world. As with many modern industries, overconsumption and a penchant for instant gratification have evolved into a seriously destructive environmental issue.

Sushi begins with a look at craftsmanship versus artistry in restaurants, chefs, and their knives; and then moves backwards to the auction blocks and sales in the famous Tokyo fish market, Tsukiji. The rapidly increasing demand for year-round global access to some of the ocean’s largest predators is quickly endangering the population, or supply. If the Atlantic Bluefun Tuna, or the “Porsche of the ocean,” is wiped out – a distinct possibility if Chinese culture fully embraces the delicacy – the oceanic ecosystem is in major jeopardy.

The big picture: The way the world is wolfing down sushi right now is not sustainable. Scientists estimate the world could run out of fresh wild seafood by 2048. When combined with ecological changes from other environmental issues, this tragedy could occur sooner if intervention is not steady and swift.

The documentary is also peppered with profiles of critically acclaimed restaurants and their masterminds, including Austin’s own Chef Tyson Cole and his beloved Uchi. The breadth of knowledge presented by the many interviewees provide clarity on the facts without ever boring or lecturing the audience. Hall demonstrates fishing practices by comparing the Oma technique of fishing only one tuna at a time vs. the Greenpeace-protested ships that net months' worth of large tuna. The bright filmmaking style presents statistics and factoids woven with glimpses of the sushi industry’s wide-ranging personalities. Bonus trivia: Wasabi originated as a means to kill E. coli bacteria.

Still, this time-honored tradition is not going off the rails on a crazy train just yet (yes, Ozzy). Sustainable sushi bars, such as Tataki in San Francisco, are specializing in responsibly sourced, environmentally friendly seafood. As the originator of the sustainable sushi concept, Tataki approaches the possible solution to overfishing with a blanket approach: Simply never eat endangered fish populations such as Atlantic bluefin tuna. Varying perspectives are threaded throughout the film, and opposing strategies culminate in a heated – and highly entertaining – debate between industry professionals. The alternative to total abstinence from eating the endangered species is aquafarming, an emerging industry making enormous strides off the coast of Australia. Hall uses a moment from 2009 to demonstrate the intensity of the issues with footage of a phone call giving the news of the first successfully swimming farmed tuna larvae. The mission currently continues.

The surprisingly riveting film about all things sushi begins to wrap with lingering questions, and a modest degree of guilt, for sushi lovers. Can I still eat sushi? How? Where? What kinds? The answers are varied, all with compelling arguments, but generally amount to consumer education, a willingness to try other fish, and only eating the delectable dishes in moderation. Sources such as the Seafood Watch Guide are cited, and more ideas are noted on Sushitheglobalcatch.com.