For a lot of us, the appetite for all things Jane Austen never wanes. Crafty, then, that the Alamo Drafthouse is accompanying next week’s free sneak of Austenland with Queen’s eats like finger sandwiches and Earl Grey. 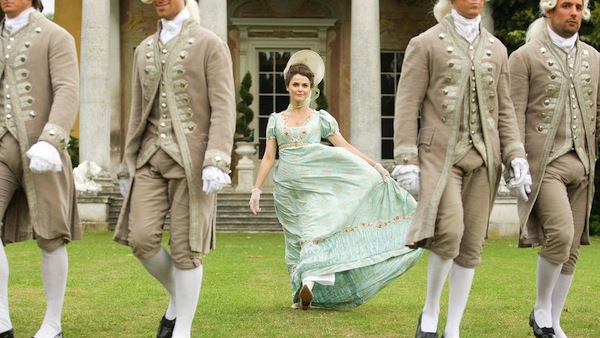 Based on Shannon Hale’s novel and directed by Jerusha Hess (Napoleon Dynamite co-writer and co-producer), Austenland is a romantic comedy about a sad singleton named Jane who blows her savings on a trip to England to an immersive resort that gives tourists a taste of Regency-era life. She’s played by Keri Russell, in a whiplash turnaround from her ass-kicking Soviet sleeper agent on The Americans (girl’s got serious range); also in the cast are JJ Feild – no newcomer to Jane; he previously wore a waistcoat very well indeed in 2007’s Northanger Abbey adaptation) – and Bret McKenzie (Flight of the Conchords).

The film opens nationally on Aug. 16, but the Alamo Drafthouse’s Girlie Night gang is hosting an advance screening on Tuesday, Aug. 13 at the new Alamo Lakeline. To get you in the mood, chef Trish Eichelberger has concocted a special menu offering an arugula, roasted pepper, and goat cheese finger sandwich, a brown butter baked apple with cinnamon-honey whipped cream, and four different kinds of hot tea by the pot – how very English.

The screening’s free, but an RSVP is required.