In a found footage horror movie, the audience is either the hunted or the hunter.

In V/H/S/2, the sequel to 2011 underground horror anthology hit V/H/S, the viewer sees terror from both sides. According to segment director Adam Wingard: “That's the cool thing about found footage. The perspective is part of the story itself.”

Wingard and his long time creative partner Simon Barrett (A Horrible Way to Die), the upcoming You’re Next) are back from the first V/H/S. This time, Wingard directs and stars in the opening story, “Phase 1 Clinical Trials,” while Barrett makes his directorial debut helming the wraparound sections, “Tape 49.” “The moment of realization that we could do a sequel was also the inception for the sequel,” said Barrett. “When people saw V/H/S and responded to what it was doing, we wanted to do it again but taking the lessons that learned from doing that film, doing something better, faster paced, et cetera.”

To extend the collection, they brought in a veritable who’s who of South by Southwest and Fantastic Fest veterans. The duo headed straight to Indonesia for their first pick, lettting Timo Tjahjanto (Macabre) and 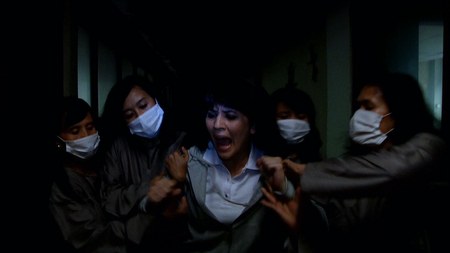 Next on board was Hobo With a Shotgun helmer Jason Eisener, who blasts the audiences with a “Slumber Party Alien Abduction.” This time, it was the much less tropical climes of Columbia, Mo., (where much of the first V/H/S was shot) responsible. Barrett used to book films at the city’s Ragtag Cinema, and became obsessed with Eisener’s hilarious arboreal horror short “Treevenge.” He said, “I showed it every December before everything.” Years later, all three found themselves collaborating on another anthology, the Drafthouse Films production The ABCs of Death. “Jason's short was one of the few that Adam and I got to see before the film was done,” Barrett said. “It really blew us away.”

Completing the shocker quartet, they brought on Eduardo Sánchez (The Blair Witch Project) and Gregg Hale to go for “A Ride in the Park.” While the V/H/S franchise has its share of mordant and bloody dark humor, their first-person tale of a zombie invasion is a real tempo change. It’s laugh-out-loud funny, and Sanchez credits that to his longtime writing partner, Jamie Nash (Seventh Moon, Lovely Molly). He said, “It plays on all your expectations and it delivers. You find yourself giggling, 'Is this going where I want it to go? Oh, yes, it is.'”

Hale was a little surprised by the shortage of undead POV movies. He said, “When Jaimie pitched it and we read the script, we thought 'this is perfect' because it's something that you've thought of but, for some reason, no-one's ever done.” While zombie comedies are getting a little played out, Barrett was immediately sold on the concept because it was fresh. He said, “If there's any creative mission statement off V/H/S 1, it's trying to do things we haven't seen before.” Moreover, at least it wasn’t just another entry into the increasingly crowded zombie canon. Barrett said, “At this juncture, I don't know how you can do a serious zombie thing, unless you're doing World War Z.”

Wingard grinned. “And that was hilarious too.”

V/H/S/2 marks Sanchez’s first real return to the POV/found footage genre since Blair Witch redefined the genre. He said: “It creates its own limitations of what you can do. Once you pick that perspective, you're stuck with it. You can't step out of that. You can't cut to a close-up, just because it hits you out of the scene.”

Eisener agreed. “I remember thinking found footage must be easier to do, but it's honestly the hardest thing I've ever done.” Rather than just throwing actors in front of a camera and letting them riff, it’s a nightmare of organization.

One shot that breaks the firm rules of a POV movie means the illusion is broken. There are workarounds for dealing with coverage and introducing extra cameras but, Eisener said, “You have to pre-cheat with a cheat plan.” 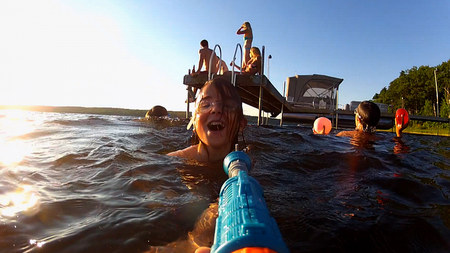 By comparison to V/H/S/2, the original was much smaller and grittier in scale: As Barrett described it, “every segment had the feeling of being a failed sex tape. … The first V/H/S was to feel very authentic, to separate ourselves from what was happening in found footage genre at that time, but at the same time to do something that had an edge to it because we were independent.” But audiences were quickly divided into two camps: One saw it as a slate of bleak and sleazy morality tales, while the other accused the all-male crew of directors of misogyny. That second response caught Barrett off-guard. “We heard people calling it fratty, and it's clearly not,” he said. “If you take any of the segment of V/H/S on their own, it's pretty hard to argue that they're misogynistic, but it’s the experience of them all after each other.”

Wingard added: “All these guys get their comeuppance. People missed the point.” Knowing the political bear trap they had set themselves, he said, “This time, everyone was just coming up with fun little horror movie stories. The V/H/S series isn't about grand statements.”