From the Vaults: 'Spider Baby'

A restored print of 'the maddest movie ever told' screens Sunday Last year, however, the Academy of Motion Picture Arts and Sciences restored Spider Baby and struck a new print, which practically guarantees that this 35-year-old oddity will never fully vanish from public view. That print is showing on Sunday at the Alamo Drafthouse at the Ritz at 7pm. The demented Merrye family is at the center of this "maddest story ever told." They are the last in a generational line who are victims of a congenital disease that causes its victims to mentally regress to "pre-human savagery and cannibalism" as they age. The family chauffeur, played by Lon Chaney Jr. (who also memorably sings the title song) looks after the now-adult children, who live in a creepy, old mansion. Relatives who arrive with intentions of claiming the property for their own meet the revenge of the deranged. A mail carrier, who simply tries to deliver the news (Mantan Moreland) gets his ear chopped off for his effort. Reviewing Spider Baby when it played in Austin during a 1994 release, Marc Savlov described the family as "so off the beaten path they make the Addamses look like the Cleavers." 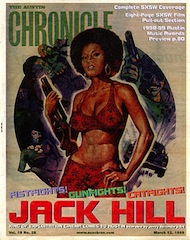 In 1999, Jack Hill and his frequent star Sid Haig (who is brilliant in Spider Baby) attended the South by Southwest Film Festival to present several of his films (among them Swinging Cheerleaders, Switchblade Sisters (which was re-released in the Nineties by Quentin Tarantino's distribution arm, Rolling Thunder), and the blaxpolitation pictures, Foxy Brown and Coffy). 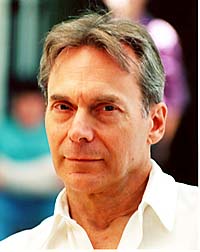 For more on Jack Hill, see "New World Pioneer," a career overview written by Louis Black in conjunction with that retrospective, and "Players, Prisons, Pit Stops, and Girl Gangs," an interview with Hill conducted by Jerry Renshaw.