Plus 'Big Bad Wolves' and 'Nightbreed - The Cabal Cut' and more 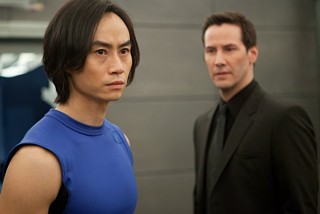 Behind the camera and on to the red carpet: Keanu Reeves bringing 'Man of Tai Chi' to Fantastic Fest (Image courtesy of Radius)

Fantastic Fest has just dropped the first wave of programming for 2013, and it's time to get excited. Keanu Reeves will be walking the red carpet with the US premiere of his directorial debut, Man of Tai Chi.

Like his Bill and Ted costar Alex Winter, Reeves just gets more and more interesting by the year, narrating fascinating documentaries like Sunset Strip and the fabulous film stock obsession story Side by Side. For his first shot as a director, he tells the story of a talented fighter (inspired by his real life friend Tiger Chen) who struggles to get out of the underground fight scene.

Emphasizing the festival's long history of bringing the best brightest and weirdest from around the globe. This year there's not one but two films from India, plus a documentary about narcocorridos, the drug ballads of Mexico. Color us particularly excited by Big Bad Wolves, the follow-up to Rabid by Navot Papushado and Aharon Keshales. Their first feature, which played at Fantastic Fest 2011, was Israel's first ever horror movie, and their sophomore outing is getting killer word on the festival circuit (read our interview with the directing duo here.)

Of course, with Fantastic Fest being one limb of the Alamo Drafthouse space squid, there's a good showing of Drafthouse Films titles. First off, the North American premieres for two acquisitions out of Cannes: German (im)morality play Nothing Bad Can Happen and Danish domestic brain scrambler Borgman. We'll also get the return of SXSW audience award winner Cheap Thrills.

This is only the first of three waves of programming, and Alamo CEO Tim League promises "This first incredible selection of films gives a small taste of the fun, but I can assure you there are lots of surprises yet to come. 2013 should be remembered a vintage year for Fantastic Fest."

Don't forget, we've already got the world premiere of Robert Rodriguez's next bloodbath Machete Kills confirmed as the opening night movie. Now here's what'll be joining it on the FF screens:

Borgman
North American Premiere
D: Alex van Warmerdam, 113 mins, The Netherlands, 2013
Something wicked this way comes in the form of the ordinary, the polite and the normal as a drifter and his followers invade the home of a bourgeois family.

Cheap Thrills
D: E.L. Katz, 85 mins, United States, 2013
A recently fired father facing eviction is paid to take on an escalating series of insane challenges from a rich couple with a twisted sense of humor.

Commando: A One Man Army
US Premiere
D: Dilip Ghosh, 120min, India, 2013
Singing! Dancing! Extreme violence and goofy one-liners from Bollywood's answer to Tony Jaa and Marko Zaror! If Cannon Films were to relocate to India, Commando would be the result!

Eega
Austin Premiere
D: SriSaila Sri Rajamouli, 107 mins, India, 2012
A murdered man reincarnates as a fly to wreak vengeance on the villain who took his life and his lover. Eega is an inventive, insane take on a revenge story unlike anything you've seen before.

Halley
Texas Premiere
D: Sebastian Hofmann, 83 mins, Mexico/The Netherlands, 2013
Though Beto’s life may technically be over, he allows himself to experience it one last time before his body completely falls apart in this unique and contemplative horror film.

Kid's Police
North American Premiere
D: Yuichi Fukuda, 100 mins, Japan, 2013
When evil criminal organization Red Venus strikes, there's only one team of highly specialized cops who can help. Unfortunately, they've been dosed with anti-aging gas that has turned them all into children.

Man of Tai Chi
US Premiere
D: Keanu Reeves, 105 mins, United States, 2013
Keanu Reeves stars in and directs this epic tale about a young martial artist who must compete in an underground fight club to protect his way of life. As the fights intensify so does his will to survive.

Nothing Bad Can Happen
North American Premiere
D: Katrin Gebbe, 110 mins, Germany, 2013
Tore, a member of the counter-culture Christian movement Jesus Freaks, is befriended and taken in by a family who play an increasingly cruel, violent game and push his capacity to love to its limits.

On The Job
US Premiere
D: Erik Matti, 200 min, Philippines, 2013
Corruption abounds in this stylish, Cannes-selected, ripped-from-the-headlines story of prisoners released on a day pass to work as killers. The cops must bring them in, never knowing how far the corruption spreads and who they can trust.

Vic + Flo Saw a Bear
US Premiere
D: Denis Côté, 95 mins, Canada, 2013
An ex-con named Vic and her lover Flo retreat to a sugar shack in a small Quebec town to start anew. Their attempt to live a normal life slowly and disastrously unravels.