Mark Gatiss, Lewis Black, and beyond 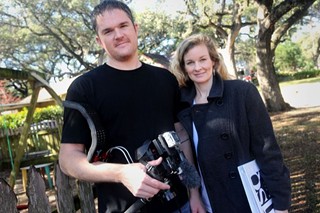 Carl and Betsy Crum with Brazos Film & Video LLC filmed an episode of One Square Mile in Austin in January 2011. (Photo by John Anderson)

These days, it's hard to keep up with all the news. Here are some of the highlights from the TV industry in the past week.

• Comedian Lewis Black let loose on Texas during a clip on the Daily Show this week, and he rounded up a dozen New Yorkers to tell Texas to go fuck itself. We take no issue with some of their complaints, like those against Gov. Goodhair, but really? You're going to brag about late-night food options and the overwhelming smell of urine? I think we'll stick to Paul Qui and bacon, thanks. In case you missed it, catch the full rant at www.nymiddlefingertx.com.

• Entertainment Weekly reported Thursday that Mark Gatiss, best known as the prolific British showrunner behind Doctor Who and BBC's Sherlock, will make his way to another show with a massive fandom soon. He's appearing in the fourth season of HBO's Game of Thrones.

• Emmy nominations dropped this week, with numerous nominations for Downton Abbey, Breaking Bad, and Behind the Candelabra, but the biggest winner so far is House of Cards, which made history as being the first Web show to be nominated for in the prestigious Outstanding Drama Series category. The 65th Emmy Awards air Sunday, Sept. 22, 7pm.

• Speaking of Emmys, remember the series One Square Mile, that took viewers to the titular one square mile in cities across the U.S. to get a nice cross-section of Americana? The creators must've realized that they stumbled upon a gold mine when they filmed in Austin two years ago, because this fall, they return to PBS with an entire series dedicated to the quarter-million-square-mile state we call home. Learn more at www.osmtx.com.

• Wired presents a new animated series called Codefellas, voiced by John Hodgman and Nicole Winters. The series "takes you inside the secretive world of a slightly askew NSA," in perfect timing with the continuing Edward Snowden scandal. But we think the most exciting tidbit about the series is that its trademark Rotoscoping look comes courtesy of Bob Sabiston's Flat Black Films. Check out the first episode below:

The People in Your Neighborhood
America, 'One Square Mile' at a time