A Look at Lakeline

Behind the screens at the newest, biggest Alamo Drafthouse Laying down the law at Lakeline: Alamo Drafthouse CEO Tim League lays out the future of his new Lakeline cinema in front of a custom-cast statue of the Lawgiver from 'Planet of the Apes.' (Photo by Richard Whittaker)

At the new Alamo Drafthouse Lakeline theater, the lobby is covered in Planet of the Apes posters. But ignore the simian antics: Alamo head honcho Tim League insists he's not monkeying around with this new cinema.

Each new Drafthouse has a science fiction theme in the lobby, from alien invaders to carnivorous plants. At the Lakeline site, opening on July 22, the decorations come from the classic ape attack franchise. Some of the posters are vintage French and Italian, some are from the Alamo's Mondo print arm. The centerpiece is a full scale copy of the statue of the Lawgiver from the original Planet of the Apes. The original prop has decayed over the years, but FX guru Greg Nicotera manage to hunt down the original mold and cast a new model. League said, "We're hoping this will be a photo op for fans."

But what's behind the lobby? The 10 screen, 35,900 square foot theater is the biggest Drafthouse to date, seating a maximum of 944 viewers at any time. That also means the biggest staff of any site in the chain, with 255 employees. All 10 screens feature Sony 4K digital projection (the Drafthouse system of choice) while two screens, the 136 seat theater 5 and the 44 seat theater 2, will also feature RealD 3D. Most importantly for fans of celluloid, the 118 seat theater 3 has a proper 35mm changeover projection system. That means two projectors, side by side: As one reel finishes on one, the projectionist must click the other on (yes, like Brad Pitt with the cigarette burns in Fight Club.) League said, "The sad state about 35mm is that it's gone and you can only really get prints from archives at this point. In order to show them, you have to have archival equipment, and you have to be relatively certified to show that you're not going to destroy these rare prints."

League admits that he was very tempted to add the immersive D-Box technology, but backed away when he made a simple realization. "How the hell are you going to hold a beer? We didn't want to redesign our pint glasses to have sippy cups."

Much like the Alamo Drafthouse on Slaughter Lane, this site replaces the old long bench-style tables for food service with shared tables between paired seats. It is also the first Drafthouse in Austin to have the kitchen on the second floor, rather than on the first floor with the screens. Market Concept Chef Trish Eichelberger said should be less intrusive for viewers. She said, "I'm really looking forward to doing special events here, because we have these great server stations that start upstairs and trickle in."

Along with Slaughter Lane, this is really Drafthouse 2.0, and a long way away from the homemade charm of the original Drafthouse on Colorado seat. There was a slapdash appeal that cannot be replicated, like League's handprints on the ceiling paint. "They're probably still there," he said. "I'm not building the theater with my own two hands, but that also means we don't have roof leaks, no electrical shorts." Easy as it is to look back fondly on those days, he said, "If you were a regular at Colorado, you might remember on Friday and Saturday nights you would get salsa music introduced into your movie. So a lot of the innovations are about keeping track of construction technology."

As Alamo Lakeline opens, then the nearby Alamo Lake Creek closes: In fact, if you come North up Research, you'll go straight past the third Alamo location. It's soon to become only the second Drafthouse location to go dark, second only after the original theater on Colorado closed in 2007. The final screening is scheduled for July 21, the day before the grand ribbon cutting up the road. Explaining the move, League said that the old site was originally renovated by himself and project coordinator Daniel Osborne. "Daniel's better than I am," League said, "but anything I'm involved in with my two hands will have to be rebuilt at some point."

Joking aside, the reality is that Lake Creek just didn't fit the needs of the modern Drafthouse. League said, "We were reaching the end of our lease term, and so instead of spending a huge amount of money renovating it to our current standards, it was more cost-effective to start from the ground up and get the spaces that we want."

Of course, it wouldn't be an Alamo without alcohol. Apart from the in-seat service, there will be an on-site bar: Just as Slaughter Lane has its 400 Rabbits tequila lounge, Lakeline has the Glass Half Full Taproom. With a shifting selection of 32 craft beers on tap (overwhelmingly locally brewed) and a selection of 33 canned and bottled beers, there will also be a beercentric cocktail menu featuring such delights as the Hopalong Cassidy (flavored with India Pale Ale syrup) and a Malted Daiquiri. Beers will be grouped by flavor profile, from 'crisp and fresh' to 'weird and wonderful.' To that end, League and his staff plan to eventually put some employees through the Cicerone Certification Program, which is to real ale what the North American Sommelier Association is to wine. League said, "We're hiring a lot of beer nerds. We want people who live, eat, drink, breathe beer, for better and for worse."

The Drafthouse first experimented with bars with the Highball at South Lamar. That was a separate building, although it will be merged with the cinema as part of the ongoing reconstruction. League hopes that, even though it is inside the theater complex, the Glass Half Full will become a neighborhood pub for the Lakeline community, as well as a haven for beer enthusiasts.

Still, the primary role of the site remains providing the Drafthouse experience for the Lake Creek loyalists and the expanding North-West Austin population. League promises that the old site's signature programming, like the Horror Remix series, will stay in the Drafthouse DNA. He said, "This is a replacement for Lake Creek, so anything that's been rooted in Lake Creek will come up here."

Alamo Lakeline, 14028 N. I-183, opens on July 22. More info at www.drafthouse.com/austin/lakeline. For more on the grand opening and the first week of specialty program, read "Alamo Going Ape for Lakeline Opening". 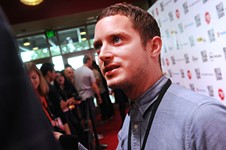