Finding Out What Maisie Knew

"You're watching her in close-up. It's so subtle, what she's doing." Co-director David Siegel on Onata Aprile in "What Maisie Knew" (Image courtesy of Millenium Entertainment)

Along with his long time creative partner Scott McGehee, Siegel creates an updated version of Henry James' tale of battling middle class parents and the child they overlook. Onata Aprile stars as the titular Maisie, six year old daughter of a bickering New York art couple (Steve Coogan and Julianne Moore.) In the original novel, the increasingly abandoned Maisie finds a proxy parent in aging governess Mrs Wix: Here, it's in second spouses, played by True Blood's Alexander Skarsgard and British TV regular Joanna Vanderham. "It's less an adaptation," said Siegel, "than taking a conceit and the structure of the relationships and telling a contemporary story."

As co-directors of five films, starting with 1993's headbending Suture, McGehee and Siegel have become synonymous in their careers. The pair have worked with kids before, in 2005's spelling bee drama Bee Season, but there was a huge divide between Flora Cross playing the 11 year old prodigy Elise, and Aprile as the six year old Maisie, the unblinking but oblivious first grader at the core of What Maisie Knew's examination of contemporary families.

Nancy Doyne and Carole Cartwright's script for this Henry James adaptation had been circling for about 15 years. McGehee said, "Our first response to hearing about it was, "oh, god, we don't want to do another movie with a kid' and two. a divorce and custody scenario seems pretty dire. It seems potentially maudlin to spend a year or two exploring. But we read the script and we had very similar reactions that the script was surprisingly up on its feet. Because it was doing it from a six year old's point of view, it had this elliptical quality to the story telling, and a lightness and an innocence about the whole world of it."

For Siegel, the equation is very simple: "We're telling a story for adults from a six year old's point of view." 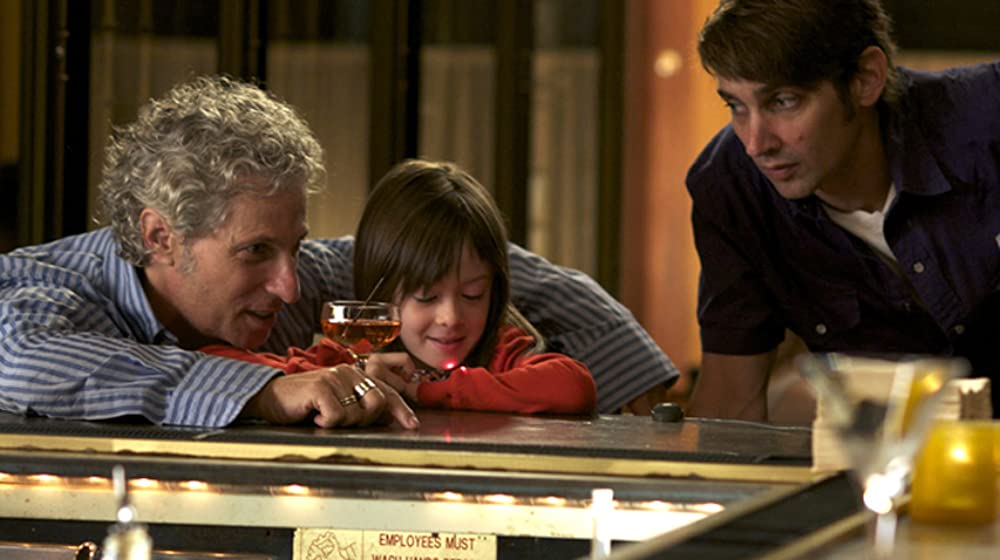 David Siegel (l) and Scott McGehee, (r) on the set of What Maisie Knew with star Onata Aprile (Courtesy of Millennium Entertainment)

Austin Chronicle: What Maisie Knew is basically a POV story, which is incredibly demanding on both the film maker and the actor. Any slip-up becomes obvious to the audience, and can really break the spell.

David Siegel The book is told from Maisie's point of view, and the script is told from Maisie's point of view also, but in reading the script, it's not so strongly that way. Our interest was in telling the story that way, and we were really strict about that. But that just kept changing as we went along, and to a certain degree that came from Onata herself. Her ability to hold the screen and convey story just through her face kept forcing us to reconsider what we needed to tell the story.

Scott McGehee: It certainly isn't something we could have predicted ahead of time. We actually cast Onata dangerously late in the process. Just three or four weeks before we were starting to shoot we finally locked her in, and she just kept surprising us. When you set into a process like this with a six year old, you don't know what to expect at all. Certainly before we met her, and even after we met her, we kept expecting it to get really difficult. For her to not want to do it any more, or for her to lose the kind of innocence that made her work. Any of those things that might have sunk everything. But the opposite was true, every day that we worked with her. The actors had the same experience we did. They kept being surprised by how present she was in the scene, how honest her performance was, how genuinely and beautifully her face worked with the camera. Just the simplicity of her watchfulness.

DS: We've made two movies where the central character had to carry the movie to an important degree through her ability to convey an inner life and interior story through her face. That was Tilda Swinton in The Deep End and Onata. You can hardly imagine two more different individuals. Tilda's extremely cerebral, she's super-good at what she does, which to some degree means she's thought about it and she knows what she possesses. For Onata, it's pure, intuitive naturalism like we've never seen with any actor. I'm not sure if it's apocryphal or not, but there's a famous quote from Picasso where he said, "I could paint like Rafael when I was 12 years old, and I spent the rest of my life trying to paint like a 12 year old."

“We actually cast Onata dangerously late in the process. Just three or four weeks before we were starting to shoot we finally locked her in, and she just kept surprising us.” - David Siegal
AC: There's always extra logistics in working with kids. It would have been a lot easier to make this when James wrote the book, because child labor laws weren't so stringent. 'It's three in the morning. Take 5,008!' Considering Onata is in every scene and just about every shot, how did you work around her needs as a small child?

SM: There were a lot of stairs in the main apartment, and Onata had to go up and down them a lot. We had a lot of takes of her climbing the stairs, and that was the only thing – she didn't complain out loud, but you could see her getting a little hang dog.

DS: Half the shoot was in the Summer, and one September hit we had to school her for three hours a day. It was first grade for her, so we were wondering, well, what is she learning in first grade? The first month of first grade is, where your cubby hole is?

SM: She had that down.

DS: In the Summer, we could have her on the set for eight and a half or nine hours, but she could only work for five or five and a half, but we could split that up.

SM: So we'd build in her breaks when we were setting lights and stuff. We had relatively full, short work days with her throughout the Summer, and that worked out pretty well. There was one day, quite late in our shoot, when we had a very important night scene. It was an out-of-town shoot, it required getting a lot of gear and personnel pretty far from our production base. It was a big emotional scene for Julianne Moore, and she was very prepared for it after a lot of conversations and rehearsals just with her about what that scene would be. We get out there ready to do it, and it came time to do Maisie's shots, and she was fast asleep. She was there the rehearsals and setting up and camera positions, and we're ready, and out walks her mom holding Onata, fast asleep on her shoulder. 'Sorry, guys.' And that was the end of the day.

AC: She's at that difficult age for a film: Too old to just swap one twin baby for another, not quite old enough to be a child actor playing younger. But it's also the perfect age to make the story work.

DS: And you've got to remember, you're watching her in close-up. It's so subtle, what she's doing. There were times that I would be watching her on set, and whether she knows exactly what she's doing, because her great asset was that you gave Onata the scenario and she knew her dialogue, but then she was just brilliant. It was just as if she was in that moment. That subtlety just came so much from her intuitive being.

SM: You talked about an older actor playing younger and we actually thought that we may find an eight or nine year old. I think at nine you get an extra hour in our day. That was a learning experience during casting, because we found really early on that nine year olds are really different. Kids change so much. We'd meet a seven year old and it would be really obvious. We'd ask at the end of the audition, how old are you, and it was always really clear. A seven year old would be seven and a six year old would be six.

DS: Six to seven seems to be this fuzzy but bright demarcation line. An eight year old makes mistakes and they become self-conscious. A six year old would make mistakes and it would seem natural.

What Maisie Knew opens today at the Arbor Cinema at Great Hills. Read our review and find listings here.