Before you see 'Pacific Rim,' expand your monster knowledge 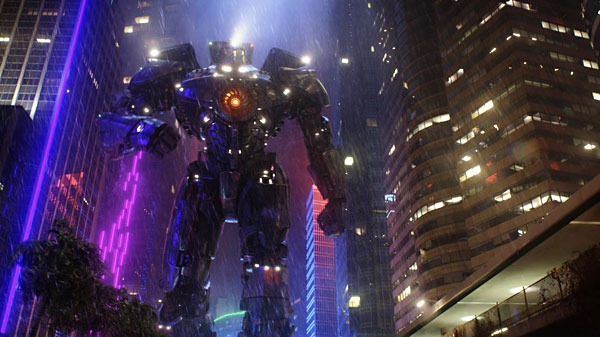 Before the jaeger: Five of the oddest kaiju-inspired adventures of all time (Image from Pacific Rim)

Guillermo del Toro knows it, we know it, everyone knows it: Cinema was invented so one day we could watch giant robots beat the snot out of giant monsters. This weekend, Westernized kaiju Pacific Rim opens, and you can immerse yourself in the history of rubber-suited monsters and cardboard buildings crushed beneath their molded toes.

What is a kaiju film? It's the Japanese-inspired genre of giant-monster-on-a-rampage flicks and, just about now, every writer with a Gamera figure is busy putting together a list of their favorite monster movies. Expect the heavy footsteps of Japanese kaiju creatures to resonate all over them. You can also get a good primer at the ongoing Beasts vs. Bots series at the Alamo Drafthouse.

Me? I'd have to recommend the original Gojira (hold the Raymond Burr, please!), Godzilla vs. King Ghidorah (somehow the idea of the whale lizard being some ancient near-immortal dinosaur protecting his homeland is kind of sweet) and Godzilla vs Biollante (in which the villain is part Godzilla, part small child, and part rose bush. No, it's awesome.) Yes, everyone is going to be namechecking the biggest of the big bad monsters, and the cool kids will try to convince you to watch Neon Genesis Evangelion, and that's all good.

But isn't it time some of the most underrated giant beasts got their chance to romp and stomp like Mechagodzilla crashing through a Best Buy? Here's five of the best, most obscure precursors to Pacific Rim that you might want to catch.

The tragedy of the working Joe Shmo has never been more pointedly or gigantically spelled out than in this glorious 2008 oddity Big Man Japan (aka Dai Nipponjin.) TV comedian Hitoshi Matsumoto wrote, directed and starred in this tale of Dai Sato, a very ordinary Japanese working man who just happens to transform into a shock-headed giant when exposed to elecricity. He's no heroic savior of the day. The giant monsters that he pursues are annoying and a little bit groteseque (imagine the cast of Lars von Trier's The Idiots but 1,000 feet tall.) His job basically involves dealing with their grossness, while frustrated Tokyo residents complain that he's causing a traffic jam. After bizarre CGI-assisted fight sequences, the final rubber suited conflict is a throwback joy (Read our full review here.)

Japan's two greatest art forms may be kaiju and professional wrestling (yesiknowwatercolorsandhaikushutupnow.) So of course it took a bunch of mad bastard Bostonians to merge the two into one of the greatest performance art/combat sports mash-ups ever! Originally conceived as a student project at the School of the Museum of Fine Arts in 1996, almost two decades and innumerable squished cardboard boxes later, Doctor Cube and his minions are still regularly vanquished by American Beetle and his allies. More info at www.kaiju.com. 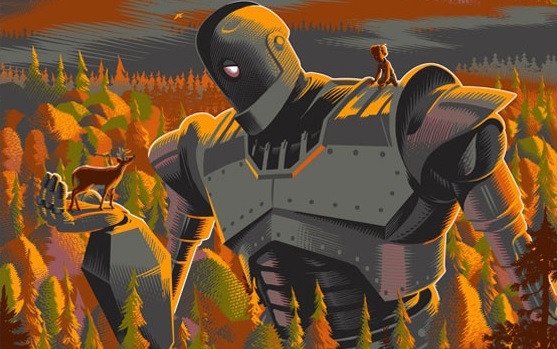 It's a fine line between a giant monster movie and a kaiju flick. Back in 1999, it didn't matter, because this Warner Bros. adaptation of Ted Hughes' British kids classic novella crashed to earth as a lifeless box office hulk. What the dumbass audiences of the time didn't realize was how unbelievably charming and brilliant this "Reds under the bed" reinvention of the ecological metaphor remains. Plus, Vin Diesel as a giant robot. How perfect is that? (Read our review here.)

At heart, all great kaiju movies are about scale, about tiny humans finding themselves at the whim and mercy of gigantic creatures that have little concept they even really exist. British director Gareth Edwards kept that at the heart of his micro-budget indie, as two Americans attempt to survive the Central American jungle as society breaks down in the midst of a slow alien invasion (Read our review here, plus parts one and two of our interview with Edwards.) 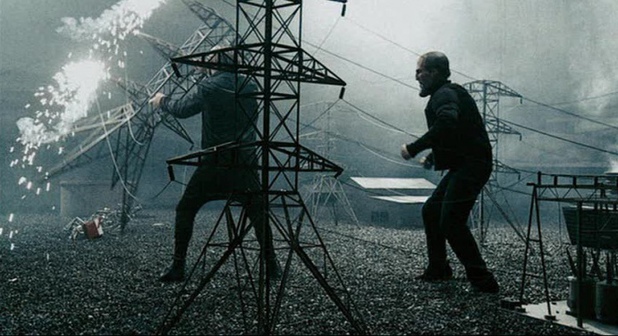 In a film that never seemed obligated to make the slightest lick of sense, British hardman Jason Statham and Art Hsu (The FP) are running through a power plant. Statham gets punched back into some electric cables, and suddenly becomes a thousand foot tall rubber-masked version of himself. There's no good reason, for it, no explanation, and it's never mentioned again. The filmmakers are too busy with the fact that one of their main characters is a head in a jar (Read our review here.) 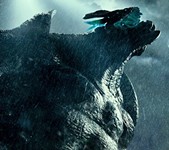