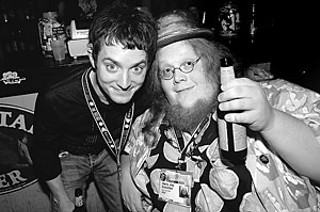 The Austin Film Society's fundraiser is over, plus Bouldin Creek gets a new neighbor and Ron Howard needs your help.

• The Austin Film Society launched a fundraiser in May to build the "best little art house in Texas," and they're pleased to announce they succeeded. Having met their goal of $120,000 in seven weeks from 413 supporters, AFS will set to work sprucing up the Marchesa Hall & Theatre. They're still encouraging donations, however, so don't worry if you didn't contribute but meant to.

• The Daily Mail reports that actor Elijah Wood (The Lord of the Rings, Wilfred) has finally left Hollywood in favor of a home in Austin. Wood has long been seen around town (remember his 2011 Fantastic Fest challenge?), but we're happy to welcome him officially. Plus, his Bouldin Creek digs will put him conveniently close to the Alamo Drafthouse South Lamar when it finally reopens after its long-delayed renovations.

• Ron Howard (yes, that Ron Howard) is seeking short films by filmmakers of all experience levels and backgrounds to premiere at this fall's Project Imaginat10n Film Festival. Those whose work is chosen will join the likes of Jamie Foxx and Eva Longoria, but here's the catch: It has to be a film inspired by a photograph, and you only have until July 23 to submit. Visit www.longliveimagination.com for complete details.