From Gorilla Whales to Men of Metal 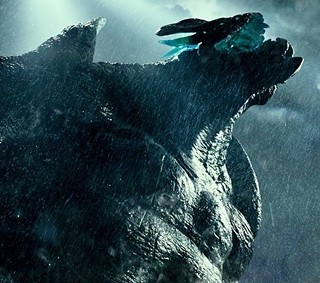 Face it. Giant robots fighting giant monsters are cool in any language and in any era. The Alamo prepared for "Pacific Rim" with Beasts vs. Bots. (Image courtesy of Warner Bros.)

When we first heard that fantasy uber-director Guiellermo del Toro was finally welding together his long-awaited 'monsters versus robots' project Pacific Rim, we were bouncing on the couches making roaring noises like Maguma. Now his love letter to the wondrous Japanese genre of oversized Armageddon arrives on July 12. And if you're going to claim there's a greater moment incoming over our cinematic horizons than a giant robot clubbing a sea-born beast with an ocean-going freighter, it better be Charles Foster Kane duking it out with the obelisk from 2001: A Space Odyssey.

Shocking to no-one, this month the Alamo Drafthouse is unleashing all the beasts in celebration of Pacific Rim with Beasts vs. Bots. This month long monstrous attack features the most enormous creatures to ever threaten human civilization. Of course, there's the grand daddies, like Godzilla and Mothra, but there will also be true rarities, like California-set demon invasion Equinox and the Shaw Brother's bizarre King Kong knock-off, The Mighty Peking Man. And, if you need a sugar boost halfway through this unstoppable creature feature, on July 20 there will be a breakfast cereal party of Japanese monster madness at the Ritz.

Of course, you can't have monsters without the machines to stop them, so expect the sizzle of laser cannons and the stench of oily gears. The rebooted Evangelion franchise gears up with Vol 1.0: You Are (Not) Alone, while there will be not one but two competing models of Fritz Land's groundbreaking 1927 dystoian adventure Metropolis: Georgio Morodor's painstaking 1984 restoration, and the complete cut recovered from an Argentinian vault in 2005. The whole awesome assault wraps up with the greatest American robot movie (no, not Short Circuit) The Iron Giant.

Here's the full list: * means the screening will be in glorious 35mm. Tickets and details at www.drafthouse.com.

July 13
3pm It Came From Beneath the Sea*, Ritz