A New Life for 'A Band Called Death' 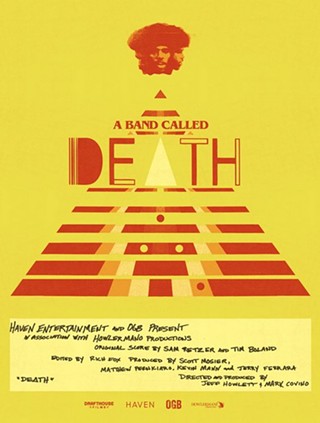 There's a shadow hanging over the Detroit-born proto-punk band Death – but it's also the light that shines on it. Both light and dark came from David Hackney, eldest of the three Hackney brothers who formed the roaring outfit, and the one who never saw its rebirth.

In 1971, three Michigan kids – guitarist David, bassist Bobby, and drummer Dannis – bought some instruments with some cash from their mother's legal settlement after an accident. By the time they finally broke apart in 1977, they had left an unfulfilled legacy. How that misfortune was finally set right three decades later is in the rhythm of A Band Named Death, winner of the 24 Beats per Second award at South by Southwest 2013, released this weekend by Drafthouse Films.

Not that the surviving brothers had left music during that 30-year interim: but they ha left Detroit for Burlington, Vt. Scarcely a rock hotspot, but, like much of their story, that exodus was at the instigation of David. Dannis recalled, "David came and told us, 'OK, guys, we're heading up to New England.' Bob says, 'OK, what did they do to the old one?'"

While the three moved East, Bobby was still pining for Detroit and his wife Tammy. He was going home often to see her and set up a life, he said, "and of course there's Tammy's mother saying, 'You're not dragging my daughter out of here.'" Finally, it fell to the other brothers to bring him back to the fold. He said, "They sent David to Detroit to bring me back to Vermont, so we could complete our musical mission."

In one of the many strange twists of fate around Death, it was actually David who ultimately returned to Detroit post-Death, while Bobby and Dannis became mainstays of the unlikely New England college reggae scene as the band Lambsbread. That's how they first met documentary co-director Jeff Howlett, back in 1989. "Jeff was a musician in a hardcore punk band," explained Bobby. "I organized this show at Johnson, Vermont, which was called the mud bogs. The owner of the land allowed us to have an experimental show, and a bunch of local and regional bands, and Jeff's band was one of them." They became friends: Jeff kept in occasional contact with the brothers, and also with their sons, especially Bobby Jr. When the history of the band started sneaking out in 2007, Bobby Jr. contacted Jeff to tell him that they were trying to resurrect the family's lost inheritance. "Jeff was naturally intrigued, and he just went out and pulled up the whole story."

Howlett had been studying film at college when he first met the Hackneys. When he found out about Death, he reached out to find out if they were interested in telling their story. There had been filmmaker interest before, but the band had said no. Bobby said, "That was at the start of the whole Death discovery, and we're still trying to figure all this stuff out."

When Howlett contacted them, the timing was just better, but they weren't expecting much. Bobby said, "We thought he was talking about a typical MTV or VH1 video, but on a local level." Howlett made sure they were in for a real surprise. Bobby said, "We saw the first pass, just the cinematography, and me and Dannis looked at each other and said, 'Hey, man, this is is something beyond public access television,' and we just let him in."

Howlett delved deep into the strange, sometimes sad, often ecstatic story of the band, from its near-misses with big label fame to its rediscovery, courtesy of obsessive modern final collectors. Bobby said, "He interviewed family members as far as Cleveland and Kentucky, and just became part of the family.

But there's an unfixable tragedy here. David, the oldest brother, the visionary and guitar prodigy of the band, died in 2000. He never saw the band's success, but ask Bobby or Dannis and they'll tell you straight: He foresaw it. Bobby said, "David did not really let go of the whole Death thing in his mind until around maybe the mid-Nineties, when he said, 'OK, we have to move on.'" Towards the end of his life, Bobby said, "He would always talk to us about the Death stuff and being together again. What's really hard for us is that David's physical aspect had declined so much – and me and Dannis have talked about this – even if we did get together with him to play, it wouldn't be the same. It was weird. It was like God had put this divide between us that we couldn't even cross over."

Bobby and Dannis could never replace David as their brother, and it wasn't easy to replace him in the resurrected Death. So they turned to their old friend and Lambsbread guitarist, Bobbie Duncan. In another one of those strange Death twists, when he moved to Burlington from New York, he took a house just down the hill from Bobby. They finally met because their wives became friends: Yes, Bobby's wife Tammy, who didn't want to move to New England in the first place. Duncan said, "Seven years ago, we started playing together, doing reggae, R&B, jazz, just kicking it around, doing what we're doing." That changed when Bobby gave him a CD of the 1974 recording session that became Death's 2009 debut For the Whole World to See. Duncan immediately fell in love with the music, with driving street-stomper "You're a Prisoner" quickly becoming his favorite track. He said, "I couldn't wait to get into it, and thank God we were already playing, so we didn't have to dust our stuff off. We just had to switch gears."

With the decision to make Death into a touring band again came a lot of history, much of it new to Duncan. He said, "I knew about their brother David, but they'd never really talked to me about him in depth, and what his role was in their musical career." The revival brought back both the good times and the sad losses for the Hackney brothers, and Duncan was suddenly part of it all. "It was some big shoes to fill," he admits. "Suddenly, it wasn't just this guitar thing anymore. It was a whole family thing. This was deep."

It may seem like an odd situation: Three musicians that left the big city for rural tranquility, and there they find new fame as unsung forefathers of punk. In the mean time, Bobby was working as a school custodian to put his kids through college, while Duncan was a mechanic. Duncan said, "I was cutting up my hands and Dannis would be saying, 'Man, I can't wait 'til you quit that job.'" It wouldn't be too hard to see the divine forces David talked about behind it all. Duncan said, "What brought me from Harlem to New England? It was just this chain of events, but look at it like this. What takes years for us takes 15 minutes for God."

Even without David present, Howlett knew how important he was to the whole story: Not just the narrative, but the spiritual and artistic underpinnings of the band. It was David who refused to change the name to something more radio friendly, because it was David who understood that Death is not an end. It's a transition. That's all core to Howlett's film. Bobby said, "He became very passionate about David's complete side. The whole spiritual, mental and physical aspect of it. I think that's what makes the documentary what it is."

A Band Called Death opens today at the Alamo Village in Austin and other venues around the U.S., and is available now on demand and online. For more info visit, www.abandcalleddeath.com. Read our review and find listings here.