On talking in all the right places 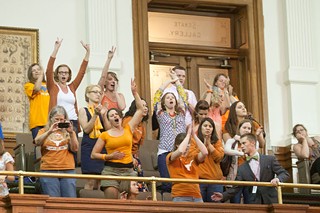 As hundreds of men and women from all over the state shouted at the top of their lungs in the normally decorous Senate gallery, effectively carrying the filibuster football the last two yards into the endzone (to continue the running sports metaphor), my Grinchy heart grew three sizes.

Partially, it grew when I shed just a tiny bit of my cynicism about the functionality of government (for the record: still totally jacked up), but also, my rule-abiding self got a little giddy at the idea of 500 people screaming loudly in a quiet Senate chamber (along with countless others just outside).

And now that Gov. Rick Perry has called for a second special session to revisit the issue (along with the transportation and juvenile offender bills that got forgotten in Tuesday's turmoil), I figure maybe it's worth dissecting why it is that I found it such a joyful noise—particularly because I suspect I'm not the only one. But to do so, I have to step outside the gallery, outside the Capitol, and into the unlikely pairing of our city's movie theatres.

I've always been a rule-abiding kid. As children, my brother and I were praised by antique shop owners for our behavior when we joined our parents on those long, dull trips. In school, I was never once sent to detention. Hell, I even use my turn signals when there are no other cars for miles. It stands to reason that I'd also like my movie theatres silent.

And for the most part, I do. I've been spoiled by the Alamo Drafthouse's "you talk, you text, you get kicked out" policy – so much so that even the involuntary sniffling sounds during Steven Soderbergh's Contagion had me on edge. (Certainly, the subject matter might not have helped; I've never seen so many people so vigorously washing their hands as in the bathroom afterward, which equally delighted this misanthrope.) I'm delighted by almost-empty theatres and those audiences composed entirely of reviewers, and when I saw David Edelstein's essay on Vulture yesterday about the talker/texter plague sweeping New York City, I was immediately a little smug that we Austinites already have what other big cities have been waiting years for: theatre staffs that'll kick you out – and maybe even mock you later – for interrupting the moviegoing experience.

But something happened to me in a theatre recently, and I blame it mostly on Joss Whedon. I started to wonder: Is there such a thing as being too quiet?

I first caught Much Ado About Nothing at a press screening in March. I came out of that virtually silent room generally pleased by the project. But when I came out of an opening night screening last weekend, having enjoyed the film this time with a hundred Austinites not vigorously taking notes for publication, I loved it. The Shakespearean jokes spewing from Nathan Fillion's lips got all the laughs they deserved, and the enthusiasm for this four-century-old play was palpable.

You could tell everybody was passionate about what they were watching, and I felt a warmth for the production that the previous sterile screening couldn't provide. When I missed the occasional line after laughter spilled over from the previous joke, I wasn't straining my ears to catch the last few syllables; I was relaxed in my seat, laughing with the rest of 'em.

To be sure, there wasn't any talking (to my ears), but in such an exuberant audience experience, I'm not even sure it would've bothered me; we were all just a part of a moment together, and it felt good.

I got that same feeling listening to the raucous last 10 minutes of the first special session after 13 hours of gallery silence. I wasn't there in the crowd, but sitting on the couch, hours after my bedtime, I was hooked to the livestream. My heart swelled for my friends in those gallery seats as I buried myself in the live Twitter and Facebook updates. I cheered them on from home, and for the first time in a long time, I understood the power of the voice of the people.

All of this is not to try to compare the Texas Legislature to a Lionsgate movie. Yes, there was certainly a level of spectacle unfolding on the floor before an audience of 200,000 glued to their screens, and sure, Wendy Davis had my heart in my throat more often than a first viewing of Marley & Me. I could even argue I paid a certain price of admission by way of taxes. And hey, we even got our Hollywood ending eventually. (Actually, maybe this analogy works better than I intended it to…)

But something much more consequential is happening at the Capitol, and I wouldn't dream of trivializing that. All I'm saying is that there's a time and a place for letting loose – for laughing, for crying, for gasping in horror – and sometimes the absolute right venue is the one you've been told all your life is the least appropriate place to do so.

So all you yellers in the Senate, loud laughers in the theatres, I want you to know I'm with you. I finally understand the beauty of noise, and I fully intend to join you in being audibly engaged.

Texters in theatres, you're still on watch. But seriously, if you have to stay that wired to your phone, head over to the Capitol July 1. You can bet a couple hundred thousand people want to know exactly what goes down under the Dome next month. Go put your thumbs to good use.