Felicia Day, Defender of the Earth 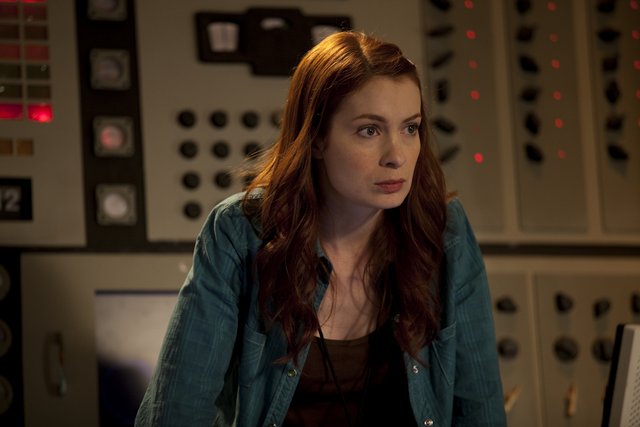 "Some women are considered bitchy if they complain at all. Alison doesn't care." Felicia Day on her role in sci-fi comedy "Rock Jocks."

It's not every day you get to save the world, but tonight at the Alamo Ritz, actress/web comedy pioneer Felicia Day will be blasting the skies clear of menace in indie comedy Rock Jocks.

That is, when she's not scowling or punting her co-workers in the nards. She said, "It's funny and shocking in a way that you can't help but laugh."

Day plays Alison, a member of an elite team charged with using alien technology to shoot down asteroids, meteors, and comets that threaten the planet every day. She almost didn't take the part: She was looking to take a break between her two big Web series, gamer comedy classic The Guild and Dragon Age: Redemption, when her longtime producer/production designer Greg Aronowitz was passed the script by Rock Jocks producer Sheri Bryant. Day said, "The script was so much fun and it was so different from anything I've normally played that I couldn't help but take the role."

If you think that Alison is anything like Day's career-building part as shy gamer Codex in The Guild, prepare to panic. Alison is a control freak. "That's exactly why I wanted to play the part," said Day. "I tend either to play extremely nice people or victims or quirky, very mild-mannered people. There was never one where I got to be deliberately over-the-top."

She's not alone in being the world's worst planet saver. Shiftless shift boss John (Mad TV regular Andrew Bowen) is a burned-out schlub. Their two best gunners (Twilight star Justin Chon, and Kevin Wu of The Amazing Race season 17) are a pair of dysfunctional gamers. Meanwhile, their alien adviser is a nicotine addict who goes by the name of Smoking Jesus, played by the universally loved Doug Jones. "He's amazing," said Day. "I've worked with Doug on three projects, but if you work with him on one day of one project, you'll love him because he is literally one of the nicest people I've ever met."

Jones is famous as the go-to guy to wear full-body makeup (Abe Sapien in Hellboy, the Angel of Death in Hellboy II: The Golden Army, the Pale Man in Pan's Labyrinth, the hallucinogenic version of the French musical icon in Gainsbourg: A Heroic Life, and, yes, the original Mac Tonight). Day first met Jones on the set of Dragon Age: Redemption, where he played horned mage Saarebas. Day said, "Because I felt so guilty that he always gets cast in make-up roles, I wrote a part for him in The Guild season five that was shot just after Rock Jocks."

And then there's long time Judd Apatow collaborator Gerry Bednob (Undeclared, The 40 Year Old Virgin) as the irascible, obscene Tom. "I think he's everyone's favorite character," said Day. "He's so irreverently ridiculous. I was offended on-set several times, but that's the super-fun part about this movie, that it does push the envelope in a ridiculous way." 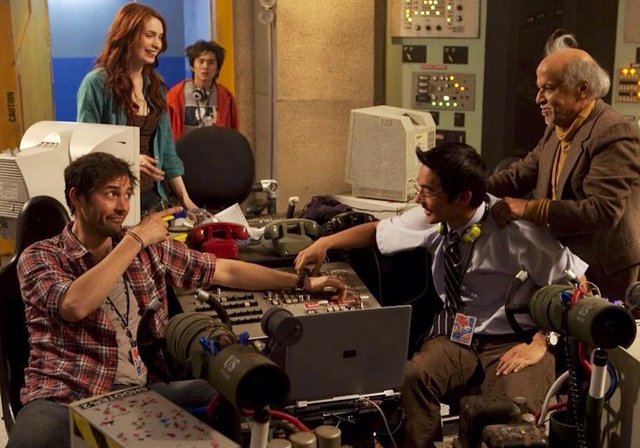 "The fun part of this movie is that it pushes the envelope in ridiculous way." Felicia Day on the sealed room comedy "Rock Jocks"

That almost the entire film is shot in the office/lo-fi intergalactic gunnery range makes it a classic sealed-bottle drama, "but it's such an interesting bottle to be in," said Day. "The pressure of the claustrophobia of the small room brings out their characters very clearly." As far as Day is concerned, director Paul V. Seetachitt turned the perils of a microbudget to his advantage by keeping it intimate. "It was so awesomely done in that way, to bring out the awesome geekiness behind the camera and in front of it, to really bring out the best of all the script has constructed."

While the set may have been fun, Rock Jocks takes some pot shots at the issues of gender in the tech sector and the work environment. As the only woman in the room, Alison adopts the role of martinet. Day said, "I don't know if Alison is justified, judging her from afar, of being so aggressive. But it's one of the understandable coping mechanisms if you're in an environment where you're the only woman. Regardless of what we all want in this world, gender plays a role: Especially in the tech world, where there's such a small percentage of women. In those situations, you have to find a way to fit in, and Alison's is overcompensating. Some women are considered bitchy if they complain at all. Alison doesn't care. She just has a goal, and she uses this way to get it."

Day know a thing or two about hitting her own goals, reaching cult Internet status from The Guild and Dr. Horrible's Sing-Along Blog. But she was not alone on set in having built a joint career as a TV actress and web broadcasting pioneer. Her co-star Wu has established a new outlet for Asian-American comedians a co-creator of youoffendmeyouoffendmyfamily.com. There's also a nod to indie film making with the appearance of Clerks star Jason Mewes as a security guard. For Day, Kevin Smith's micro-micro-micro-budget comedy still stands as the inspiration for an entire DIY movement. She said, "That was the Web series before Web series were made."

Felicia Day presents Rock Jocks at the Alamo Ritz, 7pm and 10pm tonight, June 27. Ticket available via drafthouse.com. The film will also screen at the Alamo Littleton in Colorado (June 30), Alamo Mainstreet in Kansas City, Miss. (July 1) and the SIFF Cinema in Seattle, Wash. (July 5.) For more on the film, visit www.rockjocksthemovie.com. 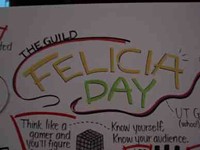