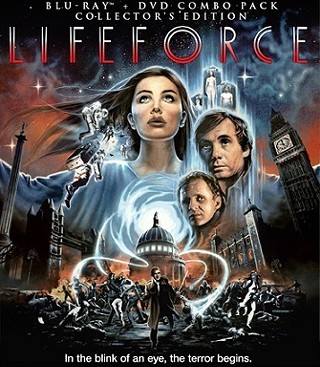 Does a director's cut always make a movie better? When it comes to Tobe Hooper's forgotten 1985 sci-fi/horror oddity Lifeforce, the answer is a profound and definitive "maybe."

Lifeforce (out now on Blu-ray/DVD combo from Scream! Factory) was the movie that was supposed to get Hooper out of his stop-start career Hollywood trajectory and into the a stable routine as a horror director. It's no secret that Hooper had problems after The Texas Chain Saw Massacre: Crocspolitation splendor Eaten Alive and carnival shocker The Funhouse are grindhouse pleasures, while his 1979 TV adaptation of Salem's Lot is still one of the most frightening and successful screen versions of a Stephen King story. But between being walked off the production of two films (Venom and The Dark), and the famously controversial shooting of Poltergeist), he was in a rut. Enter Menahem Golan and Yoram Globus kings of cheap-and-cheerful low budget actioneers through Cannon Films. As Hooper puts it in one of the multiple featurettes on this new edition, they pretty much just threw a copy of Colin Wilson's novel The Space Vampires and a $25 million check at him, and told him to make a movie.

He kept the barest bones (an alien invasion of London by energy-sucking extraterrestrials) and threw out just about everything else. Tacking into the comet-obsessed zeitgeist, a joint US-UK space mission to Haley's Comet finds a massive space ship hidden at its head. Inside are a horde of bat-aliens (last we really see of them, and they're all dead anyway) and the real surprise: Three totally naked human beings in plastic coffins. So, of course, the astronauts drag them back to Earth. A predictably terrible plan, as they suddenly resurrect and start sucking the lifeforce (a weird blue light) out of any passing Terran. At no point do they bother finding clothes, because, hey, when you're turning the population of Earth into dried-out human husks, who has time for clothes shopping, right?

Hooper had actually swapped one undead project for another to do this. He was actually supposed to do Return of the Living Dead, but left that, handing it over to Dan O'Bannon: In return, O'Bannon did a major script overhaul for Hooper. But if you're looking for something like his breakthrough work on Alien, forget it. Lifeforce is much closer to his bizarre and chilling revenant skincrawler Dead & Buried.

In fact, there's a lot of people here that were trying to kickstart a sputtering career. Steve Railsback pops up (literally, at one point), providing the evolutionary missing link between Antony Perkins and Jim Caviezel. His casting as the astronaut psychically linked with the female vampire (Mathilda May) was, as he admits in one of the interviews accompanying the Blu-ray, partly out of desperation. After playing Charlie Manson in Helter Skelter, he'd been pigeonholed as a crazy killer, and even his blank slate turn opposite Peter O'Toole in The Stunt Man had done little to fix that. Then there's John Dykstra handling the special effects shop: An Academy-award winner, sure, but spending all of George Lucas' effects budget on cameras for Star Wars, hitching his wagon to the clunky Battlestar Galactica, and then being a core part of Star Trek: The Slow Motion Picture, wasn't doing him huge favors.

But they were still all pretty bankable properties, and Hooper had clear visions. He wanted to resurrect the lurking terror that was the Hammer Horror trademark: However, he was looking for something far closer to the Lovecraftian science fiction of The Quatermass Xperiment (aka The Creeping Unknown) than its vampire output. What was going to be a mature, intelligent and disturbing mash-up of space terror and psycho-sexual horror instead became famous as a middling oddity with a lot of nudity. I mean, a lot.

Kudos to cinematographer Alan Hume, who somehow shot three of the leads clothes-free without showing excess junk: There's so many odd plants and random pieces of furniture blocking a straight view that it's like a two hour version take of the Austin Powers: The Spy Who Shagged Me opening sequence.

And double kudos to practical effects master Nick Maley's amazing prosthetics. Maley has sort of become a lost name in FX work, having quit the industry the year after Lifeforce to run an art gallery in the Caribbean. No, really. If this exquisitely rendered Blu-ray serves any purpose, it really shows how gorgeously disturbing his work was, and how important he was as an uncredited second unit director. As the alien soul suckers drain their fleshbag feasts, he and his puppetry team used every tool at their disposal to deliver some real WTF moments. Plus, his commentary track wanders away from Hooper's movie into digressions about designing the cantina creatures in Star Wars, carrying Stuart Freeborn's bag, and setting records on the oft-forgotten Krull ("longest makeup job ever" for the Widow of the Web, according to Guinness).

Part of the legend of Lifeforce is that it ended up in two versions: A 116 minute cut that screened, as it was shot, in the UK, and a 101 minute edit, created at the behest of Tri-Star Pictures. Both versions are included here but, in a nod to Hooper's directorial vision, Tri-Stars' hacked-up version is included as an extra. Interestingly, in the commentary track Hooper says he was in the editing booth for both, and suggests that it was simply a time issue: That the US distributors didn't think Americans would sit through a two hour film. Weird logic, but there you go.

The narrative problem with Hooper's original version is that it has four acts, and at least one doesn't fit the with rest. There's a lengthy diversion mid-picture as one alien bodyswaps with an earthling, disappearing into the moors. It's another nod to Hammer, arguably reminiscent of the studio's 1959 version of The Hound of the Baskervilles. Entertaining as it is, it crams in way too much psychobabble in an inexplicable trip to a prison-like mental hospital, run in a blink-and-you'll-miss-it early appearance by Star Trek's Patrick Stewart.

The real downfall of the Hooper version – and I almost hate to say this – is Henry Mancini's completely mismatched score. With a theme dependent on cheerful braying horns, it's a lot more Superman than The Shining. That's definitely one thing the US theatrical cut gets right, bringing in Michael Kamen and Pink Floyd's go-to sound engineer James Guthrie to scale back the grandiosity.

The chop job has more than its share of downfalls. The opening sequence as the shuttle discovers the alien space ship is ineptly hacked to pieces, while British stage icon Frank Finlay is particularly badly served. In Hooper's version, his portrayal of floating expert Dr. Hans Fallada just thinks outside of the box and reaches the right conclusion through unorthodox logic. The studio version makes him a lucky guesser, bordering on bipedal plot device.

The big gain in the longer cut is that there's more focus on Peter Firth and his impeccably non-plused delivery as Caine, the SAS officer with a studiously mean and dry streak ("You don't want to go in there, sir," a squadie warns him: "I know I don't," he quips back.)

In both versions that final act, as the vampiric aliens turn London into a charnel house, is majestic (even if it does throw most of the established rules about this cosmic bloodsuckers out of the window.) Hooper claims that he was trying to make a 70mm Hammer film, and he drains that vein precisely in this final grand, gory act. Maley's practicals and Dykstra's opticals merge perfectly as the interstellar creeps and their infected underlings rip through the streets, decimating and desiccating.