The changing POV of the female revenge flick

Meet the cinematic female revenger: She dices, she slices, she chops and multilates. And in the three decades between martial arts potboiler Ninja III: The Domination and Canadian psycho-surgical creeper American Mary, she has finally started to control her own destiny a little more

American Mary (out Tuesday from Xlerator Media) is the second feature from two rising stars of the Canadian indie horror circuit, Jen and Sylvia Soska, aka the Soska twins. OK, so it may sound a little lazy, but there's more than a dash of their fellow Canadian shock auteur David Cronenberg at play here, with an addition to the canon of new flesh cinema. Mary (Katherine Isabelle) is the lens through which we see their fascination with the world of body modification.

As a surgeon-in-training, she turns to stripping to support her tuition. If that sounds like a cliche, like the old "I'm paying my way through medical school" gag, it's both an homage and an assertion that, yes, that really happens (a few years ago a friend of mine, a concert pianist, was asked whether she would like to be a non-sexual escort for visiting dignitaries at an international political conference. She said no, but admitted she was tempted, because the money was insane.) Anyway, it turns out that her surgical skills are more in demand at the filthy strip joint than her ability to work the pole, you know, gangland violence being what it is, and back rooms of mobbed-up clubs being what they are. But it's when she becomes the go-to underground doc for people seeking irregular plastic surgery – coral grafts, extreme facial reconstruction, voluntary amputations – that her skills get put to more illicit ends. And when medical adventuring becomes a path to revenge, it's a slippery slope from unconventional surgery to medical mutilation.

The Soskas are pretty damn fearless (one of their auditions involved having actors gang rape a chair.) After achieving cult success with the sleazetastic Dead Hooker in a Trunk, the pair became the toast of Fantastic Fest 2013 for this 15 day shoot miracle, built in no small measure on the astonishing use of prosthetics to create characters who are just a little off. Vancouver-based burlesque performer Tristan Risk fuses Betty Boop's curves and Ellen Green's Little Shop of Horrors squeak to create walking, walking Kewpie Doll Beatress Johnson, while seasoned anime voice-over actress Paul Lindberg undertakes some extreme alterations as Ruby Doll, the living Barbie.

But the star of the whole show is Katherine Isabelle, who deservedly picked up a special mention award at FF 2013. She had already linked herself forever with female-centric horror with the lycanthropy-as-puberty horror Ginger Snaps, and American Mary re-enforces that connection. What's obvious is how gloriously gory her performance is, from sewing extra wings on a Christmas turkey (there's a lost scene where she picked up some dead crows for later surgical practice) to her new gruesome career direction. Yet she gives Mary life through the little beats, such as how she half-staggers, half-sashays into her apartment after one of the most traumatic sequences.

There's also her tremendously awkward relationship with Canadian character actor Antonio Cupo as Billy Barker. His journey from gangster fixer to sad puppy dog, while she passes from fastidious medic to fetishistic mutilator, sharpens the whole story to a tragic edge.

The big cinematic influencer here is Hellraiser, which has become a cultural touchstone beyond its box office success. Where Clive Barker's supernatural shocker dealt with body modification metaphorically and euphemistically, in American Mary it's the meat of the story. It mounts an often-disturbing examination of physical resculpting and its sometimes troubled relationship with sense of self. Mary's split role as obsessive, outsider and enabler to the scene doesn't allow audiences to make any simple assumptions or conclusions. The Soskas themselves (appearing as body mod baronesses the Twins) are the personification of that dichotomy, just as Isabelle is the soul of those complications. She makes Mary part Frankenstein, part Christiaan Barnard (the godfather of transplant surgery), and part Mengele. 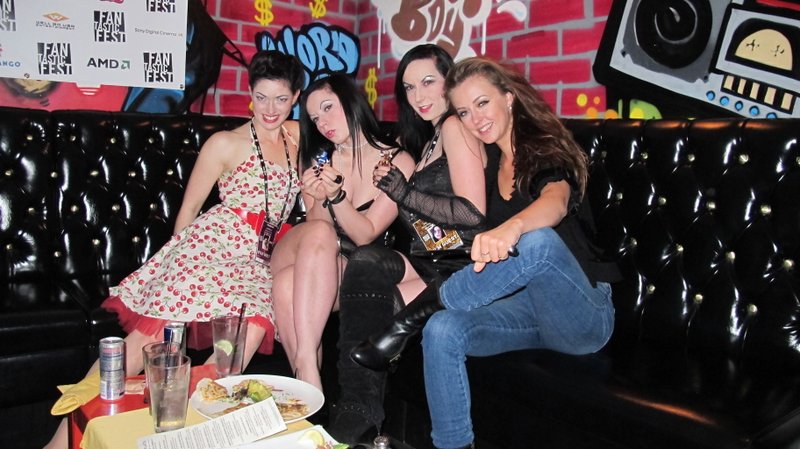 Having had the opportunity to interview the quartet of the Soskas, Risk and Isabelle at Fantastic Fest, that chat still stands as a moment of glorious lunacy in a festival that prides itself on its insanity. The disc can't quite equal that, but it does comes close when they are reunited for the commentary track. Well, mostly reunited, because Isabelle sounds like she's Skyping in. But on a movie that bears repeated rewatchings, the commentary adds both philosophical nuance and a sense of ghoulish fun.

That's a real contrast to everything about 1984's Ninja III: The Domination. Released last week via Shout! Factory, it is one of those oddities that screams out for a revival of I Love the '80s.

You can tell it's the 80s. All the signs are there. Aerobics. Tank-tops. Stock footage of Pan-Am 747s. Brown-lensed shades the size of your face. Supernatural forces in the closet. High cut underwear. Swingers parties in hot tubs. Terrible AOR. And, of course, ninjas. 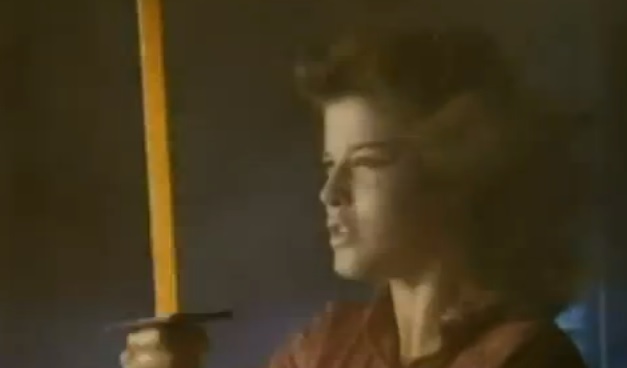 Lucinda Dickey: Getting the hang of this slice-and-dice thing in 'Ninja III: The Domination'

Ninja III: The Domination is almost a kind of/sort of sequel to the actually not very related pairing of Enter the Ninja and Revenge of the Ninja: A series of films linked only by having the word ninja in the title (seriously. It's like a whole franchise of Halloween III: Season of the Witchs.) It starts with the world's most incompetent cops get butchered by a green-clad assasin (David Chung) on a golf course. He's actually after a scientist. Why? Never explained.

Importing the world's least stealthy hitman all the way from Japan just to dispatch one schmuck with a lousy handicap seems like a lot of effort, but this is a Cannon film. Ah, yes, the glorious cinematic reign of Menahem Golan and Yoram Globus, masters of mid-budget mayhem. As hack-for-hire Sam Firstenberg explains in the commentary, they knew how to sell any old pile of garbage internationally: The requisite number of action sequences, a big pay-off fight scene, and just enough near-nudity to keep their target audience of pre-college teens happy.

And plot? Meh. For some nebulous reason, the evil ninja bequeaths his sword to the first person he sees. That happens to be Christie (future Breakin'/Breakin' 2: Electric Bogaloo star Lucinda Dickey: She's an aerobics instructor by night and telephone utility worker by day (well, she's got to pay for that video game console in her efficiency somehow.) The ninja works his beyond-the-grave ninjitsu magic and suddenly she's a blade-wielding murderess, butchering her way through the cops that gunned down the ninja. Well, that finally gunned down the ninja. They were really terrible shots.

The real awkward twist? Even though she's one of the few witnesses to anything that happened, she starts dating one of the cops (Jordan Bennett and his unwaxed hairy shoulders. See, told you it was the '80s.) So not only are these police incredibly incompetent and terrible, terrible shots, they probably need to be run through the handbook on fraternizing with suspects.

As a lesson in sexual politics, Ninja III is fascinating. On the surface, it's a vintage piece of female revenge cinema, and Dickey is absolutely running the show (there's a kind-of-sex-scene with some fabulously gratuitous V8 product placement that is both sleazy and a semi-statement on female sexual empowerment.) But then again, it's not her revenge. And this is where the wheels come right off.

The reason that she is possessed? Well, one, as Firstenberg admits, Poltergeist was making crazy money, and the studio knew how to do ninjas, so possessed ninjas was just money in the bank. Oh, yeah, and as Firstenberg put it, when the studio decided to have a female action protagonist, they also decided they had to make it plausible. Of course, the only way a woman would be capable of displaying mad ninja skills is if she is possessed by a man.

Riiiiiiiiiiiight. Hokay. Let that one sink in for a moment. 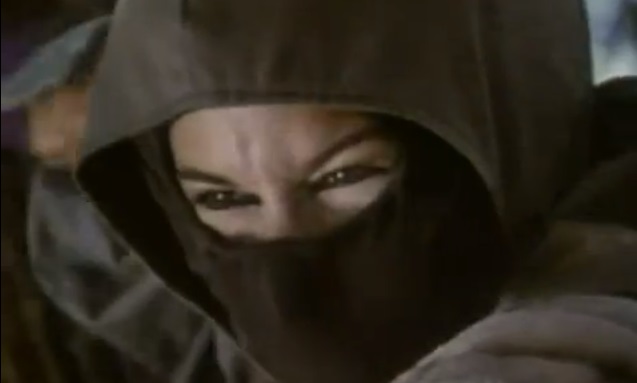 'So audiences won't believe in a female ninja? Oh really?" Lucinda Dickey wreaks her revenge in 'Ninja III: The Domination'

Yes, depressing as that statement is, Ninja III was made six years before Cynthia Rothrock's breakthrough role in China O'Brien (laugh all you want, but that was a pivotal film in American action cinema. Good thing no-one mentioned Meiko Kaji was doing great action films in the 1970s in the Lady Snowblood films: Their heads would explode.)

And, to add insult to injury, not only did Dickey not do most of her own stunts: They didn't even hire a stunt woman to fill her shinobi shozoku. Instead, stunt coordinator Steven Lambert took her place (which explains why she occasionally puts on 15 pounds and gains hairy knuckles.)

In Lambert's defense, he body doubles for everyone. He actually does about 37 times in the opening fight sequence, killing himself in cutaways. He even filled in for the mighty Sho Kosugi. Between Enter the Ninja and Revenge of the Ninja, the mighty Sho really put Cannon on the map, including his performance here as a one-eyed good ninja. So his closing fight with Chung as the unnamed black ninja is inevitably one of the better examples of Occidental ninja sword play. For that alone, the film gets points: Plus there is a splendid cameo by James Hong< as the Oriental mystic who explains the entire supernatural plotline.

But the gender politics explain why a film like American Mary exists. Sure, having a female action lead was a little bit of a breakthrough, but it's pretty superficial. Similarly, while there is a good dose of fetishization of the female form in both, it's a lot more deliberate and far less exploitative in Mary (even when the anti-heroine is performing surgery in lingerie.) And, again, think about the content and the context of the commentary tracks, and what they say about the two films.

Moreover, in Ninja, it doesn't matter how inept and leering the male cops are – they still save the day. In Mary's grand guignol resolution, the haplessly oblivious Det. Dolor (John Emmet Tracy) misses every life saving clue.

And that, dear gore hounds, is progress of some kind.

Ninja III: The Domination is out now through Shout! Factory. American Mary is released June 18 by Xlerator Media. Next week in DVDanger: Alien vampires attack in Lifeforce.