The Alamo Drafthouse Is Seeing Stars 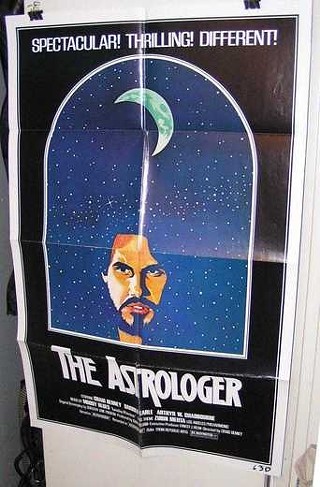 Or at least so says Sam Prime, film programmer and lost cinema historian, formerly of the Alamo Drafthouse and UCLA's Melnitz Movies. What's the story? Is he right?

Denney's feature, a "strange breed of film that could be called an auto-biopic," was feared lost for decades after its release before being recovered by the American Genre Film Archive. Back in the spring, the AGFA hosted an all-night marathon of similarly long-lost films, including this one, which Denney directed and starred in.

Now the Drafthouse is bringing it back – albeit at a similarly ungodly hour – for a standalone showing so you too can help give this feature a second life. And considering its plot spans from sideshow cons to Kenyan diamond smuggling and focuses on the life of a psychic, egotistical asshole, indeed, it's probably safe to say it truly is like nothing you've ever seen before.

Or at least, more importantly, there won't be a chance like this again soon.

The Astrologer screens the night of Saturday, June 15, at 12:45am (that is, just after midnight the morning of Sunday, June 16). Visit the Drafthouse website for complete details and ticketing information. N.B.: There will not be full menu service for this screening, but the bars will be open for drink orders.