From the Vaults: Myth-ing in 'Action'

Saluting Superman on his last big birthday – 25 years ago 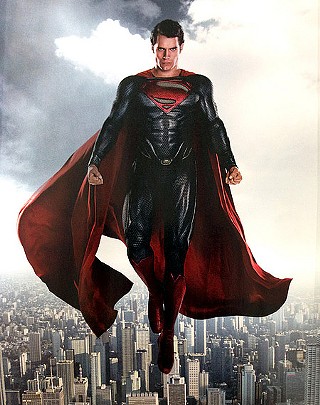 With Krypton's last son returning to the screen amidst a big 75th birthday shindig, here's a past tribute to Superman.

"Myth-ing in 'Action': A Toast to Superman on His 50th Birthday" was originally published in the Chronicle April 8, 1988, and though I've penned hundreds of pieces for this publication since then, this essay remains one of my all-time favorites – in part because it's one of my most personal. Since it predates our online archive start date, it's reproduced here in its entirety. Of historical note, though this was written after the character's 1986 reboot in the comics and the series of films starring Christopher Reeve, in the period since Superman has been rebooted again twice in the comics and on film, has been featured in three different live-action TV series, two animated series, several animated films, and a couple of different revivals of the Broadway musical It's a Bird, It's a Plane, It's Superman, and his shield logo has seen countless variations on T-shirts. He is better-known than ever:

Raise your glasses, please, to a modern myth: Superman is 50.

That's right, the Man of Tomorrow, the Man of Steel, the strange visitor from another planet with powers and abilities far beyond those of mortal men, has hit the half-century mark.

It hardly seems possible, but it's been 50 years since we, the world, first saw him there on the cover of Action Comics #1, boldly sporting his circus strongman's tights, his fire-engine red cape, and that proud, blazing "S" on his chest, and even *more* boldly holding a full-size auto over his head and dashing it into scrap metal against a nearby boulder. He might have been just a garishly costumed 20th-century Samson, but somehow we knew instantly what he represented and why we needed him. He was a man – an alien, yes, but still a man – whose power made him more than a match for the machinery of our technological age.

Superman was a product of his times, just as many of America's earlier legends – Paul Bunyan, Pecos Bill, Mike Fink, and the like – had been. As they had been created to meet the challenge of the frontier, to show that man could tame the wilderness, so Superman was created to meet the challenge of an automated age, to prove that human qualities could triumph over the machine's. Nowhere was this made more clear than in the classic opening to the Man of Steel's radio series, which described our hero in purely technological terms: "Faster than a speeding bullet … more powerful than a locomotive … able to leap tall buildings in a single bound."

Of course, Superman's survival for five decades isn't solely due to his status as our savior from mechanical menace. His story has a resonance that touches us as the ancient myths do. Superman is the archetypal Stranger, the orphan, last son of a noble race, exile from a land to which he cannot return, the hero whose stand in the face of doom saves a race not his own, Oedipus before the Sphinx. He must disguise his true nature before the world, losing in the process the affection of the only woman he truly loves. His dedication to a higher purpose – remember Truth, Justice, and the American Way? – continually overrides his personal desires and keeps him from those to whom he is closest. And for Americans, he embodies elements of our national myth: He is the ultimate immigrant and a dedicated defender of the rights of all. Whether or not these elements of his tale were intended to reverberate through our should when two Cleveland high schoolers added them to the story that became Superman, they do echo the themes of alienation, sacrifice, and unrequited love that have moved us throughout the history of Western literature and art.

Perhaps you think I claim too much for what is, after all, a mere fantasy figure, a comic-book man. Well, then, I ask your indulgence for a man who can still vividly recall the boyhood Christmas which brought him his own Superman costume and the eagerness with which he donned it and literally – to his five-year-old mind, at least – flew out the front door to be the Guardian and Protector of his neighborhood. I remember well the feelings that Superman inspired in the young me: He gave my life the power and drama that I felt it lacked. I wanted to be able to stand tall and resolute and powerful against all those adults who lorded it over me; to stand apart from the other kids, the crowd in which it was so easy to be lost; to experience adventures that would explode the life of drudgery and limitations that kids so often see their lives as.

Through Superman, I could.

And, I confess, I still do. Over the years, I've never lost my affection for the Man of Tomorrow and his exploits. I still delightedly decor his adventures every month in the comics, still picture myself in his union suit, saving the world. I get up early on Saturday to catch reruns of the TV series. I count among my favorite dream experiences the time I was him, flying, the fire-engine red cape trailing me in the wind.

But adventure is not all Superman means to me now; I've come to appreciate other aspects of his legend. I smile at the complexity in his maintenance of a double identity, thinking of the ways I show people different faces. I wince knowingly when Clark Kent must play the fool, , recalling the many times I've been weak when I wished I could be strong. I know the pain of scorn from one you want to give you only respect and admiration and love. All these are now wrapped up in my lifelong friendship with this hero.

And one other. It's an area in which this Man of Steel symbolizes something of greater importance than everything else, a yearning that could not have been easily expressed in childhood. It involves his sense of duty and devotion to that which is right and fair. He is the force for good I wish I could be – that I dream I would be if only I had his power – the agent for all that is fine and true I'd be, were I not bound by the weaknesses of this flesh and my own inconstant spirit.

It may seem odd to some that I link this measure of my soul to a comic-book figure, but childhood icons wield unreasonable influences over us all, and besides, I truly believe in the mythic pull of this character. It is the secret to his longevity and appeal throughout the world. He is, like the greatest of our imaginary saints, our best dream of ourself, a hero of great heart uncompromised.

A toast then to this 50-year-old dream, and to the kids who breathed life into it, Jerry Siegel and Joe Shuster, and to all who've chronicled his exploits since.

May his example fly before us for many, many years to come. 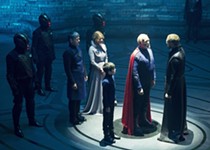 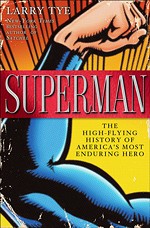