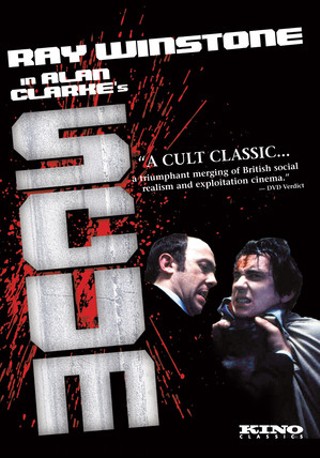 "The only thing you are is a number, boy. Four digits. Name and number."

Welcome to the hideous, brutalizing world of British borstals. The UK's version of juvie, they were the worst of the worst. Imagine the lionized private school, were the best and brightest youth were sent to learn to lead the empire (and if you've ever seen Lindsay Anderson's If …, you know how well that ends.) So take away the children of privilege, and replace them with working class kids, the roughest, the toughest, the wiliest, the meanest, the dumbest, the abandoned, the most discriminated against, those society has no idea to handle. That's the world of Scum (now on DVD from Kino Lorber,) When natural predator Carlin (a 22 year old Ray Winstone playing a fraction of age) is dropped into the shark tank, he's going down swinging.

Even though the protagonists are all under 18, Scum is really the model for all future realistic prison movies (and its final room-wrecking riot makes If …'s machine gun massacre look like a dream sequence.) This is social realism packing a smuggled shank. It's all subtle show and no tell, like the disproportionate number of black kids, or how many of these students are married, heading there, or even widowed. It's hard to tell who's the biggest menace: The tired, hate-filled guards or the bullies to whom they turn a blind eye. And no matter how bad the beating, or who was responsible, every boy just slipped on concrete. That's the lie told to the outside world.

Director Alan Clarke wasn't directing an exploitation movie. He was actually making a respectable piece of drama, just one that dealt with the spectacularly awful casual racism, homophobia and brutality of 1970s Britain. Scum was originally intended to be part of the BBC's Play for Today strand. That was the place for up-and-coming socially minded writers to cut their headline-gnashing teeth, people like Clarke and Ken Loach and middle class Ken Loach wannabe Mike Leigh.

But he made something that scared the establishment, because it doesn't gloss over how the justice system was more criminal than the inmates. Classic sitcom Porridge (a must see piece of TV for a decade) used humor to make the same points about prison, but Scum hammered it home. As Winstone so proudly puts it in the unmissable commentary track, "If it did stop one kid going in there, then it's something to be proud of."

It took a while for any impact. Scum was one of two dramas deemed too racy and shocking for the Beeb, the other being Dennis Potter's 1976 religious drama Brimstone and Treacle. In classic British fashion, Potter and Clarke gave two fingers to the Beeb and adapted their rejected outings as films. So what we have here is the 1979 film version, not the 1977 censored teleplay.

But Clarke didn't throw every baby out with the bath water. Out of the original cast he kept Winstone as Carlin, the hero of sorts. Well, as close as you can get in what's basically a brutal hell hole. Carlin's holding his baby-faced breath, surrounded by the brutality inflicted by his fellow inmates and the screws, until he finally snaps. What makes that moment so terrifying is that he has a sense of justice and honor. When he pummels his way to the top of the heap and snarls through his teeth, "I'm the daddy now," he's the best of the worst.

Every gangster character Winstone ever played, every thug he embodied, is born from that moment. Carlin could become the vile Dad of The War Zone or the cold, calm Mr French in The Departed. Hell's teeth, he could even be redeemed enough to shape up, sign up and apply muscle for good as Jack Reagan in the sadly under-seen film adaptation of The Sweeney ("Shut it!"). Carlin is any and all of them.

That's why Clarke was able to reshape British cinema. He knew what moral ambiguity was.

He also knew talent, since Winstone is not alone as a British screen icon locked up here. In fact, Clarke was a casting genius. Three years later he'd give Tim Roth his breakout role as Trevor the skinead in another razor-slicing dissection of Britain's most dangerous, Made in England. Quadrophenia fans will spot Phil Daniels as the weaselly sidekick, switching allegiances as the tides turn. Frankly, British cinema would have been a very different place without Clarke, who saw Roth and Daniels and Winstone and Gary Oldman.

The legend of Scum is built around Winstone's bone-breaking brutality, but Clarke, a didactic film maker at heart, gives him a cerebral counterpoint. The standout performance from Mick Ford as the filthy-footed and quick-witted Archer, so smart he'll cut himself, one of what he calls the "good, fine minds thrown in with crazy, perverted people." People may remember Carlin leveling enemies with billiard balls in a sock, but few scenes have the power of Archer's exchange with classic British character actor/bloodhound imitator Bill Dean as jaundiced screw Duke. It sums up Michel Foucault's seminal treatise on power, Discipline and Punish, over a cup of coffee. Chilling.

Come back next weekend for another DVDanger and the weirdest feminist revenge double bill ever: American Mary and Ninja III: The Domination.